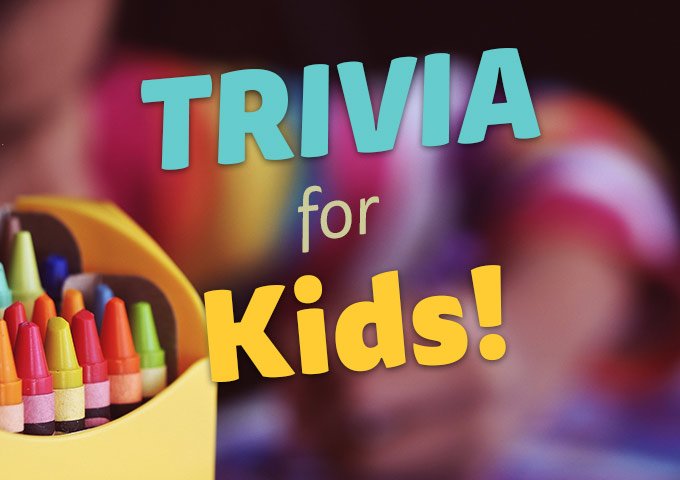 Take the time to celebrate and have with your kid/kids on this day that is dedicated to them in the whole world. Organize fun trivia questions for kids and ask some interesting questions for them to gain in-depth knowledge on various topics like sports, space, maths, animals, etc.

Kids’ trivia questions are fantastic for boosting a child’s confidence and knowledge, the reason we have specially created these trivia questions and answers is so you can make this special day memorable for your kids. Trust me, your kids will also get to learn some cool fun facts after this game. The questions are designed to be short and easy for kids to understand.

1. What is the total number of colors in a rainbow?
Answer: 7

2. What is used to measure temperature?
Answer: thermometer

3. What animal is the fastest on land?
Answer: The cheetah.

4. The largest of the big cat family is?
Answer- Tiger

5. A spider has how many legs?
Answer: Eight

6. Which is the biggest animal on earth?
Answer: Blue Whale

7. What is the only Substance on earth you can use to cut a diamond?
Answer: Diamond

8. A baby goat is called what?
Answer: Kid

9. Name the largest planet in our solar system?
Answer: Jupiter

10. The zoo is a place to see what?
Answer: animal

11. What is the number of wheels on a tricycle?
Answer: Three

12. Which part of the body do you use in seeing?
Answer: Eye

14. The smallest planet in our solar system?
Answer: Mercury

16. Which animal is the heaviest land mammal?
Answer: Elephant

17. What city was the birthplace of the Olympic Games?
Answer: Athens, Greece

18. What do you get when you boil water?
Answer: Steam

19. Which color will you get when you mix blue and yellow pigment?
Answer: Green

20. Which part of the human body pumps blood around the body?
Answer: Heart

21. How many bones do sharks have you their body?
Answer: 0

23. A group of crows called is called what?
Answer: A murder.

24. What is the total number of Olympic rings?
Answer: 5

25. The stars on the American flag are what color?
Answer: White

26. Which part of the body do humans use to think?
Answer: Brain

27. Which country has the highest population in the world?
Answer: China

28. How many players play for a team in a standard football game?
Answer: 11

29. Which place in the world is Eiffel Tower located?
Answer: Paris, France.

30. Where is a statue of liberty located?
Answer: New York

31. A group of lions is called what?
Answer: Pride

33. Where do the United States presidents live?
Answer: The White House

34. Name the smallest country in the world.
Answer: Vatican City

35. The largest ocean on earth is called?
Answer: The Pacific.

36. Octopus has how many arms?
Answer: Eight.

37. The Great Pyramid of Giza is located in which Country?
Answer: Egypt

38. How many planets are in our solar system?
Answer: Eight

39. Name the hottest planet in the solar system.
Answer: Venus

40. What are the primary colors?
Answers: Red, Yellow, and Blue

41. Which country was golf first played in?
Answer: Scotland

42. Which bird has the ability to imitate human speech?
Answer: Parrot

43. Which of the human body’s internal organs is the largest?
Answer: The Liver

44. Where does Santa Claus live?
Answer: The North Pole

46. What Medal does someone who comes third in an Olympics game win?
Answer: bronze

48. What does color means stop at a traffic light?
Answer: Red

49. Which is the largest organ in the human body?
Answer: The skin

50. A baby dog is called what?
Answer: Puppy

54. What is a female elephant called?
Answer: A cow.

55. How big is a basketball hoop’s diameter?
Answer: 18 inches

57. A million contains how many zeros?
Answer: 6

58. An animal that can live both on the land and in the water is called?
Answer: An amphibian.

59. What is the most common species of bird on earth called?
Answer: Chicken.

60. What do bees produce that humans eat?
Answer: Honey

62. How many arms does a starfish have?
Answer: Five

63. A group of wolves is called?
Answer: A pack

64. What is the nearest planet to the Sun in our solar system?
Answer: Mercury.

65. Which elements make up pure water?
Answer: hydrogen and oxygen.

66. Which country is the biggest by landmass?
Answer: Russia

67. Which planet is known to have the most gravity in our solar system?
Answer: Jupiter

68. How many edges does a triangle have?
Answer: 3

70. Which continent is the smallest in the world?
Answer: Australia

72. The longest bone in the human body is called?
Answer: Femur.

73. Paper money was first used in which country?
Answer: China

74. The planet in our Solar System known for having a ring is called?
Answer: Saturn

75. Which animal is the tallest in the world?
Answer: Giraffe

76. A group of sheep is called?
Answer: flock

77. The eclipse that occurs when the Earth is between the moon and the sun is called?
Answer: A lunar eclipse

78. Which is the fastest flying bird in the world?
Answer: Peregrine Falcon

79. What causes things that go up to fall down?
Answer: gravity

80. What is the largest continent.
Answer: Asia

81. The only flying mammal is called?
Answer: Bat.

82. The process that water changes to vapor when heated is called?
Answer: Evaporation

84. Which country gifted the Statue of Liberty to the United States?
Answer: France

85. A person that flies an airplane is called?
Answer: A pilot

86. Who was the first man to step on the moon?
Answer: Neil Armstrong

87. The tallest mountain on Earth is called?
Answer: Mount Everest

89. The preserved bones of extinct animals are called?
Answer: Fossils.

90. Which is the largest continent?
Answer: Asia

91. The closest star to Earth is?
Answer: The sun

92. Which direction does the Sunrise from?
Answer: The east

93. Name the only bird that can fly backward.
Answer: A hummingbird.

94. What is the largest city in the world by population?
Answer: Tokyo, Japan.

95. The longest river in the world is?
Answer: The Nile

97. How many bones does a human newborn have when he or she is born?
Answer: 300

98. Invertebrates are animals without which type of bone?
Answer: Backbone

99. How many sides are there in Octagon?
Answer: Eight

100. The study of the Weather is called?
Answer: meteorology

101. Which is the coldest continent on earth?
Answer: Antarctica

Hope you enjoyed these trivia games with your kids? Please leave a comment and share it with your friends and family. Also check out 89 Fun and Interesting Trivia Questions and Answers for Kids.