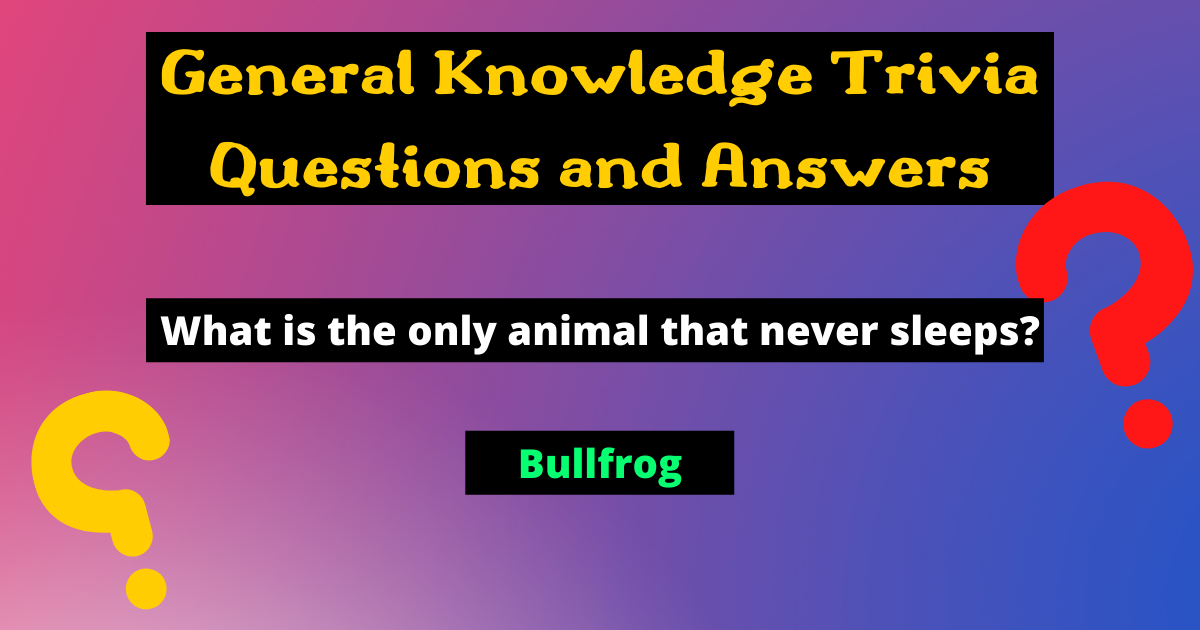 Interesting and Uncommon general knowledge trivia questions and answers to test your knowledge on random topics. Grab a cup of coffee and let’s get started.

1. How many US states share a border with Canada?
13

2. What is the name of the tallest mountain on earth?
Mount Everest

3. How many federal states does Germany have?
16

4. What is the name of the slowest animal in the world?
Three-toed Sloth

5. Mount Killimajo is located on which continent?
African

6. Which continent did tomatoes originate from?
South America

7. Most coffees in the world are produced in which country?
Brazil

8. What is the capital of Spain?
Madrid

9. The original Axis powers in World War II Were made up of which countries?
Germany, Italy, and Japan

10. The most populated country in the world is?
China

11. What is the largest state in the United States?
Alaska

13. Who was the most powerful leader in Persia in the 6lh century B.C?
Cyrus

15. Which Mammal Has The Most Powerful Bite In The World?
Hippopotamus

16. Which country did pizza originate from?
Italy

18. The fear of dogs is called what?
cynophobia

19. What is the biggest animal in the world?
Antarctic Blue whale

20. What is the biggest ocean in the world?
Pacific Ocean

21. How many countries are in North America?
28 sovereign countries

22. What is the highest currency in the world as of 2021?
Kuwaiti Dinar or KWD

23. What is a group of lions called?
A pride

24. Which part of the Dog’s body does it sweat from?
Under their feet

25. What is the name of the highest waterfall in the world and where is it located?
Angel Falls, Venezuela

26. How many languages are written from right to left?
12

27. What is the name of the longest river in Africa?
The Nile River

28. The United States shares a land border with how many countries?
2

29. A cockroach has how many heart chambers?
12

30. A Crossbreed Between A Zebra And A Donkey is Called what?
Zonkey

31. What are the three primary colors?
Red, yellow, and blue

32. How many countries are still using the shilling as currency?
4

33. What is the capital of Mexico?
Mexico City

34. How many countries list “Spanish” as an official language?
20

35. Which bird is a universal symbol of peace?
A Dove

36. What Is A Female Elephant Called?
A cow

37. Tea was invented in which country?
China

38. Samsung is the biggest technology company in which country?
South Korea

39. What is the biggest country in the world in terms of landmass?
Russia

40. What is the smallest country in the world?
Vatican City

41. Which animal has the highest blood pressure?
A Giraffe

42. The bird that can’t move its eyeballs is?
Owls

45. What is the capital of Canada?
Ottawa

47. What is the only animal that never sleeps?
Bullfrog

48. What is the world’s fastest land animal?
Cheetah

49. How many pairs of wings does a bee have?
Two

Please Check out our 31 General Knowledge Trivia Quiz on youtube.

51. Which American president appears on a one-dollar bill?
George Washington

52. Which country are the Great Pyramids of Giza located in?
Egypt

53. Which ocean is Bermuda Triangle located in?
North Atlantic Ocean

54. How many Dogs survive the Titanic disaster?
3

55. Which Bird Can Learn To Mimic Human Speech?
Parrots

56. Which language has the most words in the world?
English

57. What is the name of the first soft drink in space?
Coca Cola

59. What is the name of the first black United States president?
Barack Obama

60. What country has the most natural lakes?
Canada

61. Which country has the country code of “ZA”?
South Africa

62. A female deer is called what?
Doe

63. What animal is considered the symbol of the USA?
Bald Eagle

64. What’s the most expensive home in the world?
Buckingham Palace

65. What manufactured drink is most consumed in the world?
Tea

69. Which bird is a symbol of good luck?
Storks

70. What Color Is Octopus Blood?
Blue

71. How long does it take to hard boil an egg?
Seven minutes

72. What is the only edible food that never decays?
Honey

73. What is the last letter of the Greek alphabet?
Omega

74. What is the name of the fastest fish in the sea?
Sailfish

75. What planet is closest to Earth?
Venus

76. What is the capital of New Zealand?
Wellington

77. Which animal does not drink water?
Kangaroo rat

78. Which Insects Cause Malaria?
[Mosquitoes

79. What is the hardest rock?
Diamond

80. What is the currency of Poland?
Złoty

82. What is the name of the river that flows through the Brazilian rainforest?
The Amazon

83. What is the most populous Muslim-majority country as of 2010?
Indonesia

84. Which animal has the longest lifespan?
Arctic whale

85. Which Animal Has The Shortest Pregnancy?
Opossum

86. How many bones do sharks have in their bodies?
0

87. Which country was ice cream invented in?
China

88. Where in England was William Shakespeare born?
Stratford-Upon-Avon

89. What title does the leader of Mexico hold?
President

90. What is the coldest place on Earth?
Antarctica

91. The group of young pigs is called?
Drift

92. What Is The Largest Living Organism?
Aspen grove

93. What is the name of the world’s biggest island?
Greenland

94. Which two countries have not missed one of the modern-day Olympics?
Greece and Australia

96. How many teaspoons of sugar are in a can of coca-cola?
7

97. What is the driest continent on Earth?
Antarctica

98. What is the name of the only animal that cannot jump?
The Elephant

99. What is the fastest bird in the world when it is Hunting Dive?
Peregrine Falcon

100. What does the term “piano” mean?
To be played softly

101. Which country won the first-ever soccer World Cup in 1930?
Uruguay

Did you enjoy playing these general knowledge trivia games? Leave a comment below and share if you like the content. Try answering this  animal trivia questions game or Try solving 6 Tricky Detective Riddles for Adult Deep