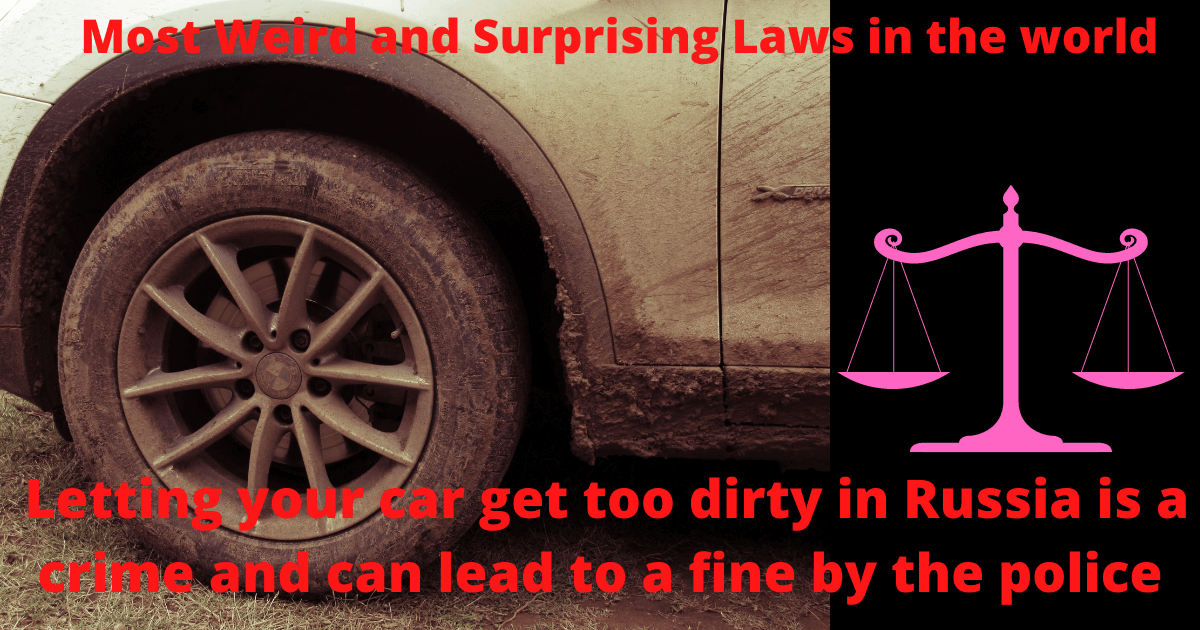 20 Most weird and Surprising Laws in the world

There are laws that when mentioned you understand the need for it without asking questions, why do some of them get a lot of people confused about the need for such laws. Although some of these laws may stem from religious beliefs and culture, others may be because of abuse about a particular thing. Do you know that Letting your car get too dirty in Russia is a crime and can lead to a fine by the police? In this interesting article, we have complied 20 most weird and surprising laws around the world, trust me, you may find some of them unbelievable.

The following are some of the weird laws and regulations in the world that some people find had to believe exist:

1. In a country like Singapore, it is illegal to chew gum there, and importing chewing guns except dental gums can lead to heavy fines and jail terms.

2. There is a lot of patriotism in Canada, as their radio stations are only allowed to play music from Canadian artists at least 35 percent of the time.

3. A way of telling you to always look after your car, it is illegal in Germany to run out of gas while driving on the Autobahn.

4. For those who like to hike naked, you may need to cover your body as it is illegal to hike naked in Switzerland.

5. When you are on a vacation in Greece, remember that it is illegal to wear high heels in the acropolis.

6. Venice, Italy is characterized by pigeons, but in 2008, Venice lawmakers banned the feeding of these animals by tourists.

7. It is quite weird that in a country like Poland, it is not acceptable to wear Winnie the Pooh t-shirts.

8. I know that you love taking selfies while visiting a city, but you are not allowed to take selfies with tigers in New York.

9. Saint Kitts is probably decent with the choice of words people use as swearing is illegal in this country.

10. In some countries, you are allowed to give your kids any name that you want, but in Denmark, you can only give your kids 7,000 government-approved baby names.

11. Whenever you are in Jamaica or Barbados, you are not allowed to wear Camouflage in these countries.

12. In Thailand, it is illegal for you to say forbidden words against past and present monarchs, and doing so can lead to 3 to 15 years in jail.

13. In a city like Vermont, the husband must give the wife an okay before she can get a false tooth.

14. It is a crime in Alabama to wear fake beards in places of worship like churches.

15. Although the existence of Bigfoot has not been proven, killing it in Washington attracts a fine of $1100.

16. In a country like Switzerland, it is illegal for you to do laundry on Sundays and it can lead to two days in jail.

17. Letting your car get too dirty in Russia is a crime and can lead to a fine by the police.

18. In Cambodia, water guns are prohibited during the celebration of New year’s eve.

19. There is a fine attached if you are found driving a muddy car in Japan.

20. In Spain, it is illegal for you to drive your car with a flip flop as it is considered what aids accidents.

Hope you enjoyed uncovering these 20 Most weird and Surprising Laws in the world. Please leave a comment and share it with family and friends. Do you know that “Wife Carrying” is actually a sport in Finland? Check out more 30 Weird and Surprising Sports Around the World.