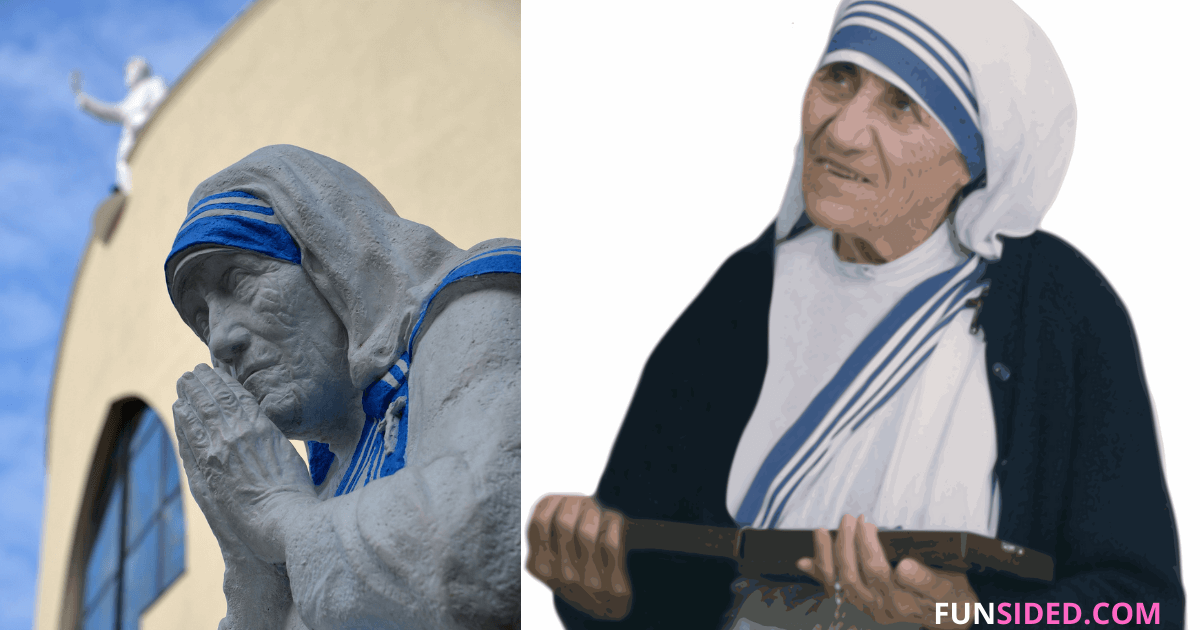 Mother Teresa was very selfless in nature and remains arguably one of the greatest humanitarians to have graced the earth. Her missionary works towards the poor and less privileged will always be remembered. We will be wowing you with some unusual and mind-blowing facts about Mother Teresa.

1. Mother Teresa was multilingual as she was able to speak up to five languages of which are English, Hindi, Bengali, Albanian and Serbian. These attributes aided her level of communication with different people across the continent.

2. As the saying goes, not all heroes wear capes, in 1982, Mother Teresa rescued 37 children trapped in a war-torn zone Hospital in Beirut.

3. Born on the 26th of August, 1910 in Macedonia, Agnes Gonxha Bojaxhiu famously known as Mother Teresa was born into a well-respected and buoyant family.

4. In 1979, she won the prestigious Nobel Peace Prize Award for her charitable works and services to the poor.

5. Majority of mother Teresa charitable works was done in the Slum in Kolkata, India because of their unhealthy living conditions and lack of access to running water.

6. Mother Teresa’s middle name Gonxha means ‘little flower”. The little flower actually blossomed as she touched many lives during her lifetime on earth.

7. Unfortunately, Mother Teresa died on the 5th of September 1997 at the age of 87 years old due to a heart problem.

8. Mother Teresa was canonized as a Saint at the Roman Catholic Church in 2015 by Pope Francis and she’s now referred to as St Teresa of Calcutta.

9. Mother Teresa’s father died at the age of 8.

10. At the age of 18, Mother Teresa left home to join the Sisters of Loreto in Ireland.

11. Interestingly, Agnes had always had a soft spot for missionaries as a kid and she knew religious vocation was her calling at the age of 12.

12. Since leaving home in 1928, she never went back home to see her family members till she passed away.

13. For over 20 years, Mother Teresa worked as a teacher at the Loreto convent school in Eastern Kolkata before becoming the Headmistress of the school in 1944.

14. After been given the green light by the Vatican, Mother Teresa opened a new congregation on the 7th of October 1950 known as Missionaries of Charity in Kolkata, India.

15. Mother Teresa was bestowed upon Indian’s highest individual civilian honor after been awarded the Bharat Ratna in 1980.

17. Her opinion on contraceptives and abortion drew heavy criticism from different people across the globe.

18. Interestingly, Mother Teresa met Princess Diana in New York in her final days on earth. Shockingly, both died a week apart from each other.

19. In the Gallup yearly polls, Mother Teresa was voted by Americans as one of the ten most admirable women 18 times during her lifetime.

20. Agnes’ mother taught her a lot about helping the poor as she will fondly say that “My child, never eat a single mouthful unless you are sharing it with others”.

21. During a visit to India in 1964, Pope Paul VI once gifted his ceremonial Limousine to Mother Teresa of which she later used to raise help for the leper colony.

22. Despite lacking the required equipment and tools to impart knowledge in the slums of Kolkata, Mother Teresa was able to teach the children in the slums how to read and write with wooden sticks.

23. Mother Teresa received up to 120 honors and awards during her lifetime due to her charitable works to humanity.

24. It might sound a bit strange but Mother Teresa once broke her collar bone and had two heart attacks while on her humanitarian missions.

25. Mother Teresa’s charitable works didn’t go unnoticed as she was given the rare opportunity to speak at the Vatican and the United Nations.

26. September 1946 will always be a landmark moment for Mother Teresa as it was believed she received what she described as “A Call within a Call” from God while on a train journey to Darjeeling.

27. The white sari with blue stripes remains synonymous with the missionaries of charity with the white color symbolizing Purity while the Blue stripes signify poverty, chastity, obedience, and wholehearted service to the poor.

28. Mother Teresa inspired some of her old students to follow in her footsteps. A notable mention includes Magdalena Polton, which later became Sr. Gertrude.

29. Mother Teresa once described herself as a “Pencil in the hand of God sending love to the world”.

30. Mother Teresa wasn’t the Tallest of individuals as she was only 5ft tall.

31. Mother Teresa divided opinion amongst a lot of Indians as some see her as a racist while others view her as a symbol of colonialism.

32. Mother Teresa Missionary of Charity is still going strong to date as they now have over 4,500 member organizations across the globe.

33. British medical journalist, Robin Fox once criticized the quality of medical care been dished out to patients at the Kolkata center and branded it below par.

35. Interestingly, a torn-up letter written by Mother Teresa shockingly suggested that she was reportedly forced out of Belfast in the 1970s.

36. Mother Teresa came under huge criticism in 1981 after receiving an award from Jean-Claude Duvalier: a dictator known to have stolen millions from his people who are impoverished.

37. In 1995, Mother Teresa’s stance on “No to Divorce” in Ireland fell on deaf ears with many Irish voters opting for legalizing divorce and remarriage.

38. Mother Teresa’s posthumous letters caused quite a controversy due to revelations that she suffered some form of disconnection from God during the latter stages of her life.

39. Mother Teresa was eulogized by many world leaders for her humanitarian works and a notable mention includes former President of the United States, Ronald Reagan describing her as the true definition of “Kindness & Compassion”.

41. Despite being given birth on the 26th of August, Mother Teresa usually celebrated her birthday on the 27th of August because she was baptized on that day.

42. Mother Teresa enjoyed doing her charity works such that while on the hospital bed, she told the nurses she can’t breathe because she is currently out of work.

Did you find these Mother Teresa Facts interesting? Leave a comment below and share if you like the content. Do you know that when a person dies they have an estimated 7 minutes of brain activity left? Click to see more interesting psychological facts