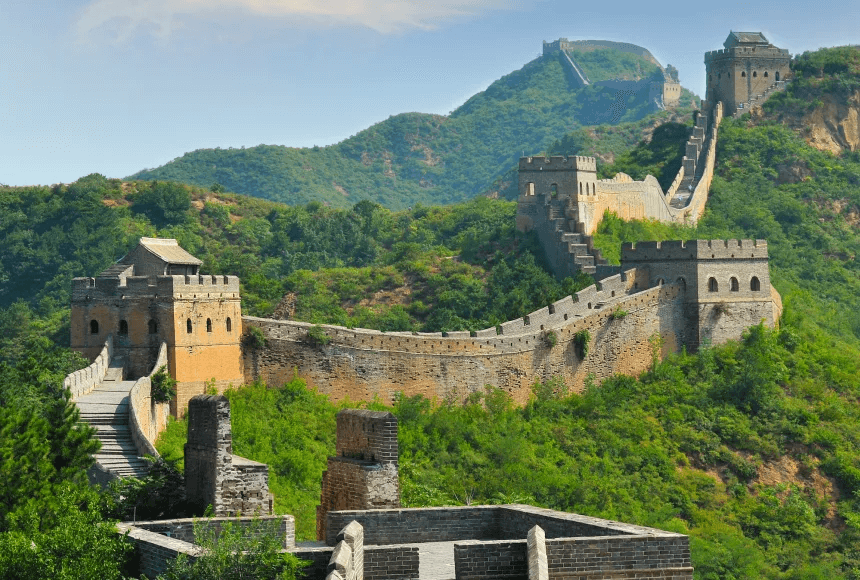 The Great Wall of China is the longest man-made structure in the world, and it is indeed a unique world heritage site and a symbol of China. But guess what? The Great Wall is not one wall in a single line. It is a composition of numerous walls joined together.

Again, this significant Chinese landmark has proven to stand the test of time as it has been around for centuries. But do you know the secret element that has held the Wall in place all these years? Or do you know why the Wall is dubbed “The Longest Cemetery in the World”?

In this fun-filled article on the Great Wall of China will answer all your questions and enlighten you on many other things you did not know about this famous landmark. Read on!

1. Firstly, you need to know that the speculation that the Wall is visible from space with the naked eye is false.

2. The Great Wall of China was not a regular wall. It served as a means of fortification, a military barrier, to guard and protect the Chinese against the invasion of northern nomads.

3. Building the Great Wall of China was not an individual effort. More than 20 dynasties and states have shouldered the responsibility of erecting the walls, section by section, bit by bit.

4. Due to depletion, 30% of the Wall does not exist anymore.

5. The Ming Dynasty built the majority of the Wall. The well-maintained part of the Great Wall that exists today is the construction that was done by the Ming Dynasty.

6. The building of the Great Wall was a massive project, carried out by all and sundry. It took over 1,000,000 persons to get the work done eventually.

7. Emperor Qin Shi Huang of the Qin Dynasty is the man who commenced the Great Wall project, as an approach to the unification of China.

8. During the Qin and Han dynasties, construction, supervision, and maintenance of the Wall served as a method of giving special punishment to convicts.

9. The Great Wall of China is not just a long line of walls. It consists of doubled-up walls, watchtowers, fortresses, and barracks to accommodate soldiers.

10. Statistics collected by China’s State Administration of Cultural Heritage (SACH) reveal that the Wall is 21,196 kilometers or 13,170 miles long.

12. In 2007, the Great Wall of China became inclusive as one of the New Seven Wonders of the World.

13. They are more than 10,000 watch towers on the Wall, which were used mainly to transmit signals during invasions or battles.

14. During his time, Emperor Qincatered for the soldiers who protected the wall and even wanting as far as making marriage arrangements for them. All to keep the work going!

15. The independent walls of the Great Wall were built earlier when China was not yet unified as a country.

16. The Great wall served as the first unified wall of China.

17. The only dynasty that did not build the Great Wall after the unification of China, is the Yuan Dynasty since it was established by the Mongolians.

18. The Great Wall was highly vandalized and destroyed during the Cultural Revolution of China, as people moved many bricks were moved to build civilian houses.

19. It was not until 2006 that there became a clear-cut law on the conservation of the Wall.

20. Before the 20th century, the Great Wall wasn’t always a Chinese heritage and did not hold much importance to China, until it was popularized by the Europeans.

21. Instead of cement blocks, the materials used to erect the Wall included rammed earth, bricks, stones, and rocks.

22. It is estimated that around 400,000 builders died during the construction of the Wall, thereby earning the site the title of “The Longest Cemetery in the World”.

23. Being a Chinese invention, wheelbarrows were of very essential importance to the building of the Wall, as they aided the movement of building materials.

24. The area has been protected as a UNESCO World Heritage Site since 1987.

25. According to the Guinness World Record, the main-line length of the Great Wall is “nearly three times the length of Britain”.

26. The Jiankou Section is the most dangerous part of the Great Wall. The steps leading up to the wall in this section are very steep and there are cliffs on each side.

28. Several heads of state and VIPS of the world have visited the Great Wall including Queen Elizabeth II, who is also the first British monarch to visit China.

29. The story of Lady Meng Jiangsu is the most popular and widely spread of all the legends about the Great Wall of China.

30. There was a white rooster ritual usually carried out by family members of those who died during the construction of the Wall, as a means of sending their souls to an eternal rest so that their souls would not be stuck at the Wall.

31. They are shrines located on the Wall that pay tribute to Chinese legends and notable figures.

32. The Wall did not fully serve its purpose of protection as the invasion through the Wall in the 17th century resulted in the fall of the Ming dynasty.

33. The Great Wall was not cemented, just like many buildings in the 21st century. Instead, the builders used a type of adhesive made from rice to hold the walls together!

34. It has been scientifically predicted that the Wall may disappear in the next couple of decades since most parts of it are currently facing severe decay and weathering out.

35. More and more sections of the Wall are still being identified, the most recent one being found in 2012.

36. The Great Wall of China goes by many nomenclatures. Some call it “The Chinese Wall”, but its official name in Chinese is “Wan Li Chang Cheng”.

38. Till today, the bullet marks from the last battle that was fought at the Great Wall (the Sino-Japanese War), can still be seen in the Gubeikou Section of the Wall.

39. During the Chinese Cultural Revolution led by Mao Zedong, the Great Wall was seen as a symbol of tyranny and despotism.

40. Painting graffiti on the Great Wall, littering its surroundings and any other types of vandalism are highly prohibited.

41. The Badaling section is known to be the best preserved and the most representative part of the Great Wall. It is also the most visited by tourists.

42. Although the Great Wall is tagged the “Longest Cemetery in the World”, in reality, no bodies have been found buried in it.

43. With over hundreds of thousands of steps, it is estimated to take 18 months to walk the entire length of the Great Wall.

44. Nobody is allowed to organize activities on the Great Wall that are not open to the public.

45. A chemical element known as arsenic was used in the construction of the Wall. Thus, it is safe to say that the Great Wall of China is indeed poisonous.

47. The only person who was able to successfully break through the defense system at the Great Wall on multiple occasions, was Genghis Khan, the founder of the Mongol Empire.

48. There is a section of the Wall that stretches close to the China-North Korea border. Historians believe that the wall extended into North Korea in the past.

49. There are watch holes and shooting holes in the wall installed on the wall, which enables the military archers to shoot at enemies tactically.

50. The Simatai section of the Wall is the only one that opens to tourists at night.

51. 1n 1908, William Edgar Geil, a US explorer, and geographer, became the first person to complete hiking the entire length of the Great Wall, and it took him 5 months.