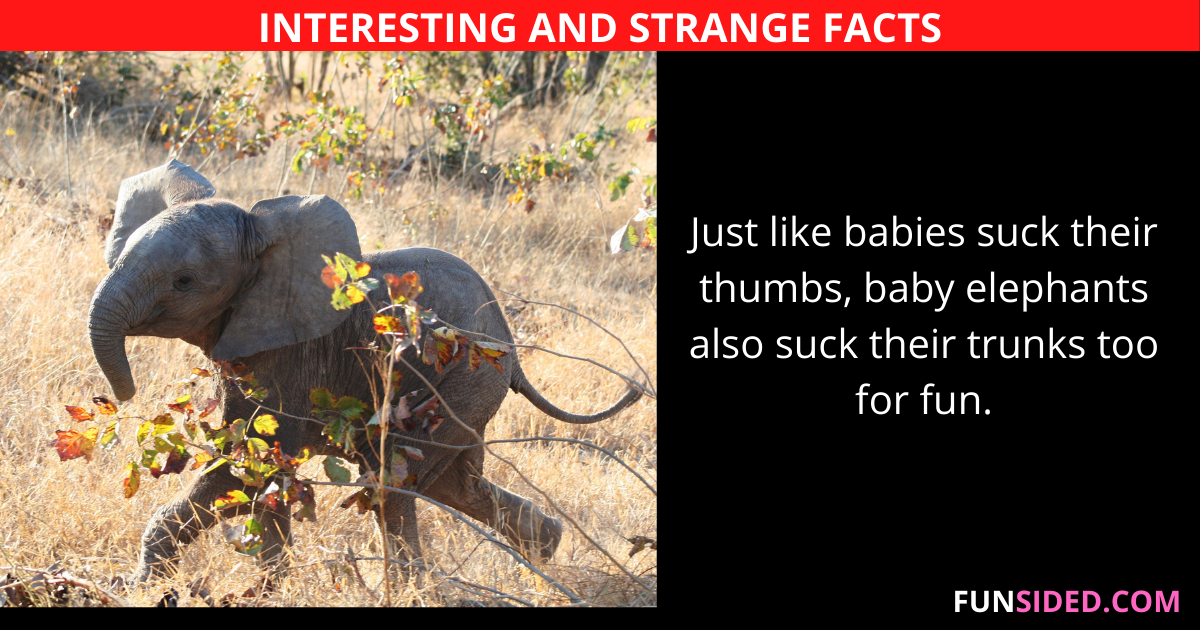 Strange facts that cut across various spheres in our world are quite fun and interesting. In the article below we will be exploring some bizarre and jaw-dropping facts that will keep you on the edge of your seats and make you wiser.

1. Just like babies suck their thumbs, baby elephants also suck their trunks too for fun.

2. In Utah, it’s illegal to swear in front of a dead person.

3. Prior to settling for Keanu Reeves as character Neo in “Matrix”, Will Smith, Nicolas Cage, Tom Cruise, Johnny Depp, and Leonardo Di Carpio were offered the role but they rejected it.

4. Whenever a Cat head-butts you, it simply means they trust you. It’s called “Bunting”

5. Divers who recover golf balls from lakes can surprisingly earn up to $150,000 a year.

6. Carrying ice cream in your back pocket in Kentucky is deemed illegal.

7. The largest populated area on the planet that is rat-free is called Alberta in Canada.

8. Interestingly, teachers in Russia were once paid in Vodka.

9. The fear of being hurt in a relationship is called Pisanthrophobia.

10. Owning a cat amazingly reduces the risks of strokes and heart attacks.

11. Paramedics are trained not to run to treat patients. Walking keeps them calmer on arrival and helps them operate at peak effectiveness.

12. The Roman Empire is the longest in history as it lasted for over 1,000 years.

13. Running for 30-40 minutes for five days can reduce cellular aging by nine years.

14. Tea made from banana peels contains the precursor to serotonin and can aid sleep and reduce depression and can curb cravings for unhealthy foods.

15. Killing an Elephant in Sri Lanka is directly proportional to death.

17. When you find it difficult to sleep on your first night in a new place or environment, it’s called the “First Night Effect” in humans as the brain is trying to keep us half alert to possible dangers.

19. Interestingly, potatoes have all the nutrients humans need to survive.

20. It might sound a bit strange but humans only need to shower every two to three days as a daily shower can cause irritated or cracked skin.

22. Sounds weird but in Japan, Doctors would prescribe “Forest Therapy” to combat depression and anxiety. It is believed that the scent from trees increases brain activity and boosts your immune system to fight stress in your body.

24. According to research, Men spend about 7 hours per year hiding in the bathroom for peace and quietness.

25. The Dutch village of Giethoorn has no roads and everywhere is connected by either a footbridge or a canal.

26. Japan and Singapore have the most powerful passports in the world with each granting visa-free access to over 189 countries.

27. Jamaica is the only country in the world whose flag doesn’t contain a touch of red, white, or blue.

28. On average women smile up to 62 times a day while Babies smile at least 200 times per day.

29. Quite interesting to know that only 5% of the world population has ever been on an airplane.

30. Weird but true, legendary actor Morgan Freeman wears earrings worth enough to pay for a coffin in case he dies in a strange place.

31. The most rigged election in the world was the Liberian general election in 1927 where the winner received a total of 243,000 whereas only 15,000 registered voters.

32. In 2012, a man named Nathan Grindal was shockingly kicked out of a darts tournament because it was believed that he looked like Jesus.

33. Interestingly, when a US Navy ship returns from deployment, sailors whose wives just gave birth while they are away are allowed to get off before the others.

34. During World War II, French women having babies with German soldiers were punished by shaving off their heads as a sign of betrayal to their country.

35. Until 1681, Christmas used to be illegal in Massachusetts Bay Colony as people singing carols are seen as disturbing the peace of the society.

36. A man who refused to identify himself has been imprisoned in Canada since 2013. He is often called the “Unknown Person” with his fingerprints matching four separate identities.

37. The Anji bridge in China is the oldest stone arch bridge in the world. It is believed to be around 1,400 years old and has survived at least ten major floods, different earthquakes, and various wars.

38. Holding a sneeze is highly detrimental to the body as it risks rupturing the throats, damaging the ears, and also suffering a brain aneurysm.

39. At a staggering 125 feet, the biggest and fifth oldest tree (3,500 years ) in the world was destroyed by a fire that was accidentally started by a woman smoking meth in Longwood, Florida.

40. The Okinawa Island in Japan is often considered as the Island of longevity due to the high rates of people living their reaching over 100years of age before dying.

42. Majority of toilet paper sold for homes in France is usually Pink.

43. Of all the statues in the world, Buddhas have eight of the largest ten.

45. Sounds crazy but digging a hole in China is insanely possible if you start from Argentina.

46. White strawberries are called PineBerry and they taste like pineapples.

47. As of 1998, over half of the population of Iceland believes in the existence of elves.

48. Interestingly, India has a bill of rights for cows.

49. Grapes are believed to explode when you put them in the microwave.

50. In 1980, a hospital in Las Vegas suspended workers for betting on when a patient would die.

52. There are libraries in Los Angeles that let kids read in an attempt to pay off their late fees. Each kid gets $5 off their debts per hour for reading at the county-run libraries.