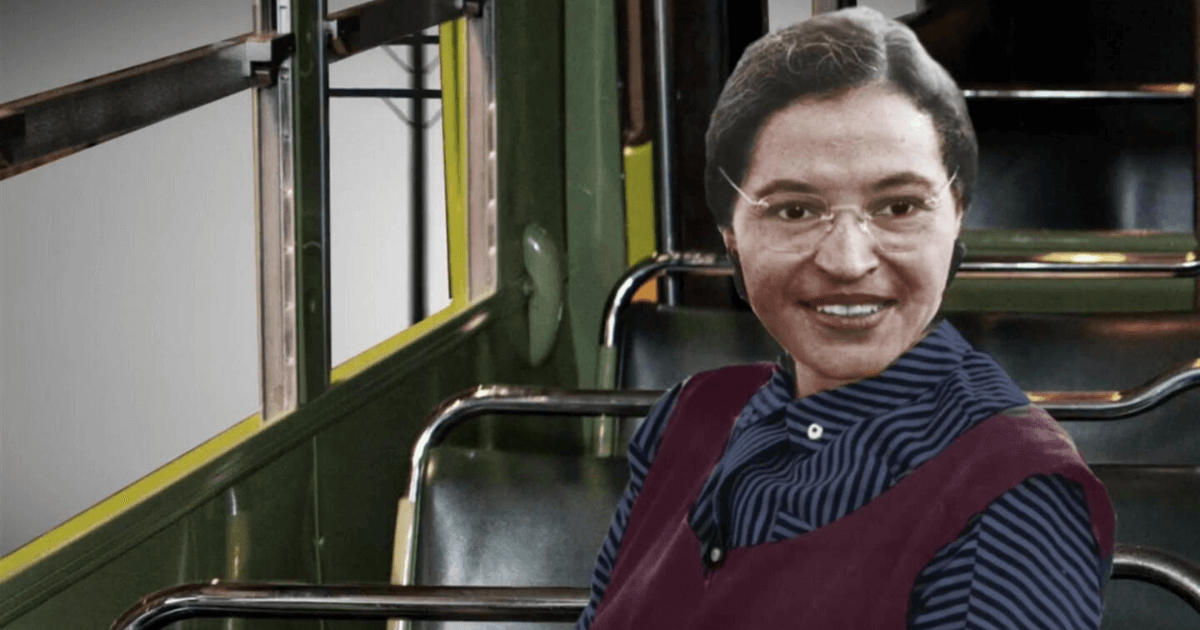 The civil rights movement in the United States of America will never be complete without the name “Rosa Parks” who is known for fighting against racial inequality and segregation against the Black community. In the article below, we will be exploring some unbelievable and unknown facts about the fearless Rosa Parks that will blow your mind;

2. On the contrary, 15-year-old Claudette Colvin was the first black American woman to be arrested for refusing to give up her seat on the Montgomery Bus nine months earlier not Rosa Parks.

3. As a proud member of the National Association for the Advancement of Colored People (NAACP) Montgomery chapter, Rosa Parks was already an Activist prior to her arrest.

4. Rosa Parks ancestral lineage includes African, Scot-Irish, and Native American roots. Her mother named Leona was a teacher while her father James McCauley was a Carpenter.

5. Interestingly, Parks graduated high school in 1933 at a time whereby only 7% of African-Americans struggled to get a high school diploma.

6. Rosa Parks autobiography was published in 1992 and it was titled “My Story”.

7. Rosa Parks initially had a prior encounter with James Blake the driver who told her to vacate her seat on the bus for a white person back in 1943 before the infamous event that occurred in the Montgomery Bus twelve years later. Parks stating it expressively in her biography that “I never wanted to be on that man’s bus again,” and was always conscious of whoever was driving the bus before boarding one.

8. The Montgomery Bus Boycott was facilitated by Rosa Park’s arrest and it lasted for a staggering 381 days.

9. Parks initial arrest in 1955 didn’t deter her to keep fighting for equal rights as she and 114 others were arrested again a year later for going against the bus segregation laws during the Montgomery bus boycott.

10. Before moving to Detroit in 1957, Rosa Parks and her husband lost their jobs and received countless death threats during the famous Montgomery Bus boycott.

11. Her struggle and fight against inequality and discrimination didn’t go unnoticed as she was named as Top 20 most influential people of the 20th century by Time’s magazine.

12. In addition, she also got the Presidential Medal of Freedom and the Congressional Gold Medal respectively by President Bill Clinton and the US legislative branch.

13. At the age of 92, Rosa Parks was finally laid to rest at Detroit’s Woodlawn Cemetery with over 50,000 people gracing her funeral.

14. Only a few came close as Parks remains the first black woman to be honored with a statue in the US Capitol.

15. One of her famous quotes goes thus; “We are here on Earth to live, grow up, and do what we can to make this world a better place for all people to enjoy freedom.”

16. Rosa was a strong member of the Planned Parenthood Federation of America as she was also an advocate for women’s rights.

17. Parks endured a Torrid period during the 1970s as she lost her brother and husband and also had issues financially due to several commitments made towards the civil rights movement.

18. Martin Luther King Junior emphasized the importance of Rosa Parks stance on segregation having said, “Actually, no one can understand the action of Mrs. Parks unless he realizes that eventually, the cup of endurance runs over, and the human personality cries out, ‘I can take it no longer.’”

19. Despite the heavy downpour on the Monday of the famous Boycott, the black community turned up in large numbers and made sure it was a massive success.

20. The success of the Boycott led to the creation of the Montgomery Improvement Association known as the MIA of which Martin Luther King was elected as the leader of the association.

21. Rosa Parks was a proud member of the African Methodist Episcopal church.

22. Rosa Parks’s husband was a Barber and they eventually got married in 1932.

23. Unfortunately, Parks never had a child throughout her lifetime.

24. Before she could register to Vote in Jim Crow Alabama, it took her three attempts.

25. Her courage and fierceness were always commendable as she worked for the NAACP as the lead investigator and activist against sexual assault against black women.

26. As the saying goes, knowledge is power. Rosa Parks attended the Highlander Folk School in 1955 in an attempt to boost her activism skills in a civil and respectful manner.

27. Parks also worked as a seamstress in a local store.

29. Talks of her not giving up her seat on the Montgomery Bus wasn’t due to tiredness but Parks being tired of giving in to the oppression and segregation against Black folks.

31. It might sound a bit weird but it is believed that both Parks and Martin Luther King Jr. weren’t as close as projected with the duo disagreeing on many occasions.

32. Rosa Parks also worked at the Hampton Institute as a Hostess.

33. Shockingly, Rosa Park’s trial only lasted for just thirty minutes, and she was fined up to $14 for violent and disorderly conduct.

34. In the Henry Ford history museum in Michigan, Bus no 2857 on which park was arrested can be seen on display.

35. Wouldn’t expect less as Rosa Parks is fondly called “The Mother of the Civil Rights Movement.”

36. Parks won numerous awards for indefatigable nature of which includes the Spingarn Medal by the NAACP and the Martin Luther King Jr. Award.

37. In a bid to honor Rosa Parks, the 12th street in Detroit was renamed the “Rosa Parks Boulevard.”

38. Parks was officially inducted into the Michigan Women’s Hall of Fame in 1983.

39. She co-founded the Rosa L. Parks Scholarship Foundation of which is aimed at awarding scholarships to Michigan High school seniors who demonstrate exceptional academic skills and involvement in the community.

40. Parks was among the few invited to Nelson Mandela’s welcoming Party after he was released from Prison.

41. Rosa Parks once had a cameo appearance in a popular TV series called Touched by an Angel.

42. In the early 2000s, Parks won the Alabama Academy Award and also the Governor’s medal of honor for Extraordinary courage.

43. Rosa Parks was also a well-respected member of the Alpha Kappa Alpha sorority.

44. Quite amazing to note that Parks was awarded over two dozen of honorary doctorates degrees across the globe.

46. It was believed that she suffered from Dementia in the latter stages of her years before eventually passing away on the 24th of October 2005.

47. In honor of Rosa Parks, the American Public Transportation Association opted for the 1st of December, 2005 as the “National Transit Tribute to Rosa Parks Day.”

48. A certain scholar named Molefi Kete Asante regarded Rosa Parks as one of the Greatest African Americans ever.

49. Rosa Park’s heroics also involved the investigation of the gruesome raping of a young woman named Recy Taylor who was sexually assaulted by six white men.

50. One of her call to action words goes thus; “Knowing what must be done does away with fear”.

51. One of Park’s proudest moments was when the Supreme Court ruled in favor of ending the desegregation of public transport in 1956 following a nationwide boycott by the black community in Montgomery.

52. Sadly, Rosa Parks had to drop out of high school at the age of 16 in other to cater for her sick Grandmother.

Did you find these Rosa Park Facts interesting? Leave a comment below and share if you like the content. Do you know that when a person dies they have an estimated 7 minutes of brain activity left? Click to see more interesting psychological facts