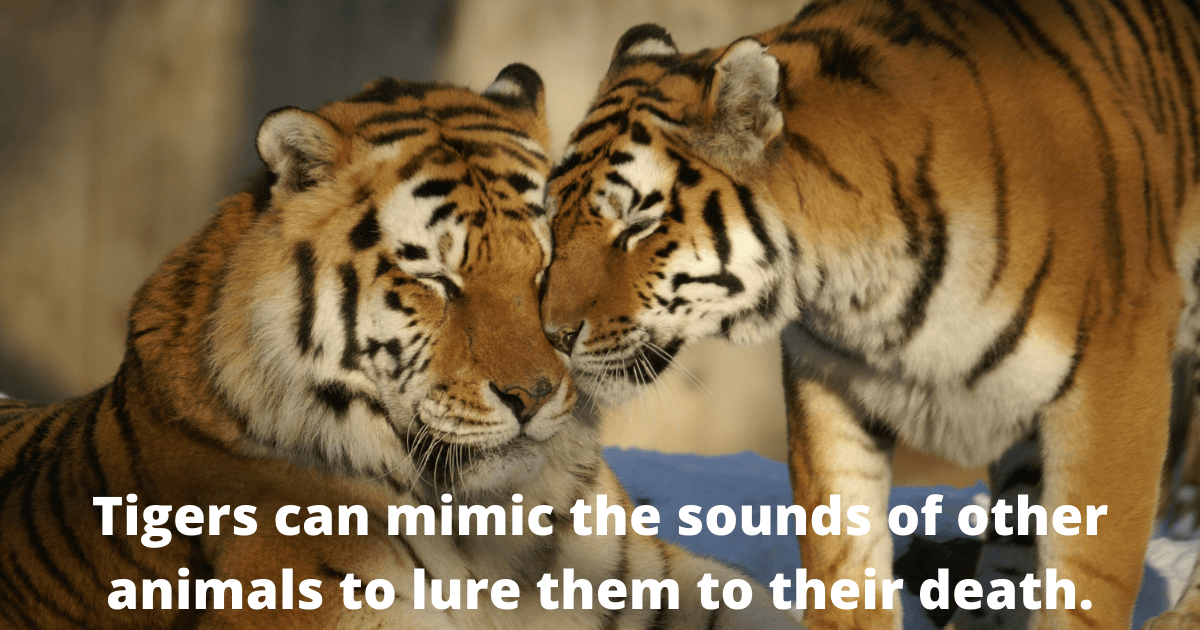 Certainly, you may know some things about animals, but there are some facts about animals that you will discover in this article that will drop your jaw. I personally was surprised when I discovered most of them while researching this article. So relax, and uncover surprising animal facts that you can share will family and friends.  Also, check out 81 Animal Trivia Questions and Answers.

1. The saliva of a tiger has antiseptic qualities and they make use of it to clean up their wounds to avoid infection.

2. Tigers can mimic the sounds of other animals to lure them to their death.

3. When a tiger urinates, the pee smells like popcorn that is buttered.

4. When a tiger dies, the hind legs are so powerful that they can still support the tiger to stand even after death.

5. The tongue of a lion is created in a special way; it is rough enough to peel away the flesh from the back of human skin.

6. A lion has a black spot that is at the base of its whisker that is just as unique as human fingerprints.

7. A pregnant lioness hides to give birth and hides the lion cub(s) for six weeks before bringing them to the pride.

8. When there is a scarcity of water, lions eat wild lemon to keep hydrated.

9. Since lions also derive fluids from their prey, they can go for 5 days without drinking water.

10. The heels of a lion do not touch or reach the ground while moving.

12. Leopards know how to climb a tree very well and they store what they kill on top of a tree.

13. When a leopard is roaring, it sounds like a chainsaw cutting through a tough tree trunk.

14. Leopards can live without drinking water for as long as 10 days.

15. Unlike all the other big cats, cheetahs are able to turn mid-air when they are chasing prey.

16. Cheetahs have what act like sunglasses that protect their eyes from the sun as they hunt.

17. Cheetahs can anticipate the escape tactics of different prey when hunting.

18. The shape spots that are on the jaguar’s skin are shaped like a rose.

19. The cubs of a jaguar are born blind and they are only able to see after two weeks after birth.

20. The tongue of a jaguar is rough enough to lick off flesh from its prey’s body.

21. Cougars hold a record in the Guinness Book of Records as the animal with the greatest number of names, with over 40 in English alone.

22. No animal species prey upon fully grown cougars in the wild except humans.

23. The animal that has the shortest lifespan is the Mayfly they live for about 24 hours.

24. Swifts fly a lot and can fly for an entire six months without landing.

25. Blue whales are very big and their tongues can weigh up to a car or approximately 2.7 tonnes.

26. Dying at the age of 188, the longest living verified animal is the radiated tortoise of Madagascar.

28. The male seahorse is the only male animal that naturally gives birth to their younger ones rather than the females.

29. The gray-headed albatross fly a lot and can circle the whole earth in about 46 days.

30. The legs of an ostrich are so strong that they can kill a lion with a kick.

32. The Great White Shark can detect a drop of blood from a far distance, about 5km away.

33. When food availability is low, the Edible Dormouse is able to hibernate for about 11 months.

34. Corvids, which include ravens, crows, and rooks, are extremely intelligent and can understand how gravity works.

35. The male yellow head fish stores all the eggs in his mouth for it to hatch.

36. The wood frogs are able to freeze themselves for seven months.

37. Glass frogs don’t have any coloration and this makes it possible to see their organs without opening their body.

38. The majority of the content of a parrotfish excrete is sand.

39. Axolotl is able to grow back any part of their body that gets damaged such as their limbs.

40. The California condor has the ability to soar for 3 miles without flapping its wings.

41. The saiga antelope has a bloated nose that is used to warm the air that enters their body during winter.

42. The giraffe, the tallest land animal, can make use of its tongue to clean its ear.

43. The heart of a blue whale can weigh as much as a car.

44. The only insect on earth that produces what human beings eat is the bees.

45. The reason why bees make a buzzing sound is that they stroke their wings 11,400 times every minute.

46. Unlike many animals, frogs have to close their eyes before they can eat.

47. The largest frog in the world is larger than a newborn baby and weighs 7 pounds.

48. Some frogs that live in the desert can hibernate for up to 7 years as they wait for rain.

49. Snakes sometimes steal the venom of a frog by feeding on them.

50. Because of a special locking system in their legs, horses can sleep while standing.

51. The teeth of a horse take up more space in their heads than their brains.

52. Horses salivate a lot and can produce approximately 10 gallons of saliva a day.

53. The heart of a horse is like the size of a basketball and typically weighs between 4kg and 4.5kg.

54. Squirrels are so cooperative that they will warn other squirrels if they see something suspicious or dangerous.