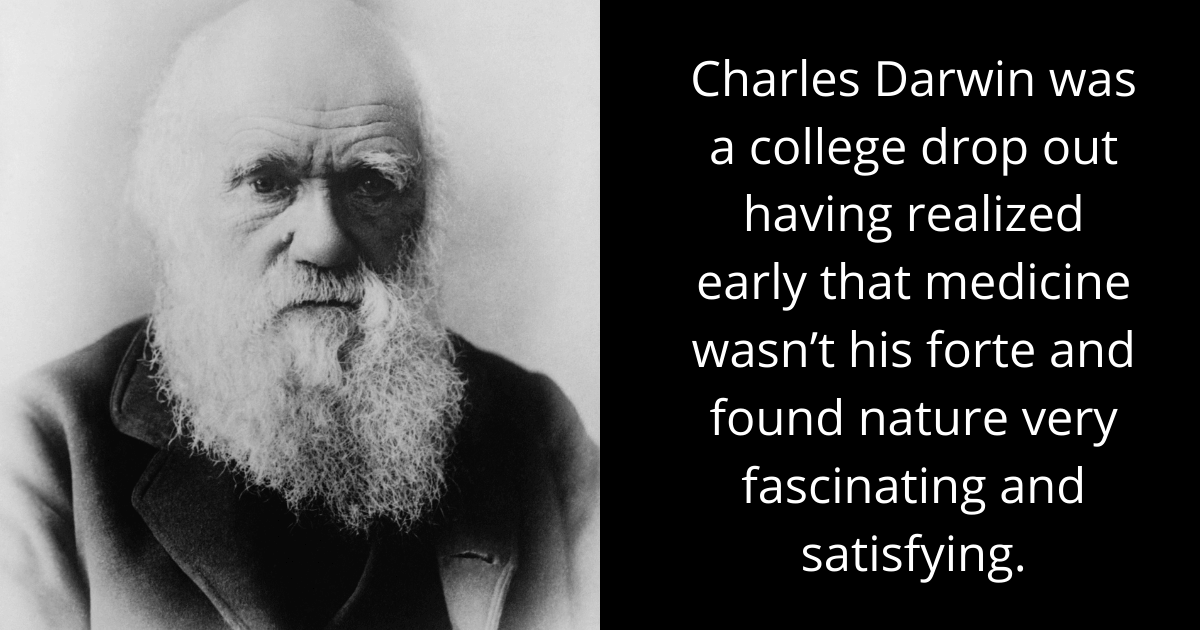 Arguably one of the greatest minds in the history of science and evolution, Charles Darwin is renowned for his book on the Origin of Species but how well do you know one of the most important figures in human history? Get ready to be blown away by some surprising and interesting facts about Charles Robert Darwin.

1. Interestingly, both Abraham Lincoln and Charles Darwin share the same birth date as both were given birth on the 12th of February, 1809.

2. Charles Darwin was a college drop out having realized early that medicine wasn’t his forte and found nature very fascinating and satisfying.

3. Darwin lost his mother at the age of eight years old of which he was brought up by his three elder sisters.

4. Charles’ father termed his son as a failure after failing to pursue his medical career and dropping out of college he said; “You care for nothing but shooting, dogs and rat-catching, and you will be a disgrace to yourself and all your family.”

5. He was a huge collector of Beetles.

6. Darwin was known for paying utmost attention to the details of the animals he collected such that he had a notebook to keep records.

7. Having been captivated by nature during his college days, his girlfriend broke up with him for paying less attention to her.

8. In his early twenties, Darwin was very fond of hiking.

9. For his great works, a mountain in Tierra del Fuego was named after him called “Mount Darwin” by Captain FitzRoy on his birthday in 1834.

10. Strangely, Darwin got married to his first cousin named Emma.

11. Darwin ate different animals but he termed the type of satisfaction he got from eating an owl as “Indescribable’.

12. The Galapagos Island was very key in Darwin’s research and collection of specimens as he was able to find plants and animals that weren’t found easily in other parts of the world.

13. Interestingly, over 250 species of insects are named after Darwin.

14. For his remarkable works in the world of science, the 12th of February has been named “Darwin’s Day” across the world to celebrate him.

16. Contrary to opinions, the phrase “Survival of the fittest” was coined from Herbert Spencer’s 1864 publication, not Charles Darwin’s thought on evolution.

18. Given his great work on the theory of evolution and natural selection, Charles Darwin was privileged to bury a few meters away from the famous scientist Sir Isaac Newton in Westminster Abbey.

19. Darwin’s portrait appeared on the British ten pounds note between the years 2000-2017 before it was replaced by author Jane Austen.

20. One of his famous quotes goes thus; “A man’s friendships are one of the best measures of his worth.”

21. Charles Darwin came from a wealthy family with his father already a medical doctor at the age of 19.

22. He suffered from a lot of health challenges during his lifetime having battled with heart disease at the latter stage of his life.

23. Interestingly, his work on the theory of evolution was published 50 years after his birth.

24. Although, his book divided opinions a lot having said men evolved from apes but he was awarded British science’s highest honor which is the Royal Society’s Copley Medal on 3 November 1864.

25. Having fallen ill from his voyage to South Africa, he became a huge fan of the Backgammon game and played it with his wife every night before going to bed.

26. Quite remarkable of Darwin to visit four continents within the space of five years(1831-1836) during his voyage expedition around the world.

27. It took him a staggering 40-hours of training sessions to learn Taxidermy from a freed slave called John Edmonstone.

28. Despite being a devout Christian in the early days of his life he later became agnostic having witnessed cruelty to mankind during his travels around the world.

29. Before getting married he infamously drew up a plan on the advantages and disadvantages of marriage.

30. It is believed that Darwin was Lactose Intolerant.

31. Darwin came from a family of free thinkers and was always open to new ideas or inventions.

32. Ironically, a school was named after him in Australia known as the Darwin University despite being a dropout.

33. Charles was known for eating exotic animals such as creatures like armadillo, puma, and ostrich.

34. Darwin was the fifth child of his parents whose names were Robert and Susannah Darwin.

35. Darwin’s wife Emma Wedgewood gave birth to 10 children but unfortunately, three died from illnesses while the rest battled with different types of ailments till they passed away.

36. Adolf Hitler was a firm believer in Charles Darwin’s work on the theory of evolution and natural selection.

37. The great adventurer wrote about 204 books during his lifetime.

38. It is believed that Darwin wasn’t fully convinced about his evolution theory has stated that “if all life on earth doesn’t come from one ancestor then his theory is wrong”.

39. Darwin’s concept on the theory of evolution dates back to the classical Greek philosophers.

40. Majority of his critics accused him of procrastination and vacillation(indecisiveness).

41. Darwin’s mother was the daughter of a famous potter known as Josiah Wedgwood.

42. He attended John Stevens Henslow’s course in Botany who he often regarded as his mentor.

43. It would intrigue you to know that Darwin almost missed the ship that took him to Galapagos Islands.

44. He had a phobia for blood maybe this explains why he didn’t cut it as a medical doctor.

45. His health challenges were never diagnosed despite meeting with top medical professionals.

46. Despite being known for his famous work on the Origin of Species, some of his other works include: ‘The Expression of Emotions in Man and Animals, ‘The Descent of Man, and Selection in Relation to Sex’.

47. His ideas birthed an artificial ecosystem at Ascension Island in 1847.

48. Some particular school of thought suggests that Darwin’s health challenges could be a blessing in disguise for him as he was able to focus on his work without any form of distraction.

49. During his Beagle Voyage expedition, it was believed that Darwin spent a total of 535 days on Sea and about 1200 days on land.

50. Charles was credited with discovering the distinct species of Ostrich.

51. He once studied Divinity at the University of Cambridge at the age of 18.

52. He is often called a ‘gentleman naturalist’ by his mentor John Stevens Henslow’s had recommended him for an expedition on the HMS Beagle voyage.

53. Darwin was captivated by finches, giant tortoises, and mockingbirds during his travels around the globe.

54. The idea of Natural Selection was birthed upon his return from his expedition to the Golapagos Island.

55. Darwin wasn’t a huge fan of inter cousin-marriage after his children suffered from different illnesses during their lifetime.

56. It is believed that Darwin doesn’t entertain distractions having killed his daughter’s cat while trying to focus on his work.

57. Surprisingly, Charles had some serious doubts about publishing his theory on evolution because he wasn’t too sure about how people will accept his theory.

58. Charles Darwin’s last word goes thus: “I am not the least afraid of death—remember what a good wife you have been to me—tell all my children to remember how good they have been to me”.

59. Although, it took a total of 126 years before the church of England rescinded their criticism of Darwin’s work on the origin of Species.