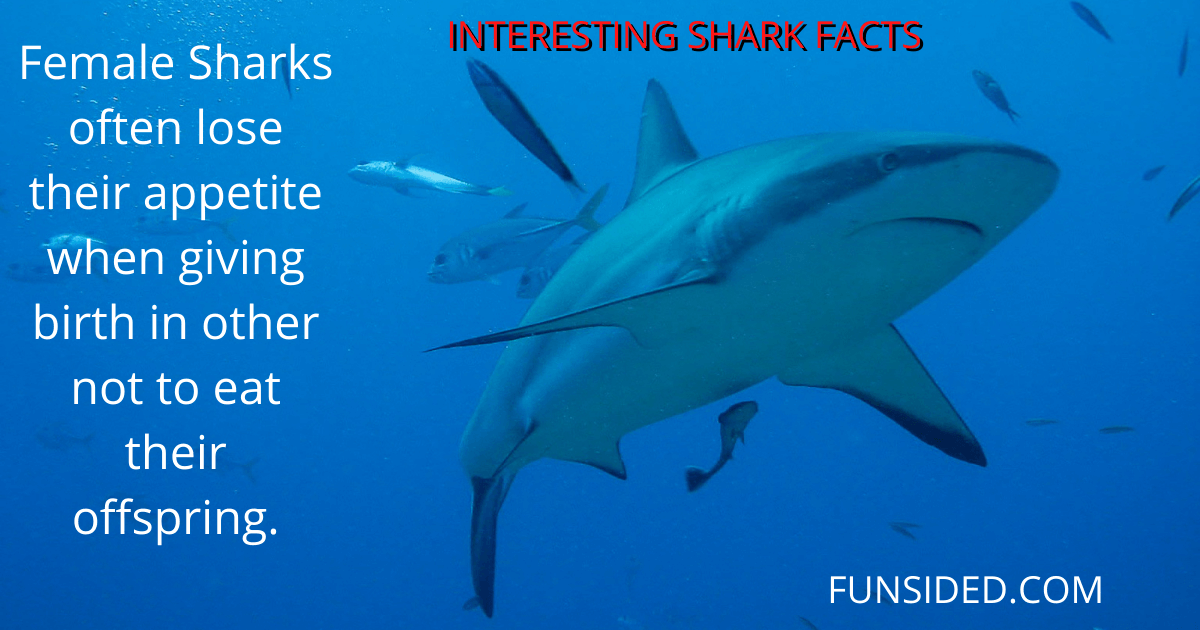 Often called the King of the ocean, Sharks are captivating in nature and yet mysterious. In the article below, we will be exploring some unknown and mind-blowing facts about one of the deadliest water animals in the world.

1. Sounds weird but Female Sharks often lose their appetite when giving birth in other not to eat their offspring.

2. Sharks have a unique hearing aid as they can hear prey about 3000 feet away.

3. While some animals can’t survive in a specific region, the reverse is the case for sharks as they can be found in every ocean on the planet.

4. Just like trees, the ring vertebrae of a Shark can predict the age of the cold-blooded animal.

5. Sharks are built differently as it is believed that the male sharks bite the females on the head during mating.

6. The largest species of Sharks to have existed are called the Megadolon. Though they have been extinct for about 16 million years and are about 50 feet in size.

7. Sharks are one of the deadliest hunters in the oceans because they can move both their upper and lower jaw as fast as possible.

8. It is believed that Sharks have been in existence for about 450 million years ago.

10. Unlike humans, Sharks have their eyes besides their heads of which gives them a better viewing experience underwater.

11. Sharks are believed to be color blind and tend to see better during the dark.

12. Sharks hardly sleep because they have to keep pumping water via their mouth and gills in other to breathe.

13. Sharks have one of the thickest skins in the animal kingdom with some having up to 6inches in terms of thickness.

14. Of all the fishes in the world, Sharks have the largest brain.

15. Sharks’ ways of communication vary greatly as they can either swim in a zigzag position, headbutts, or shaking of their heads.

16. It might sound a bit strange but larger sharks tend to live longer than the smaller ones.

17. Although, humans are the Shark’s biggest predator, but crocodiles & killer whales aren’t that far behind.

18. Sharks reproduce asexually by what is called “Parthenogenesis”.

19. The Hammerheads are the youngest species of Sharks.

20. Interestingly, Sharks can only swim forward due to their stiff fins controlled by their muscular system.

21. The species of the Tiger Shark is usually different from the rest as they start to battle for survival right from the womb because they are already carnivorous from birth.

22. Sounds strange but the Frilled Sharks pregnancy usually lasts about three and a half years.

23. Bull Sharks are quite adaptive in nature as they can live conveniently both on Fresh and Saltwater.

24. The Laziest type of Sharks are called the Nurse Sharks. They eat less compared to a normal Shark and barely migrate to other regions.

25. Majority of Sharks hunt alone except the Hammerheads Sharks that do hunt in packs.

26. While the Great White Sharks can eat up to 11 tons of food per year, they can also surprisingly do without food for up to 90 days.

27. Interestingly, the ratio of sharks killing humans is at the rate of 4 casualties per year while humans killing Sharks is about 100 million per year.

28. The Great White Sharks can unbelievably jump up to ten feet out of the water to catch prey.

29. The lantern Sharks use what is called the “Bioluminescence” to attract mates and mislead their prey.

30. It takes just one-tenth of a second for Angel Sharks to ambush their prey.

31. Funny but true, the Thresher Whale make use of their tails to slap their prey to death.

32. Unlike other Sharks, the Bamboo Species can’t swim but use their four fins to aid their movement.

33. The Blue Sharks are the most vulnerable species of the Shark Family because humans use them in making Shark Fin Soup.

34. Given the structure of their heads, the Hammerheads Sharks have a binocular vision of about 360 degrees.

35. Moving at a speed of 1.3 kilometers per hour, the Greenland Sharks are the slowest moving fish ever recorded.

36. Quite strange but given how intelligent Sharks are, Research shows that some species of Sharks go back to their place of birth to reproduce in what is known as “Natal Philopatry”.

37. Sharks often go into trance when flipped upside down.

38. The Whale Sharks are the biggest in the ocean and could weigh up to 40 tons and 12.2 meters in length.

39. Female Sharks are often larger than male ones because of the need to carry baby sharks.

40. It is believed that over 500 species of Sharks exist.

41. Not all Sharks live in the ocean as some have shown to be more comfortable living in Freshwater lakes and Rivers.

42. The bite of the Great White Shark is believed to be four times stronger than a Lion or Tiger.

43. Female Sharks are quite polygamous in nature with research suggesting that they can be impregnated by multiple male sperms at once.

44. Majority of Shark attacks on humans have been more of males than females.

45. Tiger Sharks are quite mysterious in nature as it has been proven that they can eat anything they find in the ocean such as video cameras, dog leashes, bags of money, etc.

47. One of the major reasons why Sharks are very fast and light is due to the presence of pure cartilage and muscles in their bodies.

49. The epicenter for Sharks’ teeth is the ocean floor.

50. Unlike other Sharks, the Dwarf Lantern is very small in nature and only grows to about just 6 inches in length.

51. Contrary to opinions, a Shark can only smell a drop of blood in an Olympic-sized pool, not an Ocean.

53. The Greenland Sharks skins are well equipped with coping with extreme temperatures in the Arctic.

54. Sounds weird but the Bala Sharks give birth to fully grown offspring.

55. Just like humans fingerprints are unique, the Whale Sharks spot patterns can never be the same.

56. Sharks at the surface of the ocean have a dark-colored eye in other to limit the rays of light that enter their eyes while the reverse is the case for those beneath the ocean.

57. Unlike humans, Sharks cavities are coated with a protective clouride which doesn’t make their teeth decay.

58. According to scientists, about 30% of Sharks are close to extinction.

60. Just like humans, sharks can detect electricity due to the electroreceptor organs in their bodies called the “Ampullae of Lorenzini,”.