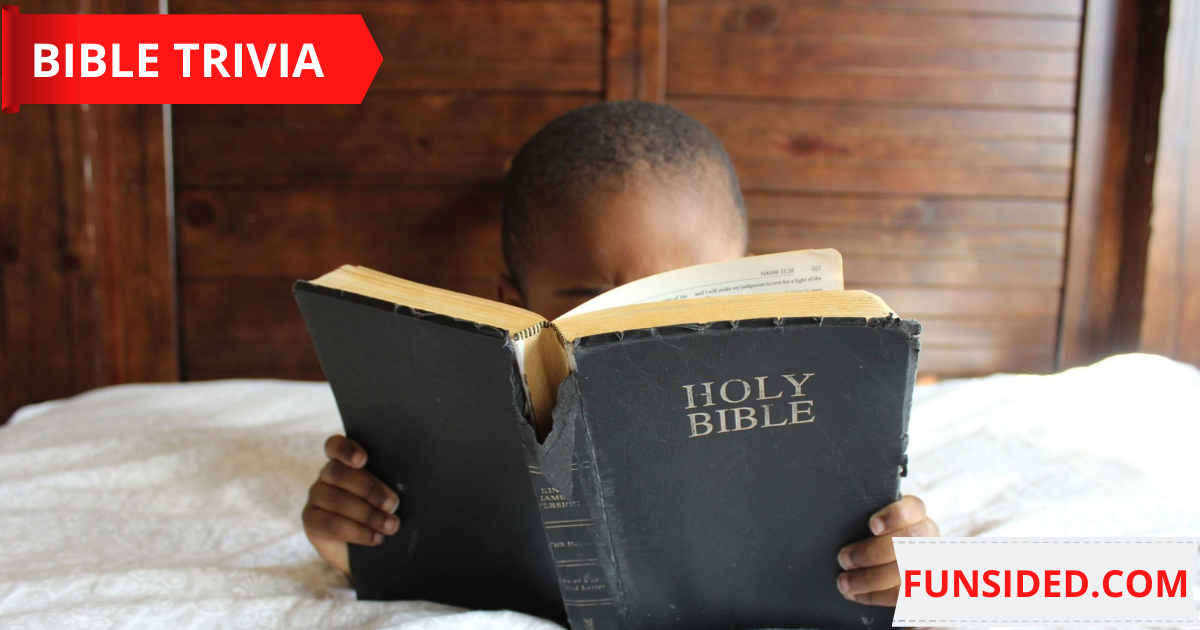 
Do you think you know the bible? Then take on these interesting trivia bible questions to light up your day and grow spiritually? When you are done answering, scroll to the end of the questions to see the answers.

1 What is the first book in the Bible?

2 What is the last book in the Bible?

3 What is the last book of the Old Testament?

4 How many days did God take to create the world?

5 Who was the first man God created?

6 Where did Adam and Eve live at the beginning of the world?

7 Who did God tell to build an ark?

8 How many days and nights did it rain when Noah was on the ark?

9 What four books of the bible tell about Jesus’ life on Earth?

10 What is the longest book of the Bible?

11 What musical instrument did David play?

12 How many days and nights did Jesus fast?

13 What was God’s sign to Noah that he would never destroy the earth again?

14 How many brothers did Joseph have?

15 What is the shortest book in the Bible?

16 How many books are there in the Old Testament?

17 Which human author wrote the most words in the Bible?

18 Which New Testament book has Jesus’ Sermon on the Mount?

19 How many times was the word “snow” mentioned in Bible?

20 What did King Solomon ask God to give him?

21 What day did God create man?

22 How many people were saved on the ark?

24 Who was the first son Abram had?

25 What was Abram’s name changed to?

26 What was Sarai’s name changed to?

27 What piece of clothing made Joseph’s brothers jealous?

28 How many days was Jonah in the belly of the big fish?

29 How was Ruth related to Naomi?

30 How did Moses’ mother save him from the Egyptian soldiers?

31 Through what did God speak to Moses in the desert?

32 How many plagues did God send on Egypt?

33 What was the second son Abraham had?

34 What are the names of Isaac’s two sons?

35 How did Esau provide food for the family?

36 What birds did Noah send out from the ark?

37 What percentage of Zacchaeus wealth did he give to the poor?

38 In the book of Luke, the woman cleans Jesus’ feet with what two things?

40 Where did God give Moses the Ten Commandments?

41 Who was the first king of Israel?

42 What did Esau receive in exchange for his birthright?

43 Which daughter of Laban did Jacob want to marry?

44 Who did Laban trick Jacob into marrying?

45 What were the names of the twins who wrestled in their mother’s womb?

46 Where did Jesus grow up after returning from Egypt?

47 Where was Daniel thrown into?

48 Who was Jesus’ human mother?

49 What city was Jesus was born?

51 How did Joseph’s brothers get rid of him?

52 Where did the slave traders take Joseph?

53 What were the two plagues that afflicted the Egyptians physically?

54 What type of insect did John the Baptist eat in the desert?

55 Who were the first apostles called to follow Jesus?

56 How many people did Jesus feed with five loaves of bread and two fish?

57 Who got Joseph thrown into prison by lying about him?

58 What is the name of the place where Jesus walked on water?

59 What is the shortest verse in the Bible?

60 Name the disciple who betrayed Jesus?

Answer to the Trivia Questions Above