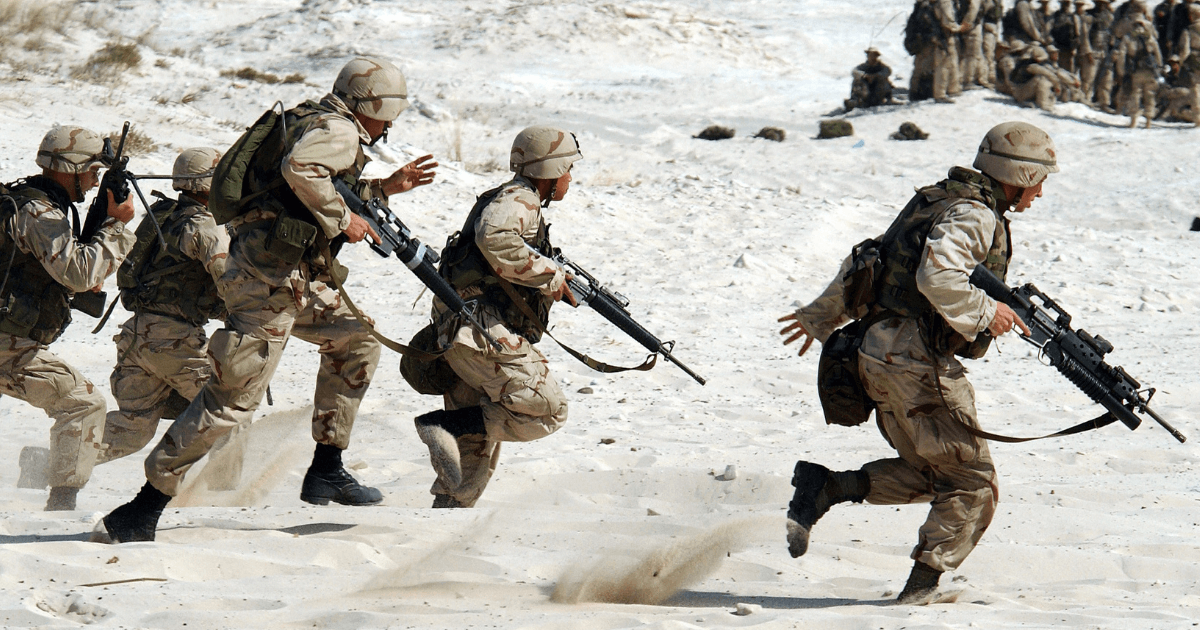 The Military of any nation often symbolizes or stands as the defense of the state and protection against external armed forces. in this article, we will be exploring some unknown and mind-blowing military facts of different countries of the world. grab your popcorn because we are about to take you on a fun journey.

1.  Astonishingly, Marines on their uniforms are not allowed to put their hands in their pockets.

2. Astonishingly, 30 out of 45 US Presidents served in the military, 24 during the War, two who earned the rank of a 5-star general namely Washington and Eisenhower, while the latter earned the medal of honor (T. Roosevelt).

3. On average, 28% of Americans between the age bracket of 17-23 are believed to be qualified for military service.

4. The department of state is believed to be the largest employer in the U.S with over 1.8 million people on active duty.

5. Prior to 1946, the US Air Force was part of The Army and was formerly called the Army Air Corps.

6. Interestingly, the defense department owns a mammoth 29,819,492 acres of land across the world.

8. Surprisingly, only Female Marines are granted the liberty to carry umbrellas in their uniform.

9. The United States has a jaw-dropping 737 military installations overseas.

10. The United States Military is fascinatingly made up of five service armed branches; the Air Force, Army, Coast Guard, Marine Corps, and the Navy.

11. On Average, the US Army uses almost a billion gallons of fuel per year.

12. Every 11th of November is a special day in the US military often known as Veteran’s Day. It’s a day set aside to honor America’s Veterans for their services to the country.

13. Interestingly, the US military nuclear warhead has been reduced drastically to 84% since the cold war but the strongest country in the world currently possesses an incredible 2,150 nuclear warheads and many more in their reserve storage.

14. The advancement in technology has birthed the use of Drones by the military of which are remotely controlled aircraft that carry high-grade cameras, bombs, or missiles.

15. The bloodiest war in the history of the US military is the Civil War with a whooping 618,000 soldiers losing their lives.

16. Prior to the 1898 Spanish-American War, the US military usually wear Blue before their recent use of Khakis. The use of Camouflage colored uniforms started during World War II.

17. Popular Civilian vehicles known as Jeeps were originally produced for carrying men and supplies to battlefronts during World War II and were also used in conveying wounded men to safety.

18. Astonishingly, the US has declared war on five notable occasions such as; the War of 1812, the Mexican-American War, the Spanish-American War, World War 1, and World War II.

19. Interestingly, the US military had deployed a staggering 2,700 Military Working Dogs (MWDs) worldwide to 600 war zones.

20. On average, about 50% of homeless veterans suffer from disabilities, and two-thirds have substance abuse problems.

21. Due to Post Traumatic Stress Disorder (PTSD), psychological issues or depression suffered from wars, a high percentage of 1 in 3 US soldiers experience higher rates of divorce, suicide, unemployment, and homelessness than other civilians.

22. Because of the All-Volunteer Force from a Conscription force in 1973, the number of Americans enlisted in the military has decreased massively to an unbelievable 0.5% compared to the 9% and 2% enlisted during World War II and Vietnam War respectively.

23. Despite the United States Military is an All-Volunteer Force, Male Citizens and male immigrants between the age of 18-25 are to register with the Selective Service in case if an emergency draft was required. Failure to register could surprisingly attract a fine of over $250,000 or imprisonment of up to five years.

24. Following the rescinding of all exclusion policies for Women in the US military by the Secretary of defense in 2013, women now constitute about 14.5% of the US military.

25. Serving in the US military for over 20 years or more simply means the personnel is to receive a mouthwatering pension of 50% of their base pay during the time of their service.

26. During the year 2014, the department of defense estimated a mind-blowing increase in Unwanted Sexual Contact experience of 4.3% to 4.9% of women and 0.9% to 1% in men in the US Military.

27. Amazingly, Over half of the personnel deployed to Iraq and Afghanistan by the United States since 2003 has been contractors made up of private military and security companies (PMSCs), and the US Military has spent a whopping $177 billion or more in contracts and grants for PMSCs since 2001.

28. Research suggests that wartime casualties have reduced drastically due to the improvement in medical supplies, better first aid training kits for all personnel, and also improved gears.

29. The number one killer of US military troops in Afghanistan is the Improvised Explosive devices popularly known as IEDs.

31. Surprisingly, M&M’s were originally made to allow easy transportation of chocolates to the military.

33. Due to his unwavering commitment to honoring War Heroes through his efforts as a national spokesman for World War II, Tom Hanks became the first actor in history never to serve in the military to be inducted as an honorary member into the US Army military rangers hall of fame.

35. The British Army amazingly developed a tank-mounted kettle for making tea having lost a World War II battle because the crew had abandoned their post for a tea break.

36. Sound crazy but in 1943, a pigeon named G.I JOE was single-handedly responsible for saving the lives of an entire village and the infantry division occupying it.

37. Armored knights raised their visors to identify themselves when they rode past their king. This custom is now officially recognized as the Military Salute.

38. Ancient Egyptians once lost a battle shockingly because their enemies used cats against them. The Egyptians believe cats are sacred creatures and couldn’t hurt them.

39. Dogs in the military are astonishingly always higher ranked than their handlers to prevent them from being mistreated.

40. Interestingly in 1946, Harry Truman created the National School Lunch Program after reading a study that showed many young men were rejected from the World War II draft due to medical conditions caused by malnutrition from childhood.

41. It would interest you to know that North Korea has mandatory military service for everyone in the country which means the men serve for 10 years while the women serve for 7 years. Although, Citizens who are able to get a bachelor’s degree serve in the military for just five years.

42. In terms of the population of any nation, North Korea has the largest number of active soldiers in the world with a staggering 1,109,000 million active soldiers and 6,300,000 in reserve.

43. Shockingly, 2 out of 5 North Korean soldiers are believed to be undernourished according to the United Nations figures.

44. Wearing military uniforms is a source of pride and respect for any soldier in the world but in North Korea, it’s believed to be a source of pain as former soldiers complain about the boots they wear of which aren’t sturdy enough to prevent them from frostbites and start to fall apart quickly.

45. During their compulsory seven-year of military service, the various report suggests that women in the North Korean military service are shockingly subjected to sexual violence or humiliation.

46. Surprisingly, South American country Brazil has over 334,000 active soldiers in their military with an estimated 1.3 million in reserve due to their 10-12 months of compulsory military service for citizens between age 18-45.

47. In Egypt, all men between the ages of 18-49 are to undergo compulsory three-year military service. Active military personnel is believed to be around 468,000 and a stupendous 500,000 in reserve.

48. It is believed that France has over 300 warheads with an amazing 280 in usable condition.

49. South Korea has one of the largest military forces in the world with over 600,000 active military personnel and a jaw-dropping 3,000,000 in reserve.

50. Interestingly, South Korea spends a whopping 2.7% of its GDP on its military.

51. Russia is believed to have one of the most powerful military forces in the world with over 6,000 nuclear weapons. Although, only 4,500 are usable.

53. The department of defense in the United States has astonishingly been in existence since 1789.

54. One-third of the US military are amazingly made up of immigrants.

55. The first set of submarines to be used were brilliantly used by the army in the revolutionary war.

56. Interestingly, the famous Ray-Ban Glasses often used as a fashion nowadays was officially created as a result of the U.S. Army Air Corps Lieutenant General John Mac Cready asking Bausch & Lomb to make glasses for his pilots that would block the rays of the sun and reduce their nausea and headaches.

57. As shocking as it may sound, only five men were given the rank of a five-star general in the history of the US army. Although, the ranks were retired in 1981 following the death of Omar Bradley which was the last surviving five-star general.

Hope you found these military facts interesting. Tell us in the comment section below.