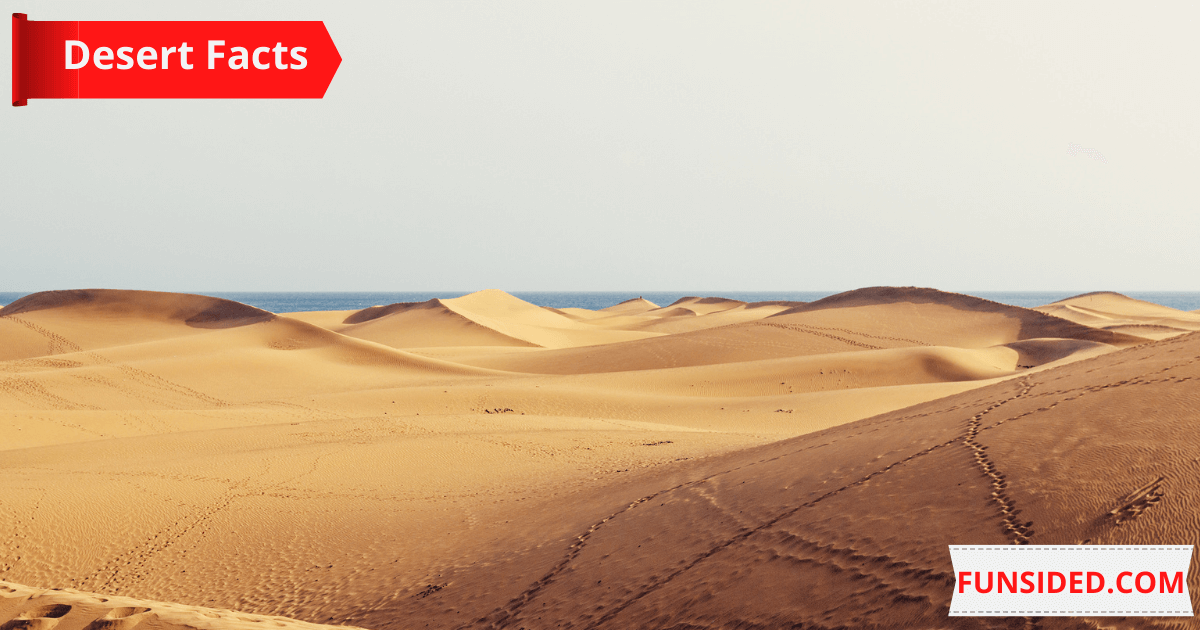 Do you know that during summer in the Arctic desert, the sun doesn’t set for a mind-boggling 8 weeks? Deserts are often described as an area of land that usually receives less than 10 inches of rainfall per year. However, there is so much more to a desert than the definition above and in this article, we will be sharing some interesting but true deserts facts.

1. An estimated one-third of the earth’s surface is covered up in the desert.

2. Spanning across 12 northern countries with an average area of 9.4 square kilometers, the Largest Hot desert in the world is the Sahara Desert.

3. Meanwhile, the smallest desert in the world is the Carcross Desert with an average of 1 square mile in size. It is located in Yukon, Canada.

4. Having been in desertification for over 40 million years, the driest desert in the world is the Atacama Desert in Chile.

5. Despite being known as one of the driest places on earth with little or no rainfall, Antarctica shockingly contains about 90% of the earth’s fresh water.

6. Research suggests that over the last 30 years, the Sahara desert is shrinking and it’s becoming greener due to climate change.

7. The youngest and the most toxic desert in the world is the Aralkum desert due to the huge deposits of pesticides, fertilizers, chemicals, and runoff from farms.

8. One of the most resilient animals in the desert is the Tortoise. They are usually found in the Mojave desert and can live up to one year without water.

9. The Gobi desert is the most rapidly growing desert in the world over 1,300 square miles. It is also famous for the discovery of the first dinosaur eggs in 1923.

10. The Namib desert is often considered the oldest desert in the world dating back to over 55 and 80 million years old.

12. The fastest rate of desertification is highly prominent in China with almost 1000 square miles of Chinese lands turning into deserts annually.

13. The “Bi” roots are often used in the Kalahari desert in Namibia by Bushmen to stay hydrated in extreme conditions or temperatures.

14. Often considered as the most venomous snake in the world, the inland Taipan found in the Australian desert possess a deadly venom that’s enough to kill up to eighty men with just a single bite.

15. Despite the talks of Ostrich been calm and gentle, they are surprisingly one of the most dangerous desert birds. Given their 30cm long claws which are thick and strong, a powerful kick from an ostrich can kill a human.

16. It may sound strange but during the summer in the Arctic desert, the sun doesn’t set for a mind-boggling 8 weeks.

17. The most venomous species of scorpion is called the Death Stalker. It usually operates in the night and its sting and venom are enough to kill a child or an Adult.

18. The Australian redback spider is the deadliest desert spider. With an average of 10,000 bites annually, its bite can cause nausea, vomiting, and swelling to the body.

19. The highest desert in the world is known as the Antarctic desert.

20. Sounds unbelievable but on the 18th of February, 1979, it snowed in the Sahara desert for about half an hour.

21. Deserts are often hot during the day and very cold at night.

23. Nocturnal animals such as Rattlesnakes, Coyotes, and lizards are the major inhabitants of the desert because they usually operate better at night due to the reduction in temperature.

24. The five largest deserts in the world are Antarctica, Arctic, Sahara, Australian and Arabic deserts.

25. In ancient times in Africa, the sub-Saharan routes played a major role in the growth of many economies with camels being used for transportation of Gold, copper, and salt.

26. Almost all the plants and animals in the deserts have an adaptation technique that helps them survive despite the hard weather condition over time.

27. The soil in cold deserts such as the Antarctica desert is not good for planting because it’s silky, salty, and heavy.

28. In Antarctica, the entire continent is a desert with temperatures ranging from -67°F in the winter and -59°F in the summer.

29. The Arctic Desert partially consists of countries such as Canada, Norway, Sweden, Russia, and the US.

30. The three most famous deserts in the US are the Sonoran desert, the Great Basin Desert, and the Colorado Plateau desert.

31. The Sonoran desert is about 100,000 square miles and it’s surprisingly home to cities like Phoenix Arizona and temperatures could at times rise up to 118° degrees.

32. The Saguaro cactuses are usually found in the Sonoran desert and can shockingly live up to 200 years old.

34. The Colorado Plateau covers about 130,000 square miles and it’s the only place where four states connect in the US. The countries are Colorado, Utah, New Mexico, and Arizona.

35. Unlike humans, the sun generates more energy in the desert in just six hours than the ones humans consume in a year.

36. It would interest you to know that the desert is home to a lot of diverse creatures/ecosystems. A figure only bettered by the rain forest.

37. The Gila monster is one of the most venomous lizards in the world and it’s usually found in the Sonoran desert.

38. The Dorcas Gazelle neither have to drink water or pee but they normally get their water from the food they eat.

39. The sidewinding method of movement is only used by two species of snake in the world which are the Mojave sidewinder and Namib desert Viper in Africa. As the name conote, they undulate their bodies in an attempt to move sideways.

40. Care to know how the camel survives in the desert? They store fats in their hump and can be used as a source of food during the dry seasons.

41. The fairy circles in the desert remain a mystery to experts and scientists with each circle between 7-65 feet in diameter. They can unbelievably live up to 75 years.

42. About 8,000 years ago, it is believed that the Sahara desert was covered in rich fertile vegetation.

44. The Sahara desert is as big as China or the US in terms of area having covered an estimated figure of 9.4 million square meters.

45. Just like the earth, the desert can also be found on Planet Mars.

46. Camels are often used by the nomads.

47. Dust storms in the deserts travel at a speed of beyond 100 miles.

48. Europe is believed to be the only continent in the world that doesn’t have as Biome such as Yardangs and the Rock pedestals.

50. The highest recorded temperature in the Sahara desert was 136°F in which happened on the 22nd of September, 1922.

52. The highest point in the Sahara desert is called the Emi Koussi at 3,415 meters.

53. The Sahara desert has been used frequently for the location of movies.

54. The tallest sand dunes in the world can be found in the Namib deserts with an average of 300 meters.

55. The African Wild dog is the most deadly predator in the desert.

56. The most intense foot race in the world occurs in the Sahara desert. It usually spans 6 days and involves a 156-kilometer trek.

57. Unlike other deserts whose sand isn’t good for planting, the Kalahari desert suggests otherwise.

58. Most of the world’s largest mines in the world can be found in the Kalahari desert.

59. The Kalahari desert is the sixth biggest desert in the world in terms of area and second-best in the world behind the Sahara desert.

60. It would intrigue you to know that the Kalahari desert came into existence as far back as 60,000 years ago.

Do you find these deserts facts interesting? Leave a comment below and share if you like the content. Do you know that octopuses have three hearts and their blood is blue in color?  Click here to discover more ocean facts that will wow you.