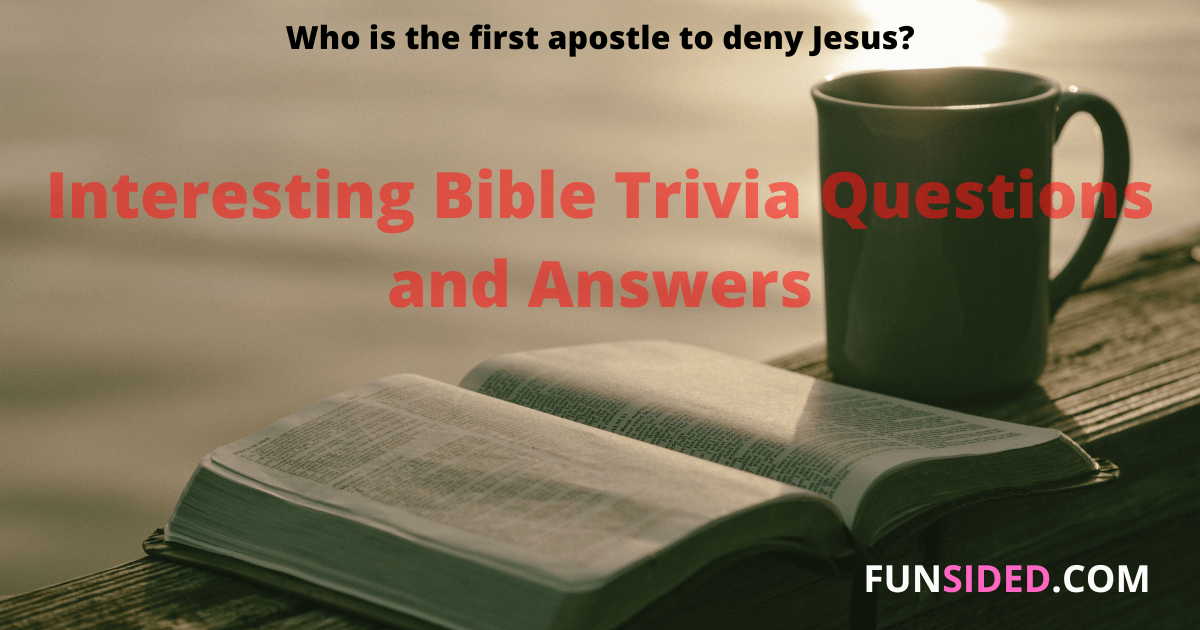 Do you think you know the bible? Then take on these interesting trivia bible questions to light up your day and grow spiritually.

1.  Name one person that did not experience death in the bible.

3. Where was Jesus tempted by Satan?

4. Which heavenly bodies did Joshua command to stay still?

Answer: The sun and moon

5. Which island was Paul was shipwrecked?

6. How many lepers did Jesus heal on the border between Galilee and Samaria?

7. Who refused to be called the son of Pharaoh’s daughter by faith?

8. Which apostle disowned Jesus three times after he was arrested?

9. Which tribe was Paul from?

10. Which angel came to tell Virgin Mary about her pregnancy?

11. The name of David’s son that became king is?

12. Who was the prophet God instructed to marry a harlot?

13. Simeon recognized Jesus as who when he was presented at the Temple as a baby?

14. Emperor Cyrus the Great let the Israelites return to their homeland from where?

15. Jesus was put on trial by a high priest of Jerusalem called?

16. Who did Abraham send to find Isaac a wife?

17. What was Moses’ age when his mother set him adrift on the Nile?

18. Who was traveling to Damascus and encountered a great and blinding light?

19. Daniel was thrown into a lion’s den as punishment for what?

20. Joseph of Arimathea asked Pilate for what?

21. Which Isaac’s sons provided food for the family by hunting?

22. Moses cast what into the fountain at Marah so that the water would not be bitter?

Answer: a piece of wood

23. Which Chapter of Ephesians did Paul say Christians should follow Christ’s example?

25. Matthew worked as what before preaching the word of God?

26. What did Esau receive in exchange for his birthright?

28. According to the Beatitudes, those who hunger and thirst for righteousness will be _______?

29. Which queen was thrown from a high window, and her body devoured dogs in the bible?

31. Which Laban daughter did Jacob want to marry?

32. Moses’ father-in-law, Jethro, was a priest in what land?

33. what was Paul of Tarsus’s name before he begins his missionary activity?

34. Which well did Abraham and Abimelech fight over?

35. Which apostle doubted Jesus’ resurrection until he saw Jesus with his own eyes?

36. Who did Laban trick Jacob into marrying?

37. Which plague upon Egypt fell from the sky?

38. Jesus’s public sermon on the mount was his first, True or False?

40. Which Gospel is written by a doctor?

41. Joseph was the first son Jacob had with who?

42. What tree did Nahum says Nineveh’s strongholds are like?

43. Which king murdered John the Baptist?

45. Where did Jesus Christ turn water into wine?

47. Who returned to rebuild Jerusalem under Persian King Artaxerxes?

48. Who is the first apostle to deny Jesus?

49. Who requested for the head of John the Baptist?

50. What did Moses turn into a bronze snake?

51. How did Moses’ mother save him from the Egyptian soldiers?

Answer: Put him in a basket in the river.

52. Why did Absalom flee from Israel to Geshur?

Answer: He killed the Amnon

53. Who gave Jesus gifts when he was born?

54. Who was killed first between Jesus and John the Baptist?

Answer: As a mourner

58. Which tribe of Israel looked after the religious aspects of life?

59. Who warned Paul about the plot to kill him?

60. How many plagues are in Exodus?