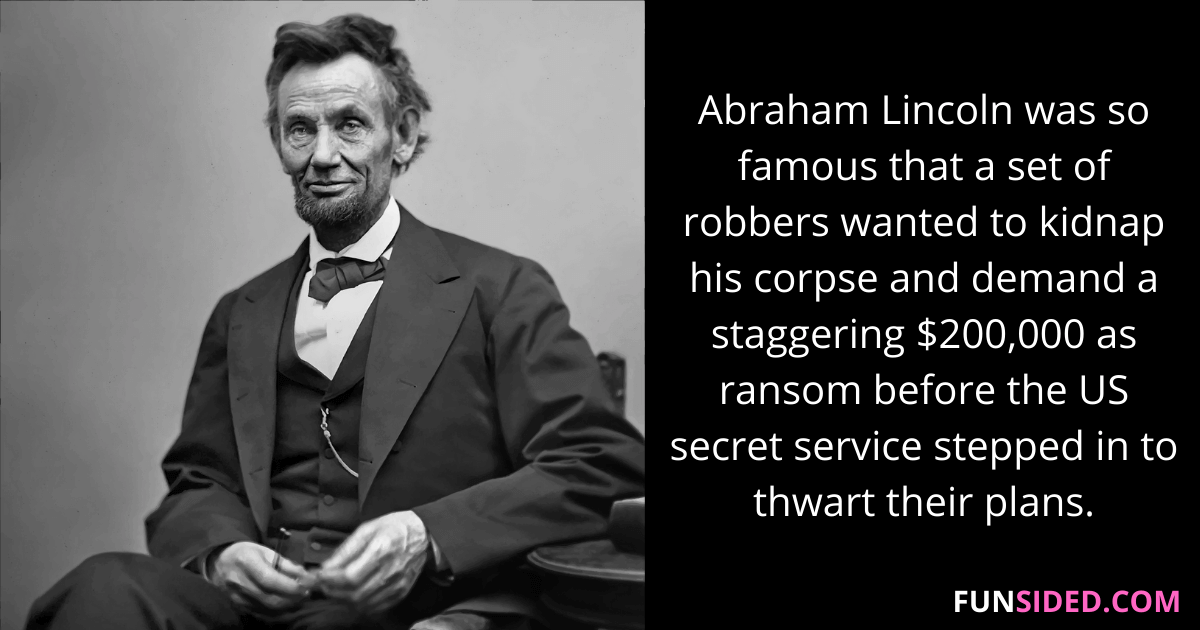 3. Although he knows much about the Bible, Lincoln was never a member of any recognized church.

4. Lincoln wasn’t just a wrestler but an accomplished one and lost just one fight out of the 300 games he competed in. He was so good he was inducted into the Wrestling National Hall of Fame.

5. Prior to being elected, Lincoln was a postmaster, general store owner, and Lawyer.

6. Despite forming the US Secret Service, Abraham Lincoln was unfortunately assassinated the same day the secret service bill was signed.

7. Abraham Lincoln was so famous that a set of robbers wanted to kidnap his corpse and demand a staggering $200,000 as ransom before the US secret service stepped in to thwart their plans.

8. Lincoln remains the only United States President to be awarded a patent for inventing a model to keep ships afloat on shallow water while near the shore. In 1849, he was credited with Patent No. 6,469.

9. Due to his love for testing rifles often used by the US forces, he once violated the law by testing a rifle outside the White House.

10. Popular holiday known as Thanksgiving was established by Abraham Lincoln having set every last Thursday in November as a day to celebrate Thanksgiving.

12. Abraham Lincoln holds the record for the longest feet size of any US President in history. His shoe size ranged from 12-14.

13. Surprisingly, it is believed that Abraham Lincoln used his white house bedroom as an office rather than sleeping in it.

14. It might sound a bit strange but Abraham Lincoln usually keeps his important documents in his hat.

16. Abraham Lincoln didn’t only fight against Slavery but was also the pioneer for women’s right to vote.

17. Abraham’s love for cats was unrivaled such that he had lots of cats in the White House and always had two cats he fed on the dinner table.

18. Lincoln was known for his never-giving-up attitude as he contested and lost five different elections before finally becoming the President of the United States.

19. Interestingly, over 15,000 books are written about Abraham Lincoln.

20. Unfortunately, Abraham Lincoln was the first US President to be assassinated.

22. Sounds funny but Abraham Lincoln is the only President known to have sported a Beard while serving in office.

23. Consider it a mere coincidence? Both Charles Darwin and Abraham Lincoln were born on the same day.

24. Unfortunately, Abraham Lincoln was shot on Good Friday by an actor named John Wilkes Booth and he was a great fan of his play-acting skills.

25. Lincoln astonishingly had a dream about his assassination 10 days before it happened.

26. Many suggest Lincoln’s bodyguard might be involved in his assassination as he was nowhere to be found when he was attacked.

27. Throughout the time Abraham Lincoln was shot and passed away, he was in a Coma.

28. The Ford Theater is famous for being the place where Lincoln was shot on the 14th of April, 1865.

29. John F. Kennedy and Abraham Lincoln share some similarities as both were shot in the head.

30. Despite winning the 1860 Presidential Elections, Lincoln failed to win a single state from the South.

32. On the 1st of January, 1863 issued the famous Emancipation Proclamation Act freed all the slaves in the confederate states.

33. Lincoln is held in high esteem among the presidents in US history with an average historical ranking of 1.6.

34. Lincoln was the first President to have introduced the federal income tax which was set at a staggering 3%.

35. Before becoming the President of the United States of America, Lincoln learned the ropes and garnered the needed political experience having served four terms in the Illinois House of Representatives.

36. Abraham Lincoln’s wife’s name was Todd and he was blessed with four children.

37. At a height of 6 feet, 4 inches, Abraham Lincoln is the tallest President in the history of the US.

38. Although it was later annulled constitutionally, Lincoln’s most controversial executive order was suspending the right of habeas corpus.

39. At the age of 52 years and 2 weeks during his inauguration, Lincoln remains one of the youngest presidents in the history of the US.

40. Interestingly, Lincoln established the $300 get out of the draft policy during the civil war.

41. Over 620,000 soldiers died during the Civil war under the regime of Abraham Lincoln. The figure stands at the highest number of deaths in any war in U.S. history.

42. Lincoln’s first job was that of a Postmaster in New Salem, Illinois.

43. Abraham’s mother died when he was 9 has suffered from a strange “Milk Sickness” that cut across the whole of Southern Indiana.

44. It is strongly believed that Lincoln suffered from clinical depression as he didn’t have any close personal friends and told jokes and stories and odd times.

45. Lincoln was usually afraid of talking to women for longer hours.

46. Lincoln envied Stephen Douglas a lot as he once lost a senatorial seat against him in the 1858 election and as well as Douglas once dated his wife.

47. The connection between Abraham Lincoln is unmatched as both presidents’ successors were named Johnson.

49. Lincoln’s first government position was as an Illinois State Legislator between 1834 to 1835.

51. However, in 1854 he reentered politics and became the leader of the newly formed Republican Party.

52. Despite being an all-around statesman, Lincoln was also a Poet and was often referred to as the one and only Poet President.

53. Lincoln’s first Vice President Hannibal Hamlin was replaced by Andrew Johnson at the beginning of his second term.

54. Abraham Lincoln’s election in 1860 triggered the succession movement in the South.

55. Abraham Lincoln was the most photographed President of his era.

56. Unlike Abraham Lincoln, his wife Mary Todd came from a wealthy family in the South and was one of the most prominent first ladies in history.

57. The Gettysburg address remains one of the most famous speeches in American history as it was duly written and delivered by Abraham Lincoln.

58. Only a few can match the life and legacy of Abraham Lincoln as the 16th President of the United States of America changed the face of the nation greatly.

60. Interestingly, help comes in different forms as the brother of the man who assassinated Abraham Lincoln named Edwin Booth pulled Robert Lincoln to safety at a train station after he had fallen on the tracks.