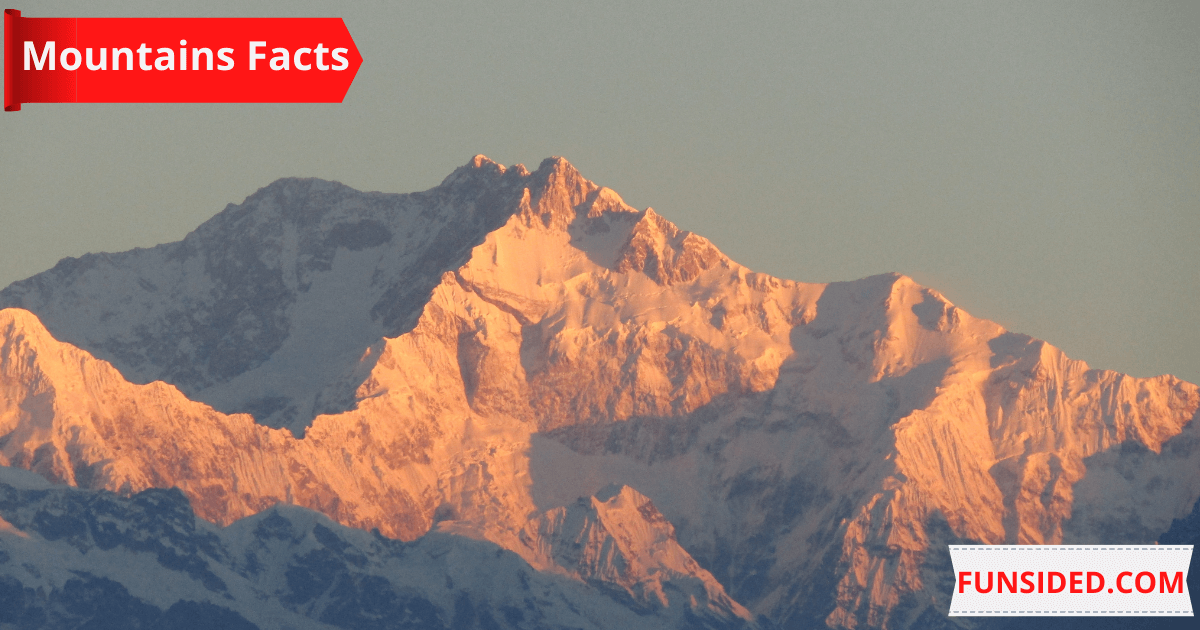 Do you know that the tallest mountain in the solar system is found on Mars? Mountains are often described as a large natural elevation of the earth’s surface rising abruptly from sea level or a large steep hill. However, in this article below we will be exploring some deep and unusual  mountains facts that will blow your mind:

1. An average of 1200 people try to climb Mount Everest but only half of them get to the summit of the mountain.

2. About thirty percent of the world’s highest mountains are believed to be domiciled in the Himalayas.

3. The Himalayas mountain was surprisingly formed about 55 million years ago when the earth’s crust crashed against each other.

4. At a jaw-dropping 29,035 feet, the summit of Mount Everest is believed to be the highest above sea level.

5. Mountains are often considered to be a sacred place for most religious worshippers across the globe as they believe God reveals himself to humans.

6. An average of six people die yearly while trying to climb Mount Everest.

7. Five of the tallest mountains in the solar system are believed to be from Mars.

8. In the Holy Bible, it was recorded that Moses received the ten commandments from God while on Mount Sinai in Egypt.

9. The tallest mountain in the solar system is found on Mars and it’s around 15.5 miles tall.

10. It would intrigue you to know that mountain goats can jump up to 12 feet in a single bound due to their unique cloven hooves.

11. The mountain lion territory has been greatly invaded by humans and has in turn led to an increase in mountain lions attacking them.

13. In the 19th century, mountaineering first become a sport as people looked for ways to escape from the toils of industrialization to climb mountains for enjoyment not for scientific purposes.

14. Mountaineering further gained popularity after World War II due to improvements in weapons and tools by the European armies.

15. It is strongly believed that a lot of mini-gods lived on mountain tops according to the Greeks, Scandinavians, Canaanites, and the Masai.

16. Highly revered Islamic prophet Mohammad is believed to have received a lot of revelations that make up the Quran while in a cave in Mountain Al-Nour, near Mecca.

17. Funny as it may sound, the Mountain Disappointment in Australia was named as such due to the fact that the first set of explorers found the mountain to be below standard.

18. The world’s second tallest mountain known as K2 is believed to be inaccessible to many and only a few people know about it existence.

19. Even though Mount Everest is the tallest in the world, Mount Chimborazo is believed to be the furthest away from the center of the earth.

20. Research suggests that over 100,000 mountains are still unaccounted for under the sea.

21. Geologists have found that the Adirondacks mountains are growing 1.5 to 3 millimeters in height annually.

22. It would interest you to know that Venus has a “Snow-Capped” mountain. Although, the Snow is astonishingly made of metal.

23. In the Netherlands, the largest mountain is found in the Caribbean.

24. On the 29th of May 1953, history was made as New Zealander Edmund Hillary was officially the first person to climb Mount Everest alongside Nepalese Sherpa Tenzing Norgay.

25. In May 2010, Jordan Romero became the youngest person to climb Mount Everest. He achieved this superlative achievement at the age of 13 years, 10 months, and 10 days.

26. At the age of 80 years and 224 days, Japan’s Yuichiro Miura became the oldest man to reach the summit of Mount Everest.

27. Majority of the dead bodies on Mount Everest are left to decay there because it would take a jaw-dropping £20,000-£50,000 to bring them back down from the mountain.

31. Whenever on Mount Everest summit, humans make use of three times the number of oxygen they would use normally on the ground.

33. Sounds weird but in 2005, the first two people to ever get married on the summit of Mount Everest were Pem Dorjee and Moni Mulepati.

34. The tallest building in the world is the Burj Khalifa which is around 830 meters high but the Mount Everest is still believed to be 10 times taller.

35. The saddest day in the history of Mount Everest was in April 2015 when an earthquake of magnitude 7.8 hit Nepal and killed over 9,000 people.

36. Wind speeds on mountains can travel up to 200miles per hour.

37. At its coldest, the temperature of mount Everest is believed to be as low as -60°C.

38. Sounds unbelievable, but in May 2001, the first blind man to reach the summit of Mount Everest was Erik Weihenmayer.

39. In 1975, Junko Tabei became the first woman to reach the summit of Mount Everest.

40. Age is no barrier to reaching our goals, on the 19th of May in 2012, Tamae Watanabe became the oldest woman to climb Mount Everest at the age of 73 years and 24 weeks.

41. Tashi and Nungshi Malik in May 2013 became the first set of twins to reach the top of Mount Everest.

42. 92 out of the 95 highest mountains of Africa are believed to be distributed across six nations which includes Ethiopia, Morocco, Uganda, DR Congo, Kenya, and Tanzania.

43. Despite being the 84th largest country in the world, Belarus has no single point of elevation above 500metres to be considered a mountain.

45. Mountains provide up to one-tenth of homes to people on the globe.

46. Mountains make up to one-fifth of the world’s landscape.

47. Mountains are believed to occur more in oceans than on land.

48. About 80% of the earth’s freshwater comes from the mountain.

49. In some mountainous areas, the rivers are permanently frozen. These are called Glaciers.

50. The 40th highest mountain in the world is the Gangkhar Puensum in Bhutan with a height of 24,981 feet.

51. There is no generally accepted definition for how tall a hill will be before it can be called a mountain. Some set of people believe it should be 2,000 feet and above while others suggest otherwise.

52. Due to the high rate of tectonic plate movement, it is widely believed that Mount Everest grows by 4mm every year.

53. In the 15th century, Anthony de Saldanha was the first recorded hike on the top of the Table Mountain.

54. The first cableway for transporting visitors who don’t want to hike to the top of the table mountain was first created in 1929.

55. Table mountains is believed to have a lot of caves and the largest of them all is the Wynberg.

57. One of the most popular places for tourists in cape town is Table mountain averaging over 800,000 visits per year.

58. The most common animal found on the Table mountain is a mammal that looks exactly like a guinea pig often called the Rock Hyrax or Dassie.

59. The table mountain is believed to be one of the oldest in the world has been in existence for over 600 million years ago.