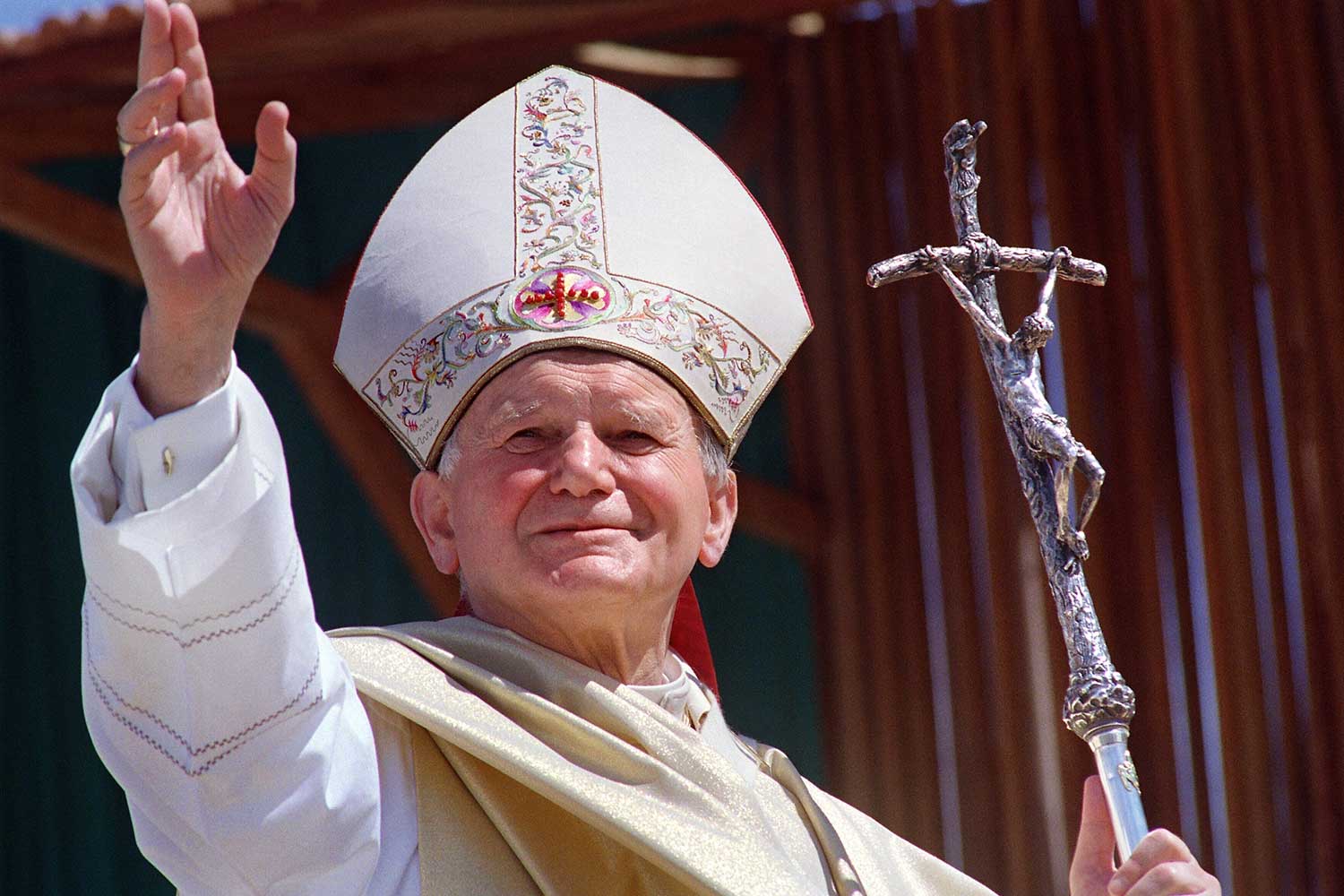 Emerging as one of the 5 greatest Popes in history, Pope John Paul II is indeed a colossal historical figure. Read on to discover more fascinating facts about this great man.

1. Pope John Paul II was the 264th Pope of the Catholic Church.

2. His official title was: Bishop of Rome, Vicar of Jesus Christ, Successor of the Prince of the Apostles, Supreme Pontiff of the Western Church, Patriarch of the West, Primate of Italy, Archbishop and Metropolitan of the Province of Rome, Sovereign of the State of Vatican City.

3. John Paul II was the second longest-serving pope in modern history after Pope Pius IX, who served for nearly 32 years.

7. He attracted one of the largest crowds that ever assembled in human history, the Manila World Youth Day, which gathered around 7 million people, the largest Papal gathering ever, according to the Vatican.

8. Pope John Paul II became the first pope known to have made an official papal visit to a synagogue, when he visited the Great Synagogue of Rome on 13 April 1986.

9. He had one of the most prolific pontificates in history, publishing, 14 encyclicals, 15 apostolic exhortations, 11 apostolic constitutions, 45 apostolic letters, and 28 motu proprios.

10. Considered one of the Catholic Church’s leading thinkers, he participated in the Second Vatican Council (the council that reviewed the church doctrines).

11. Many years after the council, he admitted that he wrote a lot of poetry while it was in session: “You know, I wrote many parts of books and poems during the sessions of the Council.”

12. After he was beatified, his title was changed to Blessed John Paul II.

13. His predecessor Pope John Paul I, had this to say about him: “My name is John Paul the first. I will be here only for a short time. The second is coming.”

14. In 1986, he invited the leaders of all major religions to Assisi, Italy, for a universal prayer service for world peace.

15. In 1995, he held a meeting with 21 Jains (a sect that broke away from mainstream Hinduism in 600 BC), organized by the Pontifical Council for Interreligious Dialogue.

16. He is recognized as helping to end Communist rule in his native country, Poland, and eventually all of Europe.

17. He was an accomplished linguist. He was able to speak several languages fluently.

18. He had a great passion for drama and literature and published several academic books, essays, poems, and plays.

19. If you put together everything he wrote, it would equal the length of 20 Bibles.

20. He was an accomplished actor and playwright in Poland before he entered the seminary.

21. He earned two doctoral degrees, one from the Pontifical University of Saint Thomas Aquinas in Rome and the other from Jagiellonian University in Poland.

22. His love for the human person extended far outside the confines of the Catholic Church, to all religions, all races, and all languages.

23. An exception to his theological conservation was the customary Vatican policy of neutrality, which he abandoned as he campaigned for religious freedom and national independence.

24. He kept a map in which he marked every diocese in the world, and knew each bishop by heart!

25. John Paul II was one of the most widely traveled Pope in history, visiting over 126 countries during his time as Pope.

26. He was a sportsman, engaging in weight training, jogging, swimming, and hiking.

28. He loved spending time outdoors with youths and spent most of his hours outside the Vatican.

29. He was described by one of his secretaries as a “volcano of energy”, as he had a gift of split concentration and multitasking.

30. Even as a pope, he was very accessible and more than half a billion people claimed to have seen him in person on different occasions.

31. Pope John Paul II was a very charitable man and loved to give.

32. After publishing his book “Crossing the Threshold of Hope” he used the first royalty payments to rebuild churches that had been destroyed by the conflict in Yugoslavia.

33. According to the Pope himself, the happiest day of his life was the day he canonized Sister Faustina as the first saint of the new millennium.

35. He is the only Pope to have been portrayed in a comic book by ‘Marvel Comics.’

36. He beatified 1,340 people and canonized 483 saints, more than the combined tally of his predecessors during the preceding five centuries.

37. His wish was, “to place his Church at the heart of a new religious alliance that would bring together Jews, Muslims, and Christians in a great religious armada.”

38. He significantly improved the Catholic Church’s relations with Judaism, Islam, and the Eastern Orthodox Church more than any other Pope before he had done.

39. He was a key figure in the Polish struggle against the Nazis.

40. He emphasized the need for the Church to apologize for past wrongdoings, brutalities committed against indigenous peoples, women, ethnic and racial minorities, people of other faiths, and suspected heretics.

41. The famous theologian, Yves Congar wrote this about him, “…his personality dominates. Some kind of animation is present in this person, a magnetic power, prophetic strength, full of peace, and impossible to resist.”

43. A key goal of his papacy was to transform and reposition the Catholic Church.

44. Pope John Paul II was criticized for allowing and appointing liberal bishops in their sees and thus silently promoting Modernism.

45. He officially condemned acts of contraception, abortion, and homosexual acts as gravely sinful, and, with Joseph Ratzinger, he opposed liberation theology.

46. In fact, he characterized abortion and euthanasia as a “culture of death.”

47. During his time as Pope, the church was involved in a large number of claims about child sexual abuse by priests.

48. In June 1979, Pope John Paul II traveled to Poland, where ecstatic crowds constantly surrounded him and gave him a wild applause that lasted for 14 minutes.

49. He had faced an attempted assassination on 13 May 1981, in St. Peter’s Square in Vatican City, where he was shot and wounded by Mehmet Ali Ağca while he was entering the square.

50. Ağca was sentenced in July 1981 to life imprisonment for the assassination attempt but was pardoned by Italian president Carlo Azeglio Ciampi in June 2000 at the request of Pope John Paul II.

51. When he went to Portugal’s Shrine of Our Lady of Fátima to give thanks for his recovery from the gun wounds, another attack on his life was attempted.

53. He knew what physical suffering was as he suffered multiple health challenges, especially after recovering from the detrimental effects of the gun wounds as a result of the first assassination attempt on him.

54. Even when he had the option of resigning from his papacy as a result of his failing health, he did not allow his health to deter him.

57. Pope Benedict XVI waived the traditional five-year wait period for beatification and canonization and commenced the canonization of Pope John Paul II, one month after his death.

Hope you enjoyed the ride of uncovering fun facts about Pope John Paul II, please tell us your view in the comment section below. What to know more about tourist cities? Check out 61 Interesting and Fun Facts About Pope Francis or 61 Surprising And Fun Facts About Vatican City