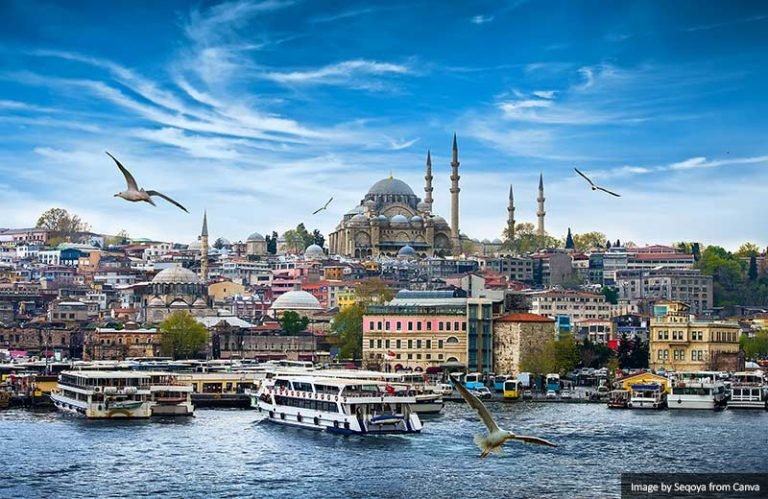 Istanbul is a city in Turkey that has a lot of political, cultural, and religious histories. It was once the capital city of three different empires in the past and is currently one of the best places to travel to for vacation or as a tourist. Do you know that about 66% of Istanbul’s population lives in Europe while the remaining 34% lives in Asia? We have collected interesting and fun Istanbul facts, most are jaw-dropping, happy reading!

1. Istanbul is the only city in the world that is transcontinental, it is located in both Europe and Asia.

3. In terms of the largest city in the world by population within city limits, Istanbul comes 2nd with its population of about 13.9 million.

4. Tourism is one of the things that gives Istanbul revenue and it is the fastest-growing tourism destination in the world.

5. If you want to visit the place where most of the famous sights of Istanbul are located, you should visit the Sultanahmet or the old city.

6. Beşiktaş J.K. was established in 1903 as Turkey’s only club and some of the other oldest sports clubs in Turkey reside in Istanbul.

7. In the ranks of the fastest-growing metropolitan economies, Istanbul comes seventh.

8. The 3rd oldest subway in the world which was constructed in 1875 was built in Istanbul.

9. The Grand Bazaar which is located in Turkey is one of the oldest and largest covered markets in the world that was established in 1461.

10. Galleria Atakoy which was established in 1987 in Istanbul was what introduced modern shopping malls in Turkey.

11. The Turkish post office didn’t deliver the mail addressed to Constantino because they wanted people to adopt the name Istanbul after 1930.

12. In the 2014 Travellers’ Choice Destinations awards, voted for by millions of holidaymakers, Istanbul came out first beating Paris and other cities.

13. There are about 237 hamams (Hamam is a type of steam bath for Muslims) in Istanbul, but only about 60 are in use.

14. During the time of the Ottoman Empire, Istanbul already had about 1400 public toilets in the city while Europe had none.

15. The estuary that separates the European side of Istanbul into distinctive districts is the Golden Horn.

16. If you want a 360-degree viewing gallery of the city, the Galata Tower that was built in 1348 to house prisoners of war offers that.

17. In the past, solid espresso was an invigorating medication in Istanbul, accordingly drinking it was unlawful and was rebuffed.

18. In the past, Istanbul has had several names before the current one which includes Byzantium, Constantinople, Stamboul, and Tsarigrad.

19. In 2010, Istanbul was the European cultural capital city but it has never hosted the Olympics.

20. Hagia Sophia is one of the most notable sights of Istanbul that was initially a church but was later used as a mosque. It was the biggest church in the world for about 900 years.

22. In Istanbul, there are many societal backgrounds, but in terms of religion, about 99% of the population are Muslims.

23. In Istanbul, cats are considered the most favorable pets, ahead of dogs.

24. Although Tulips are an outstanding image of the Netherlands, its story started in Turkey where the tulip exchange thrived in Istanbul.

25. The Turkish organization Pugedon has presented in Istanbul a reusing box that discharges water and nourishment for stray canines and felines.

26. In Istanbul, coffee became known from the 17th century, during the Ottoman Empire.

27. Although situated by two oceans, Istanbul doesn’t have seashores anywhere near the middle.

28. In Istanbul, about 66% of its population lives in Europe while the remaining 34% lives in the Asian side.

29. Although Istanbul is not the capital of Turkey, it is considered the monetary heart of the country.

30. Most of the citizens of Istanbul cannot communicate well in English and often prefer to give written notes in the case of taxi drivers.

31. It is believed that a way to get together with God is through the Mevlevi Sema Ceremony, famously known as the Whirling Dervishes.

33. In the 1630s, people who lived in Istanbul believed that by utilizing counterfeit wings and the breeze from the highest point of the Galata Tower, you can travel to another landmass.

34. For more than thousands of years, the Valens Aqueduct conveyed water into the old city.

35. 471 years before the first was manufactured, the great artist and inventor, Leonardo da Vinci imagined an extension over the Bosphorus.

36. Just like the city of Rome, Istanbul is established on 7 hills and is often represented by 7 hills.

38. The Bosphorus is what isolates Europe from Asia in Istanbul. This is a characteristic waterway running directly through Istanbul.

39. During the time of three significant Empires: the Eastern Roman Empire, Byzantine Empire, and the Ottoman Empire, Istanbul was the capital city.

40. With the greatest number, you can have in a mosque, six, Blue Mosque is the main mosque in Istanbul with six minarets.

41. There are about two suspensions connected on the Bosphorus Strait interfacing Europe to Asia.

42. With over 3, 000 shops, the Terrific Bazaar is the greatest old canvassed bazaar in the world.

44. It was from Istanbul that the 4 bronze ponies that are enlivening today San Marco Cathedral in Venice were taken from in the 13th century by crusaders.

45. The first auto collision occurred in 1912 in the Sisli district of Istanbul and the driver worked for the Italian embassy.

46. In the city of Istanbul, more than 16 thousand tons of trash are gathered every day.

47. On the shores of the Black Sea is where the greatest air terminal on the planet is presently under development.

48. Istanbul is the force behind what makes Turkey the second biggest exporter of TV arrangements on the planet after the US.

49. In the Middle East and the Balkans, 3 out of 3 people have viewed a Turkish drama.

50. There is an old walled city of Istanbul that stands on a triangular peninsula between Europe and Asia.

51. For more than 2500 years, Istanbul has been around conflicting surges of imperial power, culture, and religion.

52. The southwest winds of Istanbul, also known as Lodos, are what cause the storms on the sea of Marmara.

53. Originally, the Old City of Istanbul was about 9 square miles which is equivalent to 23 square kilometers and it had seven hills.

54. All the structures that are around the old city were marked as A World heritage site by UNESCO in 1985.

55. There is what is known as the “three seas” in Istanbul which comprises the waters washing the peninsula and they include the Golden Horn, the Bosporus, and the Sea of Marmara.

56. The prevailing northeast wind in Istanbul has its source from the Black Sea.

57. More than 60 conflagrations (conflagrations are severe fires that destroy a lot of lives and property) have been recorded to have occurred in Istanbul.

59. The land wall which helps to isolate the peninsula from the mainland has been breached one time with a cannon.

61. Each day before dawn, the center spans of the Galata and Atatürk bridges are opened before dawn to allow ships to pass through.