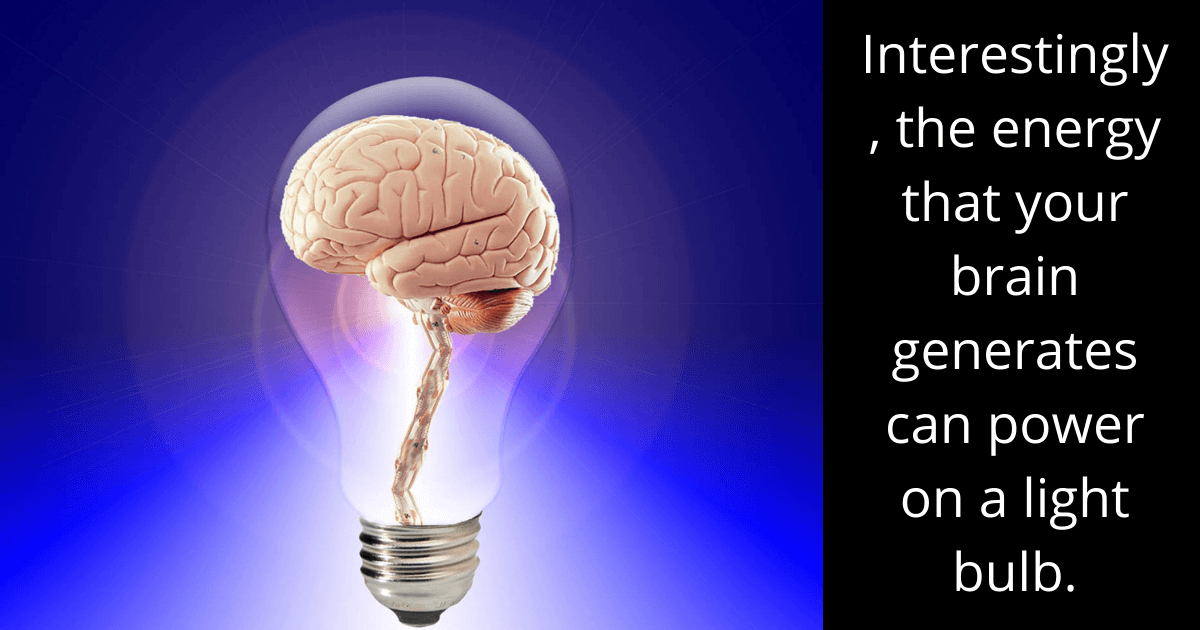 The brain is not only a very important organ since our life practically depends on it but also an interesting organ to learn about. Imagine knowing what is going on in your brain as you are reading this, won’t that be fascinating. We have carefully putten together some amazing facts about the brain in this article, so you can discover some interesting things about your brain.

1. The information in the brain moves between 1 mph to an amazing speed of 268 miles per hour which is faster than some Formula 1 race cars.

2. Interestingly, the energy that your brain generates can power on a light bulb.

4. You can develop your child’s brain faster by talking and reading aloud to them often.

5. Interestingly, it takes more time than any other organ in the body to develop.

6. Relying on GPS constantly to navigate will destroy your inborn sense of direction.

7. Brain cells will start eating themselves as a last attempt not to starve.

8. Cholesterol is an integral part of the brain and 25% of the cholesterol in our body is in the brain.

9. Each neuron in the brain connects with at least forty thousand synapses.

10. If your brain does not receive oxygen for more than 5 minutes, it will be damaged permanently.

11. More than 250,000 neurons per minute are developed during the early stage of pregnancy.

12. For human beings, the brain stops growing when you reach around the age of 18 years.

14. The cerebellum makes up about 85% of the weight of the brain in humans.

15. When you are drunk, your brain will not be able to form memories again.

16. Although the brain is only about 2% of the whole body, it takes almost 20% of the energy used in the body.

17. The brain is the fattiest organ in the body because it contains almost 60% of fat.

18. There are about 86 billion neurons in the brain according to brain experts.

19. The size of the female brain is about 10% smaller than the male brain in accordance with body proportion.

20. The brain can distinguish between your touch and another external touch which makes it hard to tickle yourself.

22. The brain has the ability to process the image that your eyes have seen for as little as 13 milliseconds.

23. The brain storage capacity, according to experts, is capable of storing unlimited information.

24. The brains of extroverts and introverts have been discovered to be different in some ways.

25. The animal with the biggest brain is the sperm whale with a brain weight of 17 pounds.

26. Although the brain doesn’t have the ability to store energy, it needs a constant supply of energy.

27. Our homo sapiens brains are about 10% lesser than Neanderthal brains.

28. Male and female brains have been discovered to react in a different ways to pain.

29. The brain cells will die if it starts lacking enough cholesterol.

31. According to neurosurgeons, about 73% of your brain is made up of water.

33. Interestingly, the theory about the left vs. right hemisphere of the brain is completely false.

34. Brain experts say that chimpanzees and humans have about a 98% brain similarity.

35. Amygdala is a part of your brain that is responsible for detecting how another person is feeling using their facial expressions.

36. The brain does not have any pain receptors, so it cannot feel pain even when hit by a stick.

37. Interestingly, the brain is so fragile that a hard touch from a finger can deform it.

38. If you sweat for 90 minutes, your brain can temporarily age for a year.

39. Your brain will be made healthy when you have a daily exercise routine.

40. About 70% of the thoughts produced by the brain on a daily basis are pessimistic (tending to see the worst aspect of things or believe that the worst will happen).

41. The brain size at birth is almost the same as an adult brain because the brain already contains all the brain cells you may need for life.

42. The blood that flows around the brain is enough to fill a bottle of wine or a liter bottle of soda.

43. When we experience constant stress, our brains will start shrinking.

45. Brain experts believe that a human brain may retain one quadrillion separate bits of information throughout its lifetime.

46. Every year, more than 50, 000 people die because of complications of brain injuries.

48. The pattern of connectivity in our brain is as unique as our fingerprints.

49. The brain of a baby consumes about 60% of the entire energy in its body.

50. Research shows that over the last 20,000 years, human brains have gotten significantly smaller.

52. The human brain can carry out about 1016 processes per second, more powerful than any existing computer.

53. A quality brain supplement can help you to improve your memory and keep your brain healthy.

54. Because of modern technologies, the human brain has evolved in many ways.

55. The part of the brain that controls emotions and memories, is connected with the sense of smell.

56. The reason why you are capable of learning is because of the gamma brain waves.

57. It requires activity in five different areas of the brain to laugh at a joke.

58. Research shows that the average IQ of humans has gone down since the 1880s.

59. Eyeballs have been established to be a direct physical extension of the brain.

60. The human brain forgets about 90% of the dream after 5 minutes of waking up from sleep.

61. Albert Einstein’s brain was said to be 18% smaller than the normal brain.