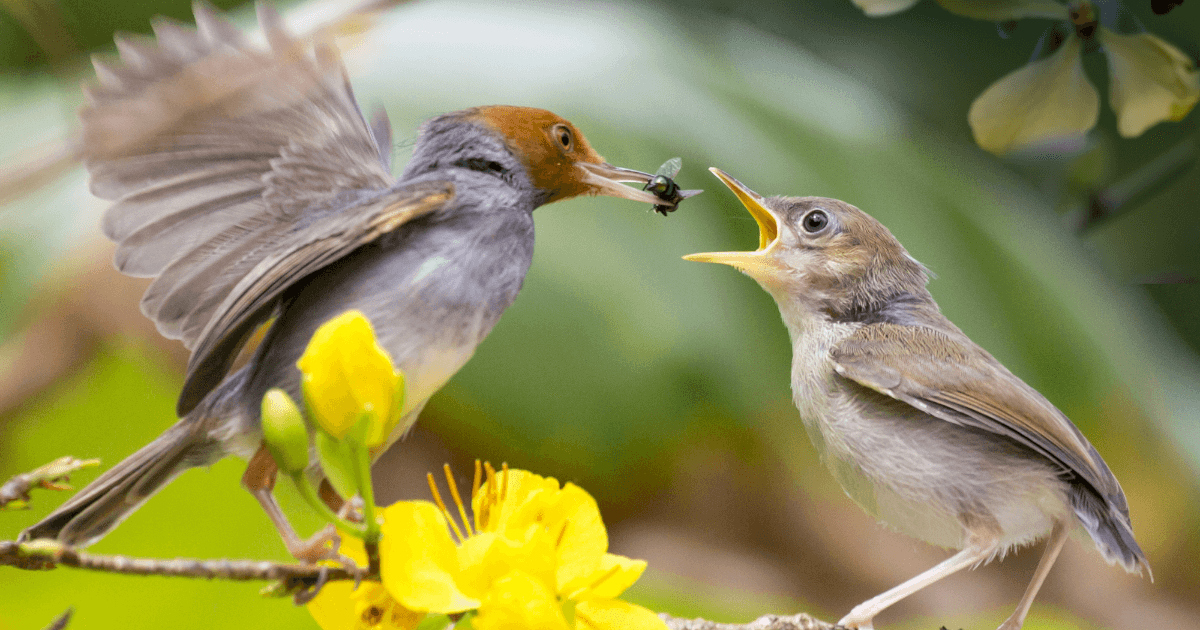 Do you know that Albatross birds can fall asleep while flying at 25 miles per hour? Birds are one of the most beautiful and mysterious creatures on earth. With over 9000 plus different species of birds in the world, we will be exploring some unknown and fascinating bird facts in this article.

1. Astonishingly, a chicken with white earlobes will lay white eggs while that with red earlobes lay brown eggs.

2. Penguins are extremely high jumpers and can jump up to a massive 6 feet up in the air.

3. Often known for its running and stopping, the Robin bird was voted the most popular wild bird in the UK.

5. The Ostrich is the largest living bird in the world and also lays the largest bird egg weighing approximately 160kg. In height, it is believed to be around 2.7metres.

6. The earliest known birds surprisingly date back to over 147 million years ago and are often called the Archaeopteryx. Unlike the modern birds, the Archaeopteryx is believed to have a long bony tail, three claws on the wings, and also had teeth.

7. The most poisonous bird in the world is known as the “Hooded Pitohui” of Papua, New Guinea. Their poisons can be found in their skins and feathers.

8. Sounds strange but the Albatross bird can fall asleep while flying at 25 miles per hour.

9. Parrots are often known for their talkativeness but the African Gray Parrot surprisingly averages over 800 words per day.

10. With only 25 of its kind believed to be in the wild, the rarest bird in the world is called the Madagascar Pochard.

12. The Puffin birds can astonishingly fly underwater and travel at a speed of 55miles per hour.

13. Interestingly, the fastest bird on earth is the Peregrine Falcon and can reach an unbelievable maximum airspeed of 242 miles per hour when hunting.

14. The Hummingbird is the smallest living bird in the world and weighs about 1.9grams and 5.5cm long.

15. The rainforest is believed to be the home of 2/3 of all the bird species in the world.

16. It would fascinate you to know that there are over 9,500 species of bird in the world.

19. The bird with the most feathers is called the “Whistling Swan”. It is believed that they amazingly have up to 25,000 feathers.

20. Research suggests that Flamingos stay together with their partners for more than 50 years and can also pair for a lifetime.

21. An estimated 40 million pet birds are domiciled in the US.

22. Surprisingly, a bird’s feather is heavier than its skeleton.

23. The heaviest bird weighs up to a jaw-dropping 12kg and it is usually called the Andean Condor.

24. Research suggests that over 75% of wild birds astonishingly live for less than a year. The larger the bird the higher their chances of living longer on earth.

25. Interestingly, Gentoo Penguins are the fastest breed of swimming birds traveling at a ridiculous speed of 22mph while the Emperor Penguins can impressively stay underwater for 18 minutes.

26. It would intrigue you to know that the Bar Headed Geese fly across the tallest of Mountains and nearly up to an unbelievable 8,000m above sea level.

27. The European Wren’s song is believed to be made up of over 700 notes in a minute and can be surprisingly heard from 500metres away.

28. Though they are believed to be extinct, the biggest bird ever to exist is the Flightless Elephant bird and weighs a mammoth 450kg in size.

29. The only bird that spends more time in the air than others is called the “Sooty Tern”. It is believed that they fly over the oceans and amazingly fly for almost three years without settling on the land.

30. Birds fly in linear formations astonishingly because it helps save their energy and also aid communication amongst other birds.

31. Quite fascinating to know that the Albatross bird can fly for up to six hours without moving its wings.

32. Interestingly, the heaviest bird to fly in the air is called the Kori Bustard is found majorly in East and South Africa and weighs about 14-18kg. Due to their weight, they only fly for emergencies and short distances.

33. The slowest flying bird is called the American woodcock and surprisingly flies at a lowly speed of just 5 miles per hour.

34. Birds are so unique in nature that they sense the tiniest changes in the weather.

35. Crows are so mysterious in nature and they don’t forget humans face easily especially when associated with bad experiences. Amazingly, they can share their grudge with a person to other crows.

37. The Bald Eagle impressively builds the largest tree nest of any bird measuring about a whopping 9.5ft in height.

38. The Cassowary is often considered the most dangerous bird in the world due to its ability to kill its prey with just a kick.

39. Birds raised for meats and eggs are stupendously the biggest source of proteins eaten by humans.

40. According to a wildlife study in the US, approximately half a million birds are often killed by wind farms.

41. On average, over 200 people have died since 1988 due to airborne collisions between airplanes and birds.

42. Unlike humans, a Vulture’s stomach acid is 10 times stronger than that of humans and can therefore ingest carcasses that have already been infected with Anthrax.

43. Sounds strange but they are more Fake Flamingos on Earth than genuine ones.

44. Contrary to opinion, only the Wedged tales eagle have a better sight than humans of which is believed to be 2.5 times better than humans.

45. Astonishingly, a flock of ravens is often called a conspiracy or unkindness.

46. A jaw-dropping 2/3 of birds in North America are believed to be on the verge of extinction due to climate change.

47. Research suggests that for a bird to fly efficiently it must weigh below 15kg.

48. Birds don’t generally have a high life expectancy, although the oldest bird lived up to 80 years old.

49. Some species of birds are actually very strong as the Eagle can astonishingly fly away in the air with a deer in its claws.

50. Unlike other eggs that get done in two minutes, the Ostrich eggs surprisingly take up to 2hours for them to be hard-boiled.

51. Despite been popularly known for their ability to migrate easily due to climate changes, surprisingly only 20% of birds migrate long distances per year.

52. An estimated 2 billion birds are believed to be living on planet earth.

54. The beak of a bird surprisingly shapes the kind of food they eat.

55. Astonishingly, the canary birds can regenerate their brains, unlike humans.

56. The Ruppell’s Vulture is believed to have reached an all-time high altitude of about 11,277 meters.

57. Surprisingly, the only wingless bird in the world is the Kiwi bird of New Zealand.

58. In Ancient Greece, Pigeons were often used to deliver the results of Olympic games and were also used to relay messages during World War II.

59. Interestingly, the Bassian Thrushes bird dislodge their prey by farting in their faces and causing them to move around in an attempt to reveal their location.

60. The Black and White coloring of the Penguins are often used as Camouflage to protect them from predators and prey underwater.

61. Ravens are believed to be able to surprisingly imitate humans speech and sound.