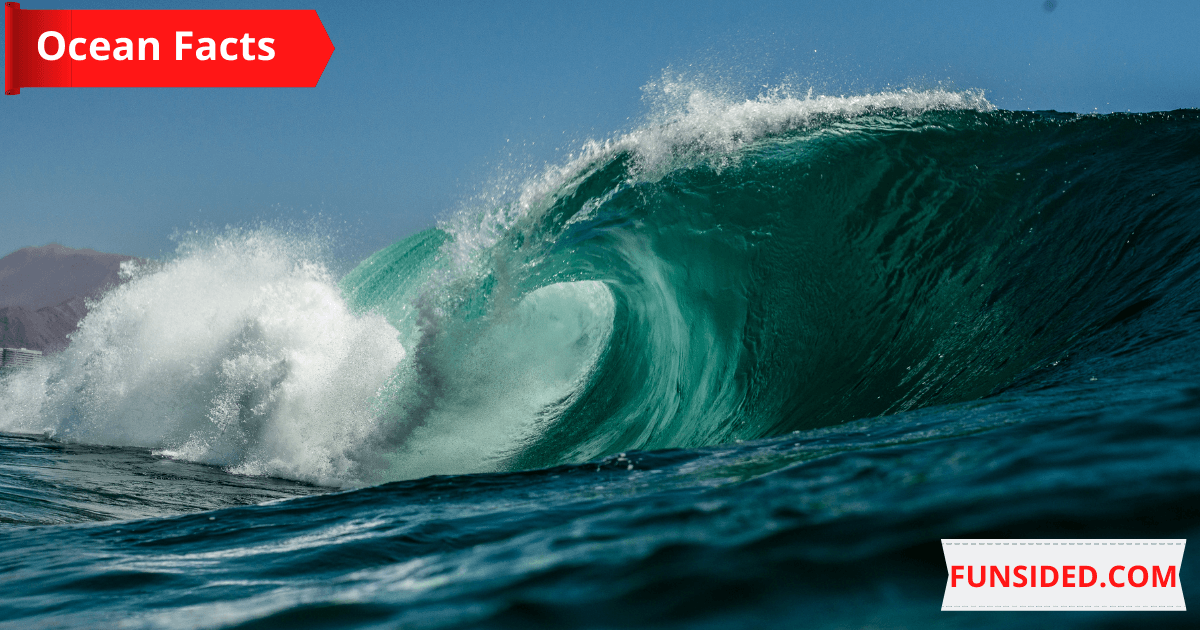 Do you know that octopuses have three hearts and their blood is blue in color? It’s no longer news that over 71% of the earth’s surface is covered by water. The ocean is full of unending mysteries and in the article below, we will be sharing with you some unusual and fascinating ocean facts.

1. Due to its Exclusive Economic Zone it is believed that over 50% of the US is beneath the Ocean.

2. It might look bizarre but the ocean actually moves. Although, the movement is very slow and it is believed that an estimated parcel of water will take up to 1000 years to complete a full cycle around it.

3. The pacific ocean is the largest ocean. It is believed to be 12,300 meters and five times wider than the moon in terms of diameter. Also, it contains a jaw-dropping 25,000 islands.

4. Research suggests that only 5% of the ocean has been explored. Hopefully, over the next decade or century, ocean researchers will explore more with the rate of advancement in technology.

6. Over 70-80% of the oxygen humans breathe is produced from Marine plants in the ocean.

7. It would interest you to learn that the ocean harbors more historical facts than all the museums in the world combined. Over 20 million tonnes of gold are believed to be in the oceans.

8. Ahmed Gabr holds the world record for the deepest scuba dive at 332.5 meters at the Red Sea in 2014. Despite reaching the depth within 12 minutes, it took him an incredible 15 hours to ascend to the surface.

9. The world’s longest chain of mountains which is the Ocean Ridge, is believed to be beneath the ocean with an unbelievable 65,000 km distance.

10. The largest animal migration by mass occurs daily in the ocean and it’s often called the Diel Vertical Migration.

11. Research suggests that Greenland sharks that were born in the 16th century can live up to 400 years.

12. Dolphins are one of the most friendly creatures on earth and it is believed they have X-ray visions that make them see through other animals.

13. It’s fascinating to know that Corals (marine invertebrates) can be used for patients who require bone surgery due to the similarities they share with humans.

14. Contrary to opinion, over 20 people are killed by Sharks annually while 11,500 sharks are killed per hour by humans.

15. Unlike humans, the gestation period of a Frilled Shark is three and a half years which is equivalent to 42 months.

17. Still looking for the animal with the biggest nose? Don’t look too far as the Sperm Whale undoubtedly wins it. They use their large snouts to create loud noises in the depth of the ocean and also use it to aid communication in the pitch-black waters.

18. Starfish are usually born with some rare defects from birth and instead of having a star shape, some of them surprisingly have a square shape.

19. The rainbow octopuses have an exceptional case of sexual dimorphism in the animal kingdom. While the females grow six feet in length, the males only grow one inch long.

20. Size is not a major problem for Harlequin Shrimps while feeding on starfish up to 10 times their size. They flip on their prey so they can’t escape.

22. The Ghostfish is the deepest living fish ever recorded. It was recorded during a live dive at the Mariana Trench at a depth of 8,143 meters.

23. The Gray Whale holds the record for the longest mammal migration ever traveling at a speed of 22,511 km over the course of 5 months and 22 hours.

24. Unlike humans, octopuses have three hearts and their blood is blue in color. While one is responsible for the pumping of blood to the body the remaining two branchial hearts pump it through their gills.

25. Seaweeds are highly invaluable in our everyday products which include beers, papers, ceramics, ice creams, adhesives.

26. Research suggests that Dolphins have accents and dialects. Dolphins from the same species have shown over time they can communicate by making different sounds.

27. Surprisingly, Octopuses are wired differently unlike other animals. They can regrow their detached arms and brain tissues because their centralized brain can extend into their arms.

28. According to research, it is believed that an estimated 7 million tons of plastics are dumped into the ocean annually. Interestingly, fishes in the north pacific ocean ingest an average of 12,000 to 24,000 tons every year.

29. The tallest underwater waterfall in the world is the Denmark strait cataract located in the Atlantic ocean between Greenland and Iceland. Water is believed to be falling at the rate of 11,000 feet and it carries over 175 million cubic feet of water per second.

30. The world’s sixth-largest river is below the Black Sea and it’s 350 times larger than the Tames and 150 times deep.

31. A Brinicle achills forms beneath the sea and kills everything in its path. It forms beneath sea ice when extremely cold saline water is introduced to an area of ocean water creating an ice stalactite.

32. Red tide is often referred to as Algae Bloom by scientists. Some red tides are responsible for the production of natural toxins and depletion of oxygen or other adverse effects that are really dangerous. Manatees are killed annually by red tides and eating contaminated seafood by red tide can cause paralysis within 30 minutes in humans.

33. Rogue waves are very deadly and have sunk container ships, ocean liners, and tankers believed to be around 200metres in height for the past two decades. Since the occurrence is not common, measurement and analysis is still under observation.

34. Scientists believe they are over a million aquatic species that are yet to be discovered.

35. The challenger deep is the lowest known point of the ocean and its stands at a depth of 11,000 meters.

36. Sounds weird but Marine animals have cleaning stations. Major aquatic lives congregate to be cleaned by smaller shrimps or fish-like creatures by opening their mouth as a signal that they are ready to be cleaned. They remove parasites from their skins.

38. In 2012, a video of an oil rig in the Gulf of Mexico spotted a surreal creature at the depth of the ocean around 1,000-2000 meters called the Deepstaria Enigmatica.

39. Contrary to opinion, the Bermuda triangle isn’t a mystery as claimed by many with the supposed disappearance of ships and aircrafts happening outside the triangle. It’s only considered paranormal due to the work of popular culture.

40. Over 200million people live across coastlines.

43. Should all the salt in the ocean be removed and poured onto all the continents of the earth, it would astonishingly cover a jaw-dropping depth of over 500 feet.

44. People who often explore the sea and its mysterious act are usually called “Oceanauts”.

45. The fear of the sea or deep dark waters are called “Thalassophobia”.

46. The only man to swim across the Atlantic Ocean without a kickboard is called Benoite Lecomte in 1998. On average, he swam for eight hours daily for 73 days.

47. It would interest you to know that the main driver of the earth is the Ocean. It is responsible for the weather cycles we experience on earth.

48. Majority of sea plants and animals are Bioluminescent which simply means they produce light chemically within their bodies.

49. In the 16th and 17th centuries, the high seas had their own share of crime and violence by the Caribbean pirates.

50. It is fascinating to know that Marine biologists have discovered over 17,000 species living in the ocean depth without sunlight and are drawing energy from underwater thermal vents.

51. About 15% of quality proteins foods humans consume are from the ocean. Although, in areas where the seafood is higher in people’s diet, the percentage is believed to be more than 15%.

52. While the pacific ocean is the deepest, the Arctic is the shallowest.

53. Interestingly, ocean tides are usually caused by the gravitational interaction between the sun, moon, and earth.

54. An estimated three million jobs in the US are dependent on the ocean.

56. High intake of sea waters can be detrimental to humans due to the high concentration of sodium it contains.

57. A jaw-dropping 75 billion dollars is spent annually on ocean-seeking tourists.

58. It would interest you to know that the ocean contains a lot of gold enough for each person on earth. However, there is no feasible way of mining it.

59. Submarines have been in use since 1776 for military purposes to a great amount of success.

60. In the ancient 16th century, the famous French Pirate, L’Olonnais was known for terrorizing the Caribbean seas greatly such that he once cut out the heart of a suspected traitor and ate it.

61. Sea lions known as Selkies can surprisingly take human form according to some Scottish myths.

Do you find these ocean facts interesting? Leave a comment below and share if you like the content. Do you know that Dolphins mourn when a member of their group dies? Click here to uncover more Dolphins facts that will WOW you.