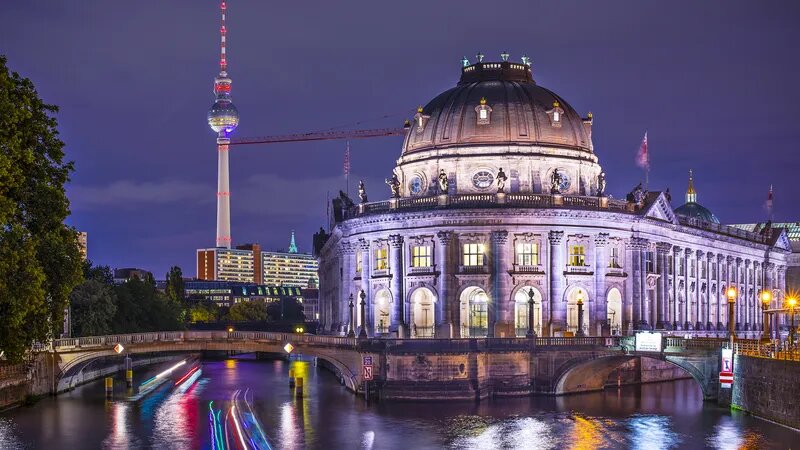 The German capital, Berlin stands tall to this day, regardless of its gruesome history and taunting past. The city maintains certain outstanding cultures and historical privileges which makes it unique from the rest of the cities in the world.

Should I start by telling you that Berlin is one of the few cities where smoking in public places is an offense, as smoking was banned in 2007? Or should I tell you about the 13,169 anonymous graves that abound in the city? Berlin has a multi-faceted status, and this ‘61 Fun Facts About Berlin’ is only a limited number of all the amazing things there is to know about the European city.

1. Let’s start from the beginning. 200,000 years ago, Berlin was a huge lake inhabited by a snail with the sweet name “Paludina diluviana Kunth”.

2. After World War II the city was divided; East Berlin was the capital of East Germany, while West Berlin became a de facto West German exclave, surrounded by the Berlin Wall.

3. After the German reunification in 1990, Berlin again became Germany’s capital.

4. The city of Berlin is very flat. The highest natural elevation is Müggelberg, which is only 114.7 meters high.

5. Berlin has always been the capital city of the Kingdom of Prussia, the Wilhelminian Empire, the Weimar Republic, the National Socialist regime, and of course Germany.

6. Berlin is nine times the size of Paris, which makes it one of the largest cities in Europe.

7. Berlin has over 180 kilometers of navigable waterways within city limits, which means that you can spend hours exploring the town by boat.

8. Berlin is the most multicultural city in Germany, constituting people from 190 countries. Over 7 million people in Berlin hold foreign passports.

9. Berlin is also one of Europe’s most visited cities. The largest visitor groups are from Germany, the United Kingdom, the Netherlands, Italy, Spain, and the United States.

10. The city is considered Germany’s greenest city with over 44% of its landmass covered in forestry, waterways, rivers, and green grass.

12. The Berlin TV Tower, which is 368 meters high, is the tallest structure in Germany.

13. Over 80,000 of the 3 million population of people in Berlin is Vegan. In fact, there are more than 50 restaurants, cafes, and ice cream parlors exclusively for vegans.

14. Berlin is a welcome abode for dog lovers. Currently, there are almost 150, 000 registered dogs in the city.

16. Every year, it costs Berlin a whooping sum of 35 million Euros to clean Graffiti designs on the walls of the city. But you know, Graffiti will always come back somehow!

17. Out of all the 3.7 million people that live in Berlin, only one in four Berliners are actually considered “real” Berliners (i.e. born and bred in the city).

18. The famous Brandenburg Gate in Berlin is considered Germany’s symbol of peace. It was commissioned by the Prussian king, Friedrich William II, in the 18th century.

19. Berlin is home to 3 UNESCO Heritage sites, which are the famous Museum Island, Sansoussi Palace, Parks in Potsdam, and the modernist housing estates.

20. Berlin is the largest Olympic training center in Germany and about 15% of all German top athletes live in the city.

21. Berlin will be home to the world’s largest universal museum, located on Museum Island. The project will connect four buildings on the island and is set to be ready in 2024.

22. The Berlin Wall (1961–1989) was a symbol of the Cold War in Germany that physically and ideologically divided Berlin into East Berlin and West Berlin.

24. The city of Berlin has 2100 bridges, more bridges than Venice. It is also said that the city has more waterways than Amsterdam, Stockholm, and Venice combined!

25. With over 6500 restaurants, 550 ice cream parlors, 2800 sandwich shops, 225 bars, clubs, and other food and drink venues, Berlin is surely one of the food and entertainment capitals of the world.

26. The oldest tree in Berlin is an English Oak tree, which can be found in the Tegel forest, and is as old as 900 years.

27. Speaking of being an entertainment capital of the world, Berlin hosts an average of 1500 events every single day!

28. There is an average of 106 rainy days in Berlin each year. So there’s lots of time to enjoy summer in the city.

29. Berlin has a very famous drinking culture, such that they brew their own indigenous beer, the ‘Berliner Weisse’. Each year, an average Berliner is said to drink 100 liters of beer!

30. In Berlin, inventing new road names rarely ever happens, so they just use the same one! In fact, over 5% of all road names in Berlin are duplicated 10-12 times.

31. Berlin is massive on public transport such that if you were to measure the total distance that the public transport system in Berlin travels each day, it would be equal to almost nine times around the world!

32. In Berlin, people are always coming and going. Approximately, 435 people move to Berlin each day, and only 327 people leave the city per day.

33. Berlin is very important, home to the oldest zoo in the world. With over 20,000 animals, there are almost 1,500 different species in the zoo.

34. Berlin is not the only place in the world that goes by the name ‘Berlin’. There are over 100 places in South Africa, USA, and Russia that bear the name Berlin.

35. The East Side Gallery in Berlin is the world’s largest open-air gallery. The most famous work to be seen there is “The kiss between Brezhnev and Honecker”.

36. Another fun fact, 40% of Berlin’s structures and lifestyle are found underground! These structures are twice as important as those appearing on the surface.

37. Tram tracks in Berlin make it easier for you to know you’re on the East side of the city. Trams were abolished in West Berlin after the reunification of Germany.

38. The largest frozen pizza factory in Europe is located in Berlin, and over 1 million pizzas are produced daily, some are even exported to Italy.

39. Berlin is a city of millionaires. It has 749 people who earn more than €1 million a year, and over 20,000 Berliners are millionaires, which is half as many as in Hamburg.

40. It is said that 1 out of 2 Berliners is single or at least unmarried. Berlin ranks only 20th among German cities with the most singles.

41. Nudism and FKK culture (Freikörperkultur = free body culture) are well represented in Berlin, especially in places like Tiergarten or at the Müggelsee lake.

42. The first man to be cured of AIDS was cured at the Charité University Hospital in Berlin, and he was known as “Berlin’s patient”.

43. Berlin has 175 museums, which include some very unusual ones like the cannabis museum, the museum of illusions and there’s even the museum of forgotten objects!

44. Berlin is home to 3 world-class, active and luxurious opera houses, which can accommodate over 4,400 opera attendees.

45. Trying to find long-term accommodation in Berlin is difficult, which is why you’d usually find close to 20 Berliners moving to a different neighborhood every hour.

46. Berlin is also home to stunning ancient castles, 9 of them in total. The main one is Schloss Charlottenburg, followed by Köpenicker Schloss and Schloss Schönhausen.

47. The people partying in the clubs in Berlin could literally fill a small town. Between 40,000 and 50,000 people dance every weekend in Berlin’s clubs.

48. The city of Berlin has a “gold ATM” that dispenses gold coins worth 250 grams.

49. The city of Berlin and most of Germany, take fare-dodging very seriously. You’d find that one in three prisoners in Berlin are fare-dodgers!

51. The Berlin dialect was particularly influenced by the Huguenots from the late 17th century. Some words in the dialect have French origins and some Hebrew.

52. Berlin’s oldest pub, Zur letzten Instanz, is almost 400 years old and still actively operating to date. It even once had Napoleon as a guest.

53. 24 restaurants in the city of Berlin have been awarded a total of 31 Michelin stars, putting Berlin ahead of Munich and Hamburg.

54. The Quadriga chariot on top of the Brandenburg Gate was once stolen by Napoleon and taken to France in celebration of his victory over Prussia.

55. Berlin’s second-highest elevation, the 120-meter-high Teufelsberg, is a composition of 26 million cubic meters of rubble that was heaped there after the war.

56. Berlin interestingly has approximately the same width as London and the same length as Naples in Italy.

57. Berlin is also home to world inventions like the modern computer, the thermos flask, and the torch.

58. In November 2014, four Germans set a Guinness World Record as they traveled to all 173 underground stations in Berlin, in just 7 hours, 33 minutes, and 15 seconds.

59. Berlin’s The Karneval der Kulturen (Carnival of Cultures), is a multi-ethnic street parade, that is usually celebrated every Pentecost weekend.

60. There is a memorial in Berlin known as ‘The Holocaust Memorial’ which is a tribute to the Jewish victims of the Holocaust. It was inaugurated on May 10, 2005, sixty years after the end of World War II