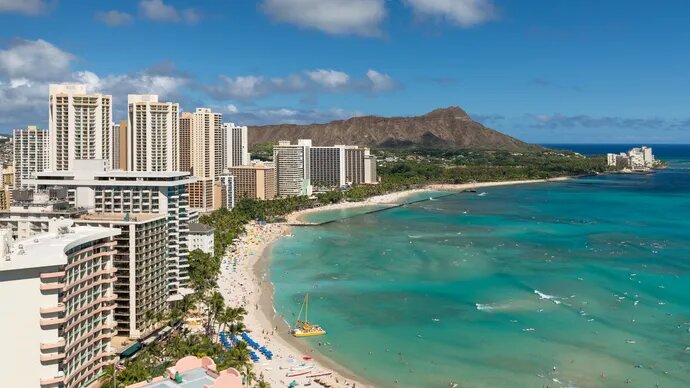 Fun and Interesting Facts About Hawaii

Light up your day with these collections of super interesting facts about Hawaii. Whether you are a tourist looking to discover things about Hawaii’s culture, history, landscape, etc or you are just interested in having more knowledge about this tourist city.

I am convinced that these facts some of which may be surprising to you will expose the important and fascinating details about this beautiful state. Do you know that there is actually a small part of Hawaii that belongs to the United Kingdom? Fasten your seat belt because it is going to be a fun exploration ride of the playground for the rich and famous.

2. The only royal palace in the United States is located in Hawaii and is known as the Iolani Palace which was built in 1882 by King David Kalakaua.

3. Despite the fact that Hawaii is mostly known for pineapples, it produces only about two percent of the world’s pineapple supply.

4. The largest dormant volcano in the world which is a crater of 7.5 miles by 2.5 miles is located in Hawaii and is known as Haleakala Crater.

5. Hawaii is the only state in the United States that grows coffee, vanilla beans, and cacao commercially because of its rich soil.

7. Despite the fact that people think that Hawaii is a state that is made up of a majorly tropical climate, it has 10 of the world’s 14 climate zones.

8. Hawaii is one of the only two states in the United States together with Utah that has made gambling an illegal business.

9. In some parts of Hawaii, they have very strange rules. For instance, no building on Kauai can be taller than a palm tree and the maximum speed limit is just 50 MPH.

10. In an advanced country like the United States, no one will be expecting a place not to be with a traffic light. But in Molokai, Hawaii, with a population lower than 15,000, they don’t have any traffic lights.

11. On the other hand, Hawaii has lost more wildlife species than any other state, as about 70% of the native birds are now extinct.

12. Mauna Kea (which is Hawaii’s tallest volcano) has pushed the Earth’s crust down an additional five miles because of its gigantic size and volume.

13. In order to prevent the growing extinction of birds and other smaller mammals in Hawaii, it is illegal to bring a snake into the state and you can face 3 years in jail or a $200,000 fine if you are caught.

14. Despite the fact that Hawaii is full of all kinds of amazing animals, like rabbits, deer, and dolphins, there are only two native Hawaii mammals.

15. Unlike some states in the United States like New York and Chicago, Hawaii was the first state to ban billboards in their city.

17. Hula (a religious dance in Hawaii) was originally only performed by men before women were allowed to learn the dance as well.

18. Although people associate Hawaii with the fragrant plumeria flower, it is the Yellow Hibiscus that is the Hawaiian state flower.

19. After the death of King Kalakaua, the last monarch that ruled over Hawaii was Queen Liliʻuokalani in 1891.

20. Among all the states in the United States, Hawaii has the longest life expectancy at 81.15 years in the year 2020.

21. Hawaii is one of the few states in the world that have its own time zones, and there is known as Hawaiian Standard Time which is 2-3 hours behind Pacific Standard Time.

22. Hawaii has 2 official state sports which include surfing and outrigger canoe paddling.

23. The Dole Plantation is home to the world’s largest pineapple maze located in Hawaii and is a huge tourist attraction.

24. The first recorded European in Hawaii, Captain Cook died on the island after a clash with native Hawaiians which led to him being shot and drowned.

25. Hawaii is the only state in the United States to honor a monarch on June 11 which is known as King Kamehameha Day.

26. The Constitution of the Kingdom of Hawaii was signed in 1887 and was known as the Bayonet Constitution.

27. Surfing was invented in Hawaii. It doesn’t come as a surprise that the most famous surfer in the world is from the state of Duke Kahanamoku.

28. Hawaii has been making moves to protect the environment from pollution as it was the first U.S. state to ban plastic bags in 2015.

29. Some of the things happen in Hawaii as it is possible for one to mail a real through the post office coconut in this US state.

30. Hawaii has a lot of value for its culture and history and is the only state in the United States to have two official languages which include Hawaiian and English.

31. Hawaii has vog because of the volcanic ash from Kilauea on the Big Island and this leads to some really gorgeous sunsets in the state.

32. It is one of the traditions and culture of Hawaiians to always remove shoes before entering someone’s home to show respect.

33. The Hawaii state fish has a very long and weird name and is known as the Humuhumunukunukuāpuaʻa which means triggerfish in English.

35. The third largest protected area in the world and the largest in the United States of America is Papahānaumokuākea Marine National Monument in Hawaii.

37. Tourism creates the most jobs in Hawaii and tourists inject over 11 billion dollars in spending into the economy.

38. Each of the islands in Hawaii is represented by a distinct official flower and color.

39. Hawaii is nicknamed Aloha State because of its famous Aloha lifestyle, Aloha shirts, hula, and luau.

40. In the past, the Hawaiian Islands were once known as the Sandwich Islands and this was after Captain Cook named the islands in honor of John Montague.

41. Hawaii is the most geographically isolated population center on Earth and is the southernmost state in the United States.

42. Hawaii serves as a strategic transportation center and global defense system of the United States and was the location of the Pearl Harbor attack.

43. Hawaii does not have a straight line in its state boundary and is the only state in the United States that is totally surrounded by water.

44. Hawaii is always getting larger and this is because of the active volcanoes and eruptions on the Big Island.

45. When measured from seafloor to summit, the tallest mountain in the world is located in Hawaii and is known as Mauna Kea.

46. The biggest volcano on Earth can be found in Hawaii, known as Mauna Loa and it makes up over 50% of Hawaiʻi Island.

47. Hawaii has beaches in 4 shades of sand and unlike many cities or countries, all Hawaii beaches except government-owned are public beaches.

48. Kilauea which is located in Hawaii is responsible for the deadliest volcanic eruption killing more than 5,000 people in the United States in 1790.

49. All the Hawaiian Islands make up the largest archipelago and longest island chain on earth.

50. The first documented contact by a westerner in Hawaii was during the arrival of British James Cook in 1178.

51. Hawaii is one of the few states in the United States to have once been an independent nation as it was an internationally recognized kingdom in 1810.

52. Hawaii is a popular filming location for Hollywood blockbusters such as Jurassic World, Pirates of the Caribbean, Outbreak, and Jurassic Park.

54. NASA astronauts trained for moon voyages on Hawaii’s Mauna Loa (one of the world’s largest volcanoes) in the 1960s.

58. There is actually a small part of Hawaii that belongs to the United Kingdom. This piece of land at Kealakekua Bay was used for the purpose of building a monument in memory of James Cook.

59. Hawaii is the only state in the United States that is made up entirely of islands and the highest sea cliffs on the planet are located there.

60. Because of its beautiful landscape and its exotic food, more than six million tourists from different countries visit Hawaii every year.

61. The main imports of Hawaii are petroleum oils and automobiles and its biggest export is iron or steel scrap.