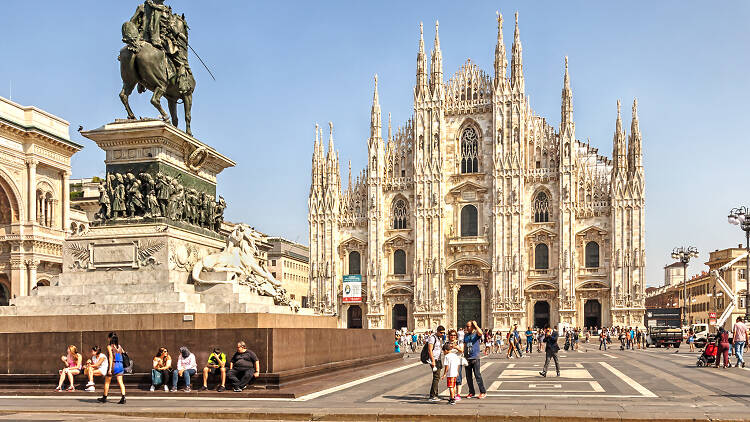 When you hear Milan, you think fashion. Right? But there is way more attached to Milan than just fashion. The north Italian city of Milan is the capital of Lombardy, Italy, and the second-most populous city in Italy after Rome. If you are interested in visiting Milan or you want to discover some of the fascinating things about Milan, then you are in the right place.

Did you know that the construction of the famous and enormous Milan Cathedral lasted for nearly 600 years? Yes, that’s a fact. And there’s more to know about this city of endowment! These 61 fun facts about Milan will definitely be worth your time.

1. Milan is home to the first skyscraper ever built in Italy, the Pirelli Tower.

2. Catholicism is the dominant religion in Milan, and the city is also home to the largest Orthodox community in Italy.

3. Milan has its own Catholic rite known as the ‘Ambrosian Rite’, which varies slightly from the Roman Catholic rite, used in all other western regions.

4. Milan City Day is celebrated on December 7, the commemoration day of Saint of Milan, Saint Ambrose.

5. Milan is one of the world’s top 20 Global cities, alongside Paris, New York, and London.

6. From barbarian invasions to take over by the Visigoths, to the coming of the Ostrogoths, the Romans, Germans, Charlemagne, and the Franks, Milan just couldn’t catch a break!

7. When the Romans conquered Milan, they named the city “Mediolanum”, which translates to “Mediterranean” in Latin.

8. Most famous Italian fashion brands, such as Valentino, Gucci, Versace, Prada, Armani, and Dolce & Gabbana, are headquartered in Milan.

9. Milan was one of the few European cities which was not richly affected by the bubonic plague in the XIV century.

10. One reason why Milan sustained minor losses from the plague was the fact that they would shut down any household that was infected, forcing people to stay inside and die.

11. Belloveso, the chief of the Celtic tribe that first settled in Milan is the founder of the city’s ancient symbol, a mythological animal in form of a half-woolen boar.

12. Although Milan became a huge production center in textiles and fabrics in the 19th century, Paris was a huge inspiration to the city in that regard.

13. In 1796, in the famous Milan’s Palazzo Serbelloni, Napoleon Bonaparte lived with his wife Josephine for 3 months.

15. Art works of one of the greatest artists of all time, Leonardo da Vinci are stored in the National Museum of Science and Technology, Milan.

16. The Milan tram network is the most developed in Western Europe.

17. During the Second World War, Milan was subjected to heavy bombing and was the most bombed city in the whole of Italy.

18. Milan’s tradition of an ‘Aperitivo’ is much more than a simple ‘Happy Hour’, as it is often called. It is a typical after-work meeting with free buffet service to a lot of people.

19. Restaurants, pubs, and clubs in Milan usually open by 7 pm in the evenings or even later, and as such, the aperitivos usually come in handy.

20. Teatro Alla Scala theatre in Milan is one of the largest and most famous Opera houses and ballet theatres in the world, and is also referred to as the opera capital of Europe.

21. It was since the1960s that Milan emerged as one of the ‘Fashion Capitals of the World’ but it officially took the name in 2009.

22. Milan’s fashion week show was established in 1958, and it is part of the global “Big Four fashion weeks” of the world.

23. Milan’s Cathedral, also known as the Duomo di Milano, is the second-largest Catholic cathedral in the world after Saint Peter’s Basilica in Rome.

24. Apparently, the Milan Cathedral has more statues than any other building in the world. There is a grand total of 3,400 statues, 135 gargoyles, and 700 figures.

25. The first stone of the Milan Cathedral was laid in 1386, and it was completed only in the 80-ies of the XIX century.

26. After conquering most of Italy, Napoleon created the Kingdom of Italy in 1805; Napoleon was crowned in the Milan Cathedral on May 26, 1805, as ‘King of Italy’.

27. Milan Cathedral stores a nail from the 3 nails used at the Crucifixion of Jesus Christ.

28. The holy nail is placed at a spot in the dome above the apse of the Cathedral and is marked by a small red light bulb.

29. Every year the holy nail is retrieved and exposed to the public for three days during a celebration known as the Rite of the Nivola.

31. Internazionale Milano, also known as Inter Milan, was once a part of AC Milan until they split away from the club in 1908.

32. Inter Milan took the name ‘Internazionale’ (International) because the founding members insisted on accepting all foreign players to their team, regardless of nationality.

33. Giorgio Muggiani was the painter who designed Inter Milan’s logo, with black and azure colors set on a background of stars, meaning, “we are brothers of the world.”

34. Inter Milan took its first ‘Scudetto’ (a championship) gold trophy in 1910 and it took the team 10 more years to win another championship.

35. One major event that affected Inter Milan’s next win after the Scudetto, was the sad death of the coach of the team, Virgilio Fossati who was killed in World War I.

36. Milan is also home to the largest stadium in Italy, the San Siro stadium, which is shared by the 2 football teams of the city and was host to the FIFA World cup in 1990.

37. The Milan Derby is actually a rival match between Inter Milan and AC Milan and is the only major derby in association football that is played at the same stadium, as both teams call San Siro “home”.

38. There is a strong English-speaking presence in Milan, but the local people will always appreciate visitors trying to speak Italian.

39. Milan is the least slow-paced city in Italy, unlike London or New York where slow walkers are practically knocked off the road by the stream of commuters hustling to work in the morning.

40. The Milan Conservatory was actually built on the premises of an ancient monastery. It was later renovated after the damage it endured from World War 2.

41. The Milan Conservatory, (Conservatorio Giusseppe Verdi) bears the name of one of the most successful opera composers in the world, Giuseppe Verdi.

42. A ‘grass to grace’ story is told about the rejection of Giuseppe from entering the Conservatory in 1833 as a result of his lack of musical talent. After he became successful, the conservatory changed its name to his own.

43. Milan is responsible for a dictionary addition of the word “milaner” meaning, fine wares and luxury apparel.

45. Milan is one of the most-visited tourist destinations in Europe, with more than 9 million visitors per year.

46. Milan has its own local culinary tradition, which uses more frequently rice than pasta, butter than vegetable oil, and features almost no tomato or fish.

47. Milan’s Sforza Castle built by Francesco Sforza, was one of the largest citadels in Europe in the 17th century and is present, home to most of Milan’s museums and art collections.

48. The Church of Santa Maria Della Grazie in Milan, holds the one major artifact of Italian polymath Leonardo da Vinci, the over 500 years old work of ‘The Last Supper.

50. Reservations are mandatory in order to see the glorious ‘Last Supper’ artwork, as only 25 visitors are allowed to view the masterpiece at a time.

51. The Arch of Peace in Milan, erected by Napoleon Bonaparte after his conquest of Northern Italy, was finished by the Austrians, as a mockery of Napoleon and France.

52. The horse statues at the top of the Arch of Peace were originally meant to be facing France, but the Austrians turned them 180 degrees to turn their back to France.

53. More than 20% of the population in Milan is made up of foreigners. Out of the 1,4 million people living in Milan, there are more than 260,000 foreigners.

55. Spanning an age of over 100 years, Milan’s Galleria Vittorio Emanuele II, a marvel of architecture, is the oldest shopping mall in Italy still in activity.

57. The secret as to why the King Vittorio Emanuele II statue on the main square of Milan, Piazza del Duomo is always clean, despite the hundreds of pigeons around, is due to the small electric current in the statue, that’s keeping the birds away!

58. Milan Cathedral has a large number of spires upon its roof, 135 in total, which is more than any other church in the world, and each spire is topped off by a sculpture of a biblical figure.

60. With a combined ten Champions League titles, Milan is only second to Madrid as the city with the most European Cups.

61. Milan owns 56 Michelin-starred restaurants and contributes to making Italy the second country in the world for the most Michelin restaurants.