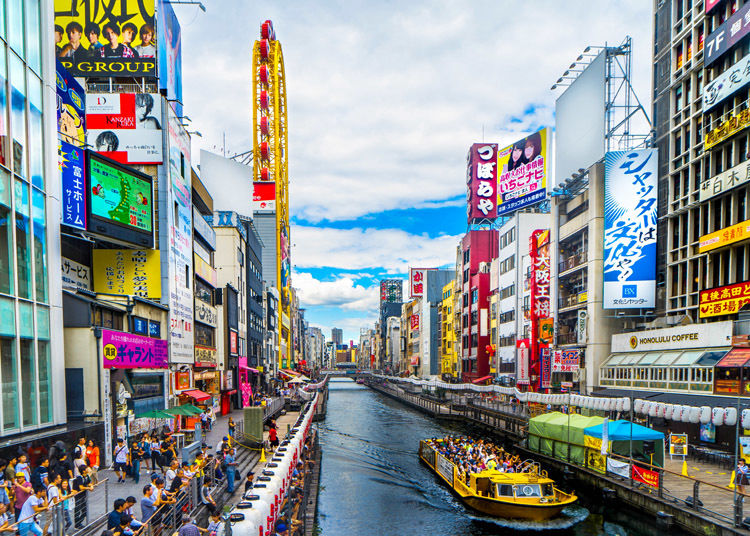 Ready to explore some fascinating facts about Osaka? We have compiled these interesting collections of facts about the culture, food, and drink, festivals, structures, history, and more. Before we start, let us give you some history of  Osaka.

Osaka is the capital city of Osaka Prefecture, in the Kansai region of Honshu in Japan. Full of unique places, one important thing that you shouldn’t miss about this city is that the people of Osaka (Osakans) are well known all over Japan for their friendliness and hospitality.

Do you know that people in Osaka are the fastest walkers in the world? Relax, as you are about the uncover some of the most interesting things about Osaka.

1. The name ‘Osaka’ translates to “large hill” or “large slope”. Mountains surround three sides of the Osaka prefecture and the west faces the arc-shaped Osaka Bay.

2. With a population of 2.7 million in the 2020 census, Osaka is the second-largest metropolitan area in Japan and the 10th largest urban area in the world.

3. Rennyo, Hideyoshi, Godai, and Seki, the founders of Osaka, are actually not natives of the city!

4. Although Osaka Prefecture is the 2nd smallest prefecture (in terms of area) in Japan, it has roughly 3,395 temples in total.

6. The city is the third most populous city in Japan, following Tokyo and Yokohama.

7. Osaka served as the capital of Japan during the Nara period when it was known as Naniwa.

8. The city is also called the ‘Manchester of Japan’ because it is a major Japanese textile center.

9. For no justifiable reason, Tokyo is Osaka’s biggest rival.

10. There are almost 1 million foreigners living in Osaka. The two largest groups of them are the Koreans and the Chinese.

11. A large number of Japanese history, culture, traditions, festivals, and legends, dating back to the 17-19th century, are still very well preserved in Osaka to date.

12. Osaka Aquarium Kaiyukan, was actually the world’s largest public aquarium when it first opened in 1990.

13. Almost all of Osaka’s historical monuments were destroyed in World War II bombing raids and thus, many of them lost their original outlook after they were rebuilt.

16. There is even the ‘Cup Noodle Museum’ in Osaka where you can make your own original cup noodles, with ingredients of your choice.

17. The Osakans are very huge on comedy and entertainment. In fact, a woman in Osaka turned comedy into a big business, the famous Ms. Sei Yoshimoto.

21. Osaka was host to the prestigious Expo ’70, the first World Fair ever held in an Asian country.

22. People in Osaka walk really fast. The average speed is 1.6 meters per second, which is the fastest in Japan as well as in the world.

23. In the Osaka dialect, the same syllable can be pronounced with different tones to create different meanings, unlike other Japanese dialects.

24. Just as is common in Nigeria, people in Osaka like to bargain when they buy.

25. Middle-aged women in Osaka carry lots of candies in their bags and usually give them to new people they meet.

26. Osakans love baseball so much that the game is almost a tradition.

27. One well-known truth in Japan is the strength of Osakan women, and for some reason, they often rank as some of the strongest wives in the country.

28. Osaka is also home to Olfa, the company that invented the cutter knife.

31. Osaka is also popularly referred to as the “nation’s kitchen” due to its importance as a center for rice trade in the 17th century.

32. Okonomiyaki, Osaka’s most famous dish, is a savory pancake whose filling is customized to your taste. ‘Okonomiyaki’ literally translates as ‘grilled stuff you like.’

33. Osaka Museum of Housing and Living is an open-air museum with detailed recreations of architecture in Osaka, as it has looked throughout history.

34. The Umeda Sky Building is one of the most recognizable landmarks in Osaka, is a magnificent architectural building of two 40-story towers interconnected by bridges.

35. The Umeda Sky Building has been mentioned as one of the Top 20 Buildings Around the World by THE TIMES magazine.

36. The first Universal Studios outside America was made in Osaka.

37. The Osaka Castle is one of Japan’s Three Most Famous Castles. It was erected in 1583 by Hideyoshi Toyotomi, the ruler who unified Japan.

38. The Castle has suffered a lot of physical hardship and has been repeatedly repaired. Its current shape dates back to 1931 when it was reconstructed.

39. Osaka’s Isshinji Temple is a Buddhist temple with thirteen images of Buddha in it, composed of the ashes of thousands of devotees. Odd right?

40. Tsutenkaku, also considered the symbol of Osaka, is a 103-meter tall observation tower that is a tribute to the rebirth of Japan following World War II.

41. The beautiful night view from the top of Tsutenkaku, has been chosen as one of the Top 100 Night Views of Japan.

42. The Billiken statue on the fifth floor in Osaka’s Tsutenkaku, is said to bring happiness if you rub the soles of his feet. Of course, lots of people would want to try.

44. From the many shopping centers, the multiple restaurants filled with varieties of Japanese cuisine, the Abeno Harukas Art Museum, and the building’s observation decks, Abeno Harukas offers so much fun indeed.

45. Osaka’s Bunraku Theatre in, is a famous puppet theater that features traditional Japanese performing arts, and was designated a UNESCO Intangible Cultural Heritage in 2008.

46. A single puppet in the Bunraku Theatre is controlled by three people, thus making its movements beautiful and delicate while expressing various emotions.

47. In Osaka, there are various festivals to honor the deities that are believed to still inhabit the temples in the city.

48. During the famous Tenjin Matsuri Festival in Osaka, shrines are built and carried through the streets in a parade of color and pageantry.

49. Dotonbori in Osaka, known for its unique and colorful large billboards, is a shopping district lined with restaurants and apparel stores and a major tourist site in the city.

50. Osaka’s Sumiyoshi Taisha Shrine is the head shrine of 2300 shrines located across the country. It is the most famous shrine in Japan, and is also considered a national treasure.

51. Osaka’s Namba Yasaka shrine is said to house the deity of guardianship and is considered one of the most unique shrines in the city due to its enormous lion head statue.

52. The Ohatsu Teijin is a 1300-year-old shrine, that is said to house the deity of relationships. Prayers offered at this holy place are for strong relationships.

53. The site of the Ohatsu Teijin shrine is purportedly the site of a tragic love story between the legends of Ohatsu and Tokubei, just as in the case of Romeo and Juliet.

54. The Maishama Pottery Museum, Osaka, built on a man-made island, features a wide range of pottery pieces and you are allowed to create your own pottery piece as well!

55. In Osaka, food is supposed to be a primary focus, one that is to be enjoyed. So even if it is a snack, eating while walking is a strict “No-No” in Osaka.

56. Good manners and good service are a cornerstone of the Japanese culture, which is one reason why one would definitely fall in love with the atmosphere in Osaka.

57. The Japanese people in the service industries are paid quite well, so tipping for service in Osaka is quite an insult to these gentle people.

58. When the Tempozan Ferris Wheel in Osaka opened to the public in 1997, it was the tallest Ferris wheel in the world at the time.

61. According to the Forbes list of The World’s Most Expensive Places To Live in 2009, Osaka was the second most expensive in the world after Tokyo. By 2020 it slipped to 5th rank.

Hope you enjoyed these interesting facts about Osaka. Please leave a comment below and share if you like the content. Check out 61 Interesting Japan Trivia Questions And Answers and 61 Interesting and Fun Facts About Tokyo.