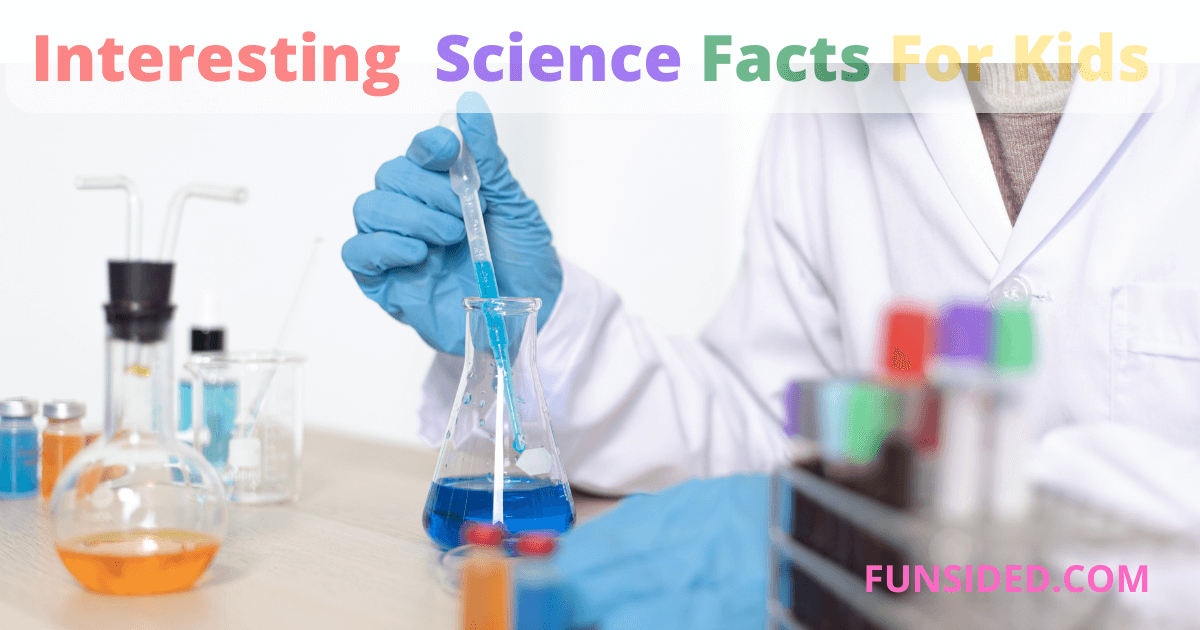 Entertain and educate your kids with these specially created Science Facts For Kids. These facts are created to be educating, surprising, interesting, and simple to understand by kids.

Do you know that it is scientifically possible to start a fire with a human fart since it contains methane and hydrogen sulfide? Your kids will certainly be happier, wiser, and more surprised after exploring these facts.

1. There are more bacteria than there are people in the world in the mouth of a human being.

2. If an artificial brain is created by scientists, it would need a million times more energy than it takes a real human brain.

3. If all the blood vessels that are located in the human body are put together, their length can reach up to 97,000 kilometers.

4. Electrical activity in the human brain can still go on for about 37 hours after death due to some chemical reactions that are still going on.

5. Indian doctors made use of live ants to stitch together the wounds of their patients in ancient times.

6. The human skin is renewed every 27 days and the majority of people throughout their lives change their skin around 1,000 times.

7. The human eyes become 100,000 times more sensitive to light after it has been made to be in the darkness for about an hour.

8. In the human digestive system, there are acids there that are strong enough to dissolve an iron nail completely.

9. The approximate number of times that an adult takes a breath each day is about 23,000 breaths a day.

11. Because of the fact that the hairs on the chin grow faster than any other hairs in the body, a man who hasn’t shaved in a lifetime can have a beard that is up to 9 meters.

12. Every second, the human body loses about 2.5 million blood cells, although it produces more than that at the same time.

13. If the eyelashes that a human being loses in a lifetime are combined together to form a chain, it can reach up to 30 meters.

14. Laughter helps humans to reduce their allergies. For instance, if a human is allergic to fever, laughing can reduce it.

15. Most human beings cannot hold their breath for more than one minute, but the world record for breath-holding is 7.5 minutes.

16. The probability of a woman giving birth to triplets is about one in every five hundred and twelve thousand (512,000).

17. If all the things that make up your DNA molecule are stretched, its length will exceed the distance from the Earth to the Moon.

18. The nails that are located on the finger of a human being grow about four times faster than the one that is on the feet.

19. If the distance that the human blood travels in a day is calculated in miles, it is approximately about 19,312 miles a day.

20. If the skeleton of a human body is buried in neutral-pH soil or sand, it can stay preserved for thousands of years.

21. The White coating that is seen on the tongue every morning are the cells that die off during the night.

22. The probability of getting infected due to bacteria is higher when you kiss your fellow human being than it is when you kiss a dog.

23. The time it can take a human being to die when there is an incidence of suffocation is just about four minutes.

24. Human beings need to conserve and make the most of the fertile lands, as it only makes up about 11 percent of the earth’s surface.

25. The urine that is excreted from the body of a cat glows when it is seen in the dark.

26. The thickness of the skin of a hippopotamus is about 3.5 centimeters, which is almost thick enough to be bulletproof.

27. There are some species of sharks that can detect the smell of a fish, even if you cut the fish into billion pieces.

28. The amount that insects consume from the total stock of food in the world is about ten percent (10%).

29. Because they do not have the backbone of the foot, it is correct to say that elephants are walking on their toes.

30. A cockroach has an insane ability as it can detect the motion of an object that is about two thousand times smaller in diameter than a hydrogen atom.

31. Mosquitoes are more attracted to people who have recently taken bananas than those who have not.

32. Without its head, a cockroach is able to live for more than one week after its head has been removed from its body. And it can only die due to hunger and nothing else.

33. When you cut an earthworm in half in a certain place, it will likely grow its tail and head back.

34. Out of the 35,000 species of spiders, only about 27 species of them are dangerous and can kill human beings.

35. Some Japanese scientists have been able to create transparent frogs to easily explore their internal organs without killing.

36. Raindrops are faster than they appear and fall at a speed of about eleven kilometers per hour.

37. When hot water is put into a refrigerator, it will freeze in a faster period of time than cold water.

38. Genetic engineering is able to combine the genes of various plants and animals to make another product.

39. Avalanches are much faster than we think and can reach speeds of up to 130 kilometers per hour in 5 seconds.

40. The earth is more of the definition of a melting pot as there are 10 million species of living beings in the world.

41. Despite the fact that 70 percent of the earth consists of water, it only makes up about 0.25% of the total mass of the planet.

42. The temperature of the earth’s core is hotter than the surface of the sun at seven thousand, five hundred (7,500) kelvin.

43. The reason why the earth has four seasons in a year is that the earth is tilted at an angle of 23 degrees.

44. Banana peels have almost no friction because the friction coefficient is at an almost nonexistent 0.07.

45. The human eye has a 576-megapixel resolution but we only see at about 150dpi as it is more compatible.

47. Feldspar is the most common mineral on Earth and makes up about 41 percent of the Earth’s crust.

48. A 2009 study proved it takes only about six minutes for human brain cells to react to alcohol.

49. Helium changes our voice because of its density and makes our voice sound over two times faster than usual.

50. Tooth enamel is the strongest part of the human body and is stronger than human bones.

52. People used to believe the Earth was the center of the universe until 1543 when Nicolaus Copernicus proposed another theory.

53. A 2016 study conducted in the United Kingdom shows that in a fast-food restaurant ice is often dirtier than toilet water.

54. Sweating is the biological function of the body to cool itself and even when you are swimming, you still sweat.

55. It is possible scientifically to die from drinking water, through water intoxication and hyponatremia.

56. The ocean contains 20 million pounds of gold, although there is no efficient method of retrieving it.

57. Due to the large scale of ice that is melting in Antarctica, it is affecting the gravity of the earth.

58. The fish with the most amount of protein content in tuna with about 29.91 grams of protein per 100 grams of dry-cooked fish.

59. The hardest metal on earth is not steel as many people think, rather it is tungsten.

60. According to social homophily, friends share more DNA than strangers.

61. It is scientifically possible to start a fire with a human fart since it contains methane and hydrogen sulfide.

Hope you enjoyed these Science Facts for kids? Please leave a comment and share it with your friends and family. Also, check out 89 Fun and Interesting Trivia Questions and Answers for Kids.