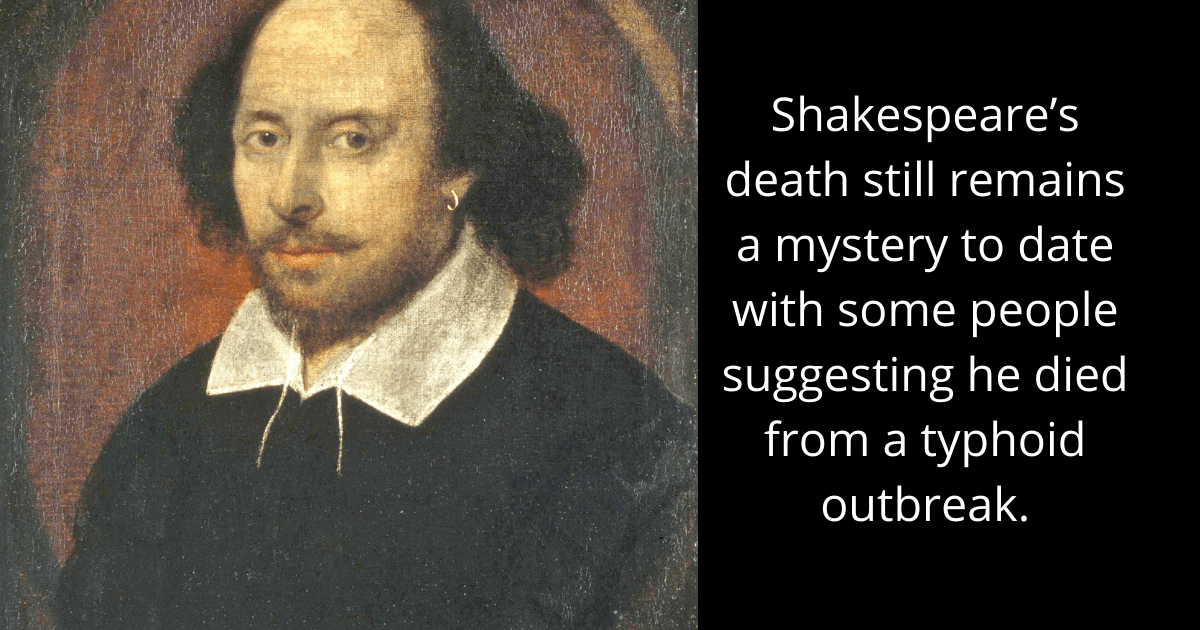 Arguably the greatest writer of all time in the world of Literature and English Language, William Shakespeare’s ingenious can never be overlooked nor underestimated. The article below depicts some unknown and fun facts about the famous playwright.

1. Interestingly, William Shakespeare’s exact date of birth is believed to be unknown but many suggest that the poet was born on the 23rd of April, 1564 going by the Julian Calendar.

2. Sounds weird but on the day he was born, it is believed a major plague broke out.

3. Strangely, his date of birth coincided with his date of death as he died on the 23rd of April 1616 which means he died at the age of 52.

4. Majority of his life history wasn’t documented as only a few of his legal and church documents could be seen easily.

5. Shakespeare’s father John was the official ale taster and inspector of bread, malt, and liquor.

6. His father was once the Mayor of Stratford in the late 15th century.

7. The mother of William Shakespeare is known as Mary Shakespeare of which her father was a wealthy and aristocratic farmer.

8. Shakespeare had a total of seven siblings.

9. A relative of Shakespeare known as William Arden was reportedly imprisoned and executed for plotting against Queen Elizabeth I.

11. Shockingly, Shakespeare doesn’t have any descendants as his only Grandchild Elizabeth died in 1670 without offspring.

12. He spent the majority of his life in London while his family resided in Stratford.

13. Between 1582 and 1592, Shakespeare experienced what is called the “Black Period” with many not knowing his whereabouts.

14. The famous poet once ran away from his hometown having reportedly poached a deer from the estate of a local politician.

15. Some critics often regarded Shakespeare as a fraud because they believe he was too smart and intelligent for someone who never went to college.

16. According to some theories put forward by historians, it is believed that some plays written by Shakespeare weren’t solely his as the majority were co-owned by various anonymous writers.

17. Interestingly, one-tenth of the Oxford Dictionary of Quotations was either written or spoken by Williams Shakespeare.

18. He was more of a Jacobean playwright than Elizabethan.

19. It is believed that Shakespeare was bisexual judging from his performances in his plays and sonnet.

20. Quite astonishing to know that William Shakespeare composed a staggering 154 sonnets during his lifetime.

21. Unlike most sonnets that are known to be about Love, Shakespeare’s sonnets were quite the opposite as most of his poems were more homoerotic, sad, and self-loathing.

22. Surprisingly, Shakespeare willed only a bed to his wife.

24. He also prides himself in boasting of the most memorable insulting words ever such as; “Thou clay-brained guts, thou knotty-pated fool, You Scullion, You rampallian! You fustilarian! I’ll tickle your catastrophe!”; Ugly and venomous.

26. Some commonly used phrases that we use now emanated from Shakespeare’s works such as; ‘be cruel to be kind’, ‘flesh and blood’, ‘tower of strength’, ‘foul play, ‘vanish into thin air.

27. The words frugal, assassination, barefaced, excellent, critical, and countless were all part of the amazing works from Shakespeare.

28. Thomas Thorpe surprisingly published Shakespeare’s sonnet on the 20th of May in 1609 without his permission. Guess copyright didn’t exist back then.

29. Shakespeare’s rumored lover was named Henry Wriothesley; a man to which the famous poet dedicated his works to.

30. Strangely, Shakespeare was buried in the same place he was baptized and also placed a curse on whosoever opened his tomb. The curse goes thus:

“Good friend, for Jesus’ sake forebear To Digg the dust enclosed heare; Bleste be the man that spares thes stones, And curst be he that moves my bones”.

31. Despite been Catholic was illegal back then in England, it is believed that Shakespeare’s family defied the odds.

32. His works consist of 38 plays and 2 long narrative poems.

33. He attended the King’s New School in Stratford for his primary school education.

34. A particular writer named Robert Greene once labeled Shakespeare as an “Upstart Crow”

35. Shakespeare’s plays were usually divided into three parts; Tragedy, Comedy, and History, and most of his plays always turned out to be successful.

36. His plays were so good they drew the royalty’s attention and often played in the royal courts for Queen Elizabeth I and James IV of Scotland.

38. Good works hardly go unnoticed as Shakespeare’s works are now been studied as a course in various schools and universities across the globe.

39. Aside been a poet, Shakespeare was a very successful businessman having formed a joint-stock company with his actors which made him a shareholder in the company’s profit and also got paid for every play written by him.

40. His home in Stratford was often called the New Place and it was the biggest house in his town back then.

41. Shakespeare’s family have a crest of their own with the Latin inscription “Non-Sans Droict”, or “Not without Right”.

42. The outbreak of a major plague in Europe between 1592 and 1594 reportedly played a huge role in Shakespeare’s writing of poetry.

43. Quite surprising to know that majority of writers during Shakespeare’s time opted to write during the day because candles were very expensive.

44. An average of 13 suicide were found in Shakespeare’s plays with the trio of Anthony & Cleopatra, Julius Caesar, and Romeo & Juliet all ending in suicide.

45. Shakespeare’s last play was believed to be written at the age of 49 years old and the play was titled “The Two Noble Kinsmen”.

46. Quite interesting to know that the existence of the starling bird in the US won’t have been possible without William Shakespeare having mentioned the species of birds in one of his works.

47. Ironically, both Abraham Lincoln and his killer John Wilkes Booth were great admirers of Shakespeare’s work.

48. Quite fascinating to know that Shakespeare’s name can be spelled in about 80 ways.

49. Majority of the moon around Planet Uranus such as Oberon, Juliet & Ariel were interestingly named after characters from Shakespeare’s play.

50. The Poet’s shortest play consisted of just 1,770 lines and was named “The Comedy of Errors”.

51. Shakespeare’s longest word ever used in one of his plays is called “Honorificabilitudinitatibus” which simply means “invincible glorious honorableness.

52. It is believed that both Shakespeare’s parents and children were surprisingly unlearned.

53. Shakespeare is often called the “Bard of Avon”.

54. It would intrigue you to know that majority of Shakespeare’s plays have been translated into every key language.

55. His longest play remains Hamlet which is believed to be about 4,042 lines long.

56. Shakespeare’s death still remains a mystery to date with some people suggesting he died from a typhoid outbreak.

58. According to his fellow playwrights, once the Bard Avon writes a play he never edits them.

59. Finding any of his manuscripts was almost impossible as they were written only for stage performances and not kept for future purposes.

60. Strangely, the famous poet and playwright died four weeks after writing his will.

61. His father had a serious financial challenge when he was at the age of 5 years after been accused of illegal money lending.