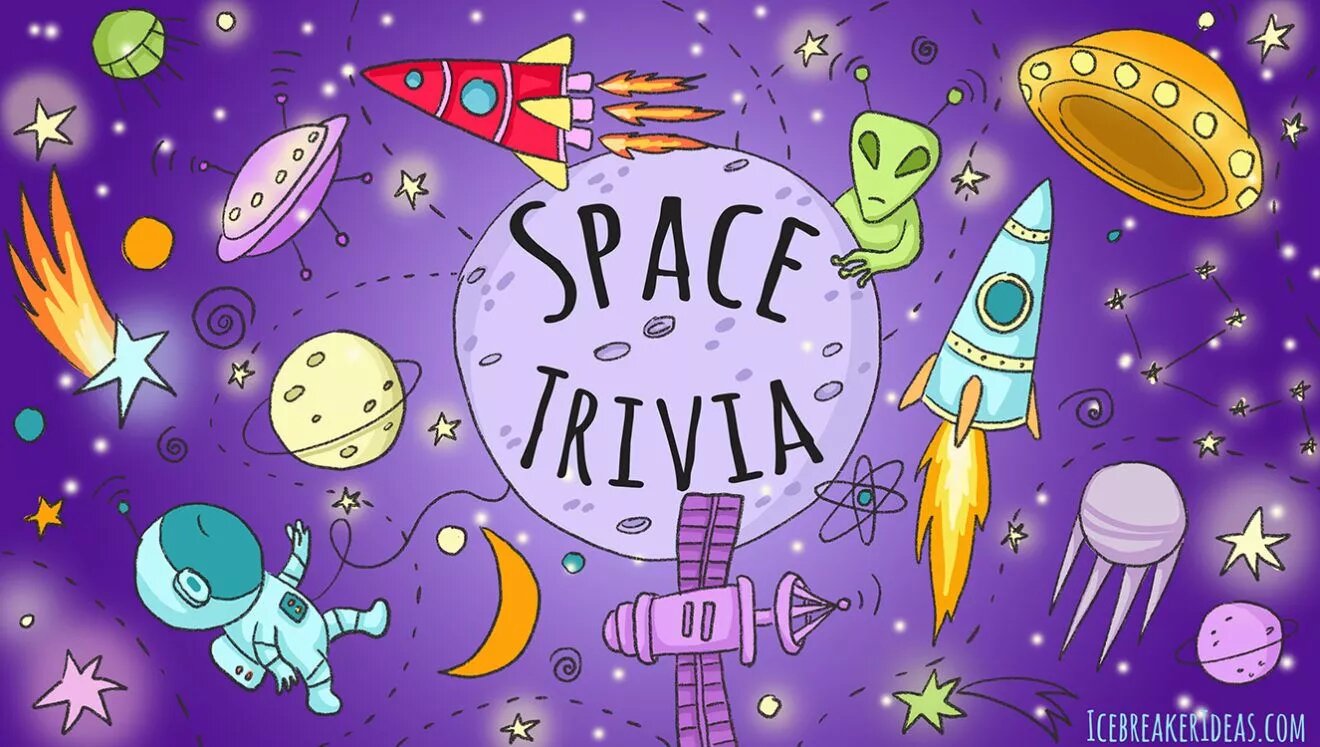 Entertain and educate your kids with these specially created space trivia questions. This trivia is created with a mixture of easy and hard trivia to keep the interest of the kid in the game till the end.

The questions are designed to be short and easy for kids to understand. Your kids will certainly be happier and wiser after playing this trivia game.

1. A planet that doesn’t have a defined orbital part is called?
Answer: Dwarf Planets

2. How many Dwarf planets do we currently have in our solar system?
Answer: 5

3. What is the name of the biggest dwarf planet recorded in our solar system?
Answer: pluto.

4. What is the name of the dwarf planets that do not have moons?
Answer: Ceres

5. Which dwarf planet is closest to the sun?
Answer: Ceres

6. Which dwarf planet is closest to earth?
Answer: Ceres

7. Which planet is closest to the sun?
Answer: Mercury

8. Apart from Mercury, which other planet does not have a moon on its surface?
Answer: Venus

9. How many times is Jupiter bigger than the earth by mass?
Answer: 318 times

12. An astronaut named Charles Duke once left what in space?
Answer: photos of his family

14. Alan Shepard was the first astronaut to play sports on the moon?
Answer: golf

15. Do astronauts grow taller or shorter in space?
Answer: taller. They can grow about 3% taller.

16. Why do astronauts attach themselves to something when they want to sleep in space?
Answer: to avoid floating around.

17. How many moons does Neptune have as its satellites?
Answer: 14

18. How many moons does Mars have as its satellite?
Answer: 2

19. Which planet in our solar system has the largest number of satellites around it?
Answer: Jupiter

20. Do quakes occur on the moon?
Answer: Yes

21. What distance does the moon drift away from the earth yearly
Answer: about 3.8 cm or 1.5 inches

23. How long does it take the light from the sun to reach the earth?
Answer: 8 Minutes

24. The sun has enough hydrogen on its surface to burn for another how many years?
Answer: 5 billion

27. The type of light that the sun emits that humans can see is called?
Answer: visible light?

28. At about what speed does the sun travel?
Answer: 220 kilometers per second.

29. Helioseismology is the study of which part of the Sun?
Answer: the interior part

30. Which country has launched more rockets into space than any other country in the world?
Answer: China

31. The force that is produced by the engine of a rocket is known as?
Answer: thrust

32. The first rocket that was launched into space in 1942 was built in which country?
Answer: Germany

35. The most distant human-made objects from the earth are?
Answer: Voyager 1 and 2

36. Astronomy was used to determine planting seasons in the past, true or false?
Answer: True.

37. The first person to explain the movement of the planets was?
Answer: Sir Isaac Newton

39. Debris in outer space is attracted to black holes because of which force?
Answer: gravity

40. The explosion of a star is?
Answer: supernova

41. The sun is heavier than the Black holes True or False?
Answer: False

43. Which year was the first asteroid was discovered?
Answer: 1801

44. The upper atmosphere destroyed most of the asteroids that are about to hit the earth, True or false?
Answer: true.

45. The smallest planet in the solar system is?
Answer: Mercury

46. What is the closest galaxy to our milky way?
Answer: Andromeda

47. How long does it take the light from the sun to reach Neptune?
Answer: 4 hours

48. Which planet in our solar system as astronauts made more missions to?
Answer: Mars

49. The second largest planet in the solar system is?
Answer: Saturn

50. Which planet has the highest mountain in the Solar System?
Answer: Mars

51. Which Planet is the brightest in our solar system?
Answer: Venus

52. Why don’t human footprints don’t disappear on the moon?
Answer: the lack of wind

53. What planet in our solar system is the only planet not named after a god?
Answer: Earth

54. What were the very first set of animals sent into space?
Answer: Fruit Flies

55. What is the coldest known object in our solar system?
Answer: Neptune’s moon called Triton

56. What is the name of the tallest mountain in our solar system that is located on Mars?
Answer: Olympus Mons

57. The distance light travels in one year is called?
Answer: Light year

58. Pluto is smaller in diameter than the whole of the United States, True or false.
Answer: True.

59. Name the biggest star in the universe.
Answer: UY Scuti

60. What color does sunset on Mars appears in?
Answer: Blue

61. What is the position of Mars planet from the sun?
Answer: 4th

Hope you enjoyed these trivia games with your kids? Please leave a comment and share it with your friends and family. Also, check out 89 Fun and Interesting Trivia Questions and Answers for Kids.