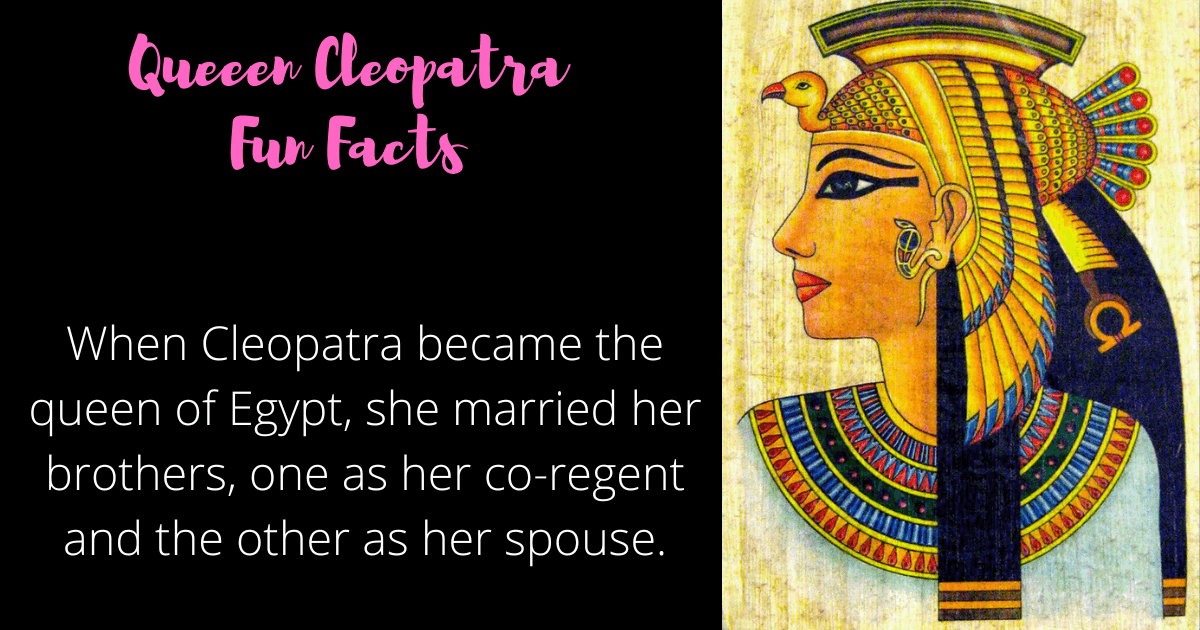 Cleopatra was an Egyptian queen that is considered as one of the most famous women that ever came from Egypt that was more known because of her beauty procedures and makeup and also her love affair with the Roman general, Julius Caesar. Do you know that one of the reasons why the Romans killed Caesar was that he built a statue for Queen Cleopatra in Rome? Stay curious as you are about to discover the most fascinating facts about Cleopatra that only a few people know about. 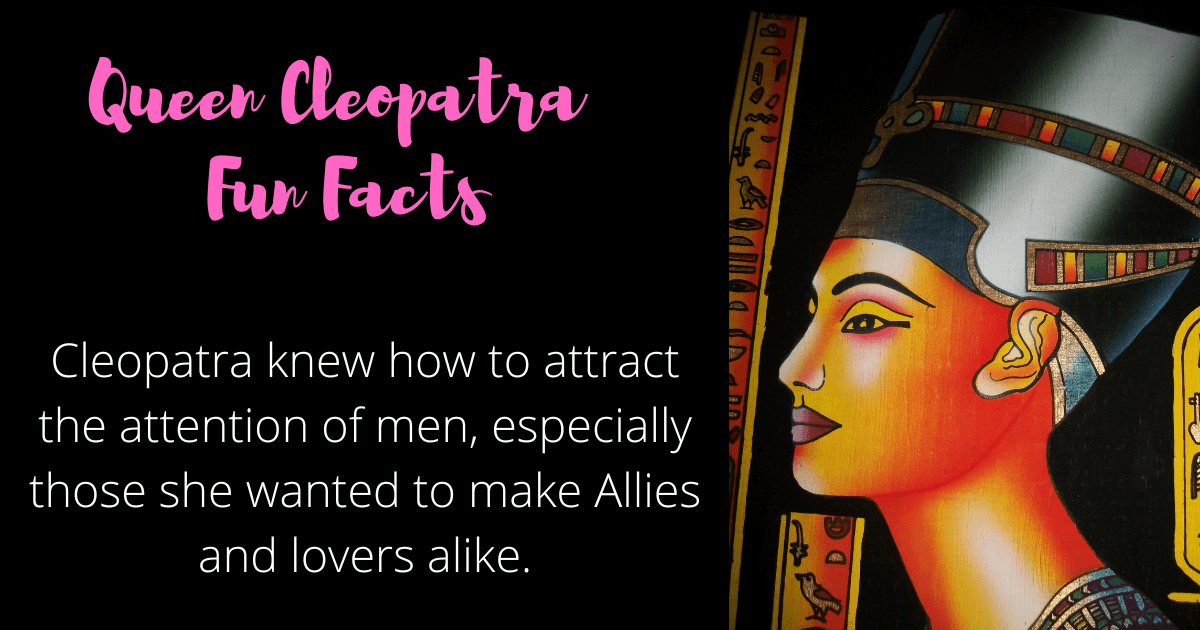 1. Cleopatra was said to have an active hand in the death of her three siblings.

2. When she became the queen of Egypt, she married her brothers, one as her co-regent and the other as her spouse.

3. Cleopatra was born 2491 years after the Great Pyramid of Giza was completed in 69 BC.

4. Cleopatra was not known to be conventionally beautiful, but she was intelligent and witty.

5. In 41 BC, she had her sister assassinated in the steps leading to the trample of Rome.

6. When power was handed over to her after her father’s death, Cleopatra didn’t want to share the power with anyone.

7. The duration of Cleopatra’s love affair with Julius Caesar was about 2 years and it produced a child named Caesarion.

8. Cleopatra took her life together with Mark Antony after a naval defeat on August 30 BC.

9. Many movies show Cleopatra as someone very beautiful, but that is not true.

10. In order to access Caesar’s quarters, she once wrapped herself in carpet in 48 BC.

11. It is said that Cleopatra was closer to the space race than she was when the building of the Pyramids was completed.

12. Together with her lover, Mark Antony, they established a drinking club, where they drank and feasted most of the time.

14. Cleopatra was the first ruler to learn the ancient Egyptian language.

15. By birth, Cleopatra is from Egypt. But she is actually a descendant of Macedonia Greek.

16. She conceived for Mark Anthony and gave birth to twins whom she named Alexander Helios and Cleopatra Selene.

17. According to their own wishes, Cleopatra and Antony were buried in the same grave.

18. Cleopatra was known to make use of any available natural beauty products to enhance her look.

19. Cleopatra made use of oils, which were natural to prevent her skin from wrinkling.

20. Making use of a bathtub filled with milk, this type of bathing was one of the most famous beauty procedures of Cleopatra.

21. The cat-eye that Cleopatra had was created using kohl.

22. The beauty procedures that Cleopatra made use of are so relevant that some of them are still used today.

23. She made use of the natural healing properties of the Dead Sea salts by rubbing them on her body.

24. Many beauty professionals consider this Egyptian queen as the queen of beauty innovation.

25. Because she believed in using scents to persuade people, she had a perfume factory.

27. Cleopatra looked masculine with her strong jawline and hooked nose.

28. Till today, many beauty firms sometimes convince customers to buy from them by telling them that Cleopatra made use of the product in her time.

29. Cleopatra made use of henna to polish her nails.

30. The specific combination she used while taking her bath in donkey milk, mixed with honey.

31. Cleopatra wasn’t slim, she was chubby and was a little bit short at 5 feet using today’s measurement.

32. The famous eyeliners that Cleopatra made use of were not to beautify herself, but for her health.

33. The type of khol she made use of at that time contained lead content which is considered beneficial to the body in small quantities.

34. One of the ingredients that made up the eye makeup that Cleopatra used was kohl.

35. She made use of red ochre that was ground with water to paint her lips and cheeks.

36. Cleopatra made use of rose water to keep her skin clear and soft.

37. She made use of almonds that are burnt to make her eyebrows darker.

38. Her fingernails were dyed by making use of henna, which gave it a reddish look.

39. Her famous eyeliner arrows that were black weren’t for beautification only, but also for health benefits.

40. Cleopatra’s makeup is often said by many researchers to be extravagant sometimes.

41. Cleopatra’s lower eyelids were green in color because of the green paste she used.

42. Because of the type of makeup she used, she was protected from diseases like conjunctivitis.

43. Cleopatra’s eyeshadow was blue in color because of the herbs she rubbed it.

44. In Cleopatra’s time, it was believed that if you wear makeup, you would be protected from god Ra and Horus from diseases.

45. Queen Cleopatra’s hairstyle and the type of jewelry she wore became a fashion trend even after her death.

46. One of the reasons why the Romans killed Caesar was that he built a statue for Queen Cleopatra in Rome.

Do you know that Caesar’s family claimed to be descended from the gods? Check out 61 Interesting Julius Caesar Facts

48. Queen Cleopatra was a product of incest as it was the norm at that time in royal families.

49. Cleopatra knew so many languages that most times she didn’t need a translator when talking with strangers.

50. Queen Cleopatra is considered the most educated queen that ever graced the throne of Egypt.

51. Cleopatra considered herself a goddess and took every possible action to keep that status.

53. Queen Cleopatra was the seventh woman in her dynasty to bear that name.

54. She was the last woman to grace the throne of Egypt.

55. Her reign in Egypt lasted for about 22 years and after her reign marked the domination of the Egyptian empire.

56. Cleopatra knew how to attract the attention of men, especially those she wanted to make Allies and lovers alike.

Cleopatra Facts About Her Childhood

57. The biological mother of Cleopatra is unknown with many theories to it, with many saying that her mother was Cleopatra V.

58. Philostratus was her teacher who taught her many languages such as Latin, Greek, Egyptian language, Hebrew, etc.

59. She was 10 years older than her immediate younger brother, whom she later married.

60. When Cleopatra was born, she was brought up in the palace of Alexandria in Egypt.

61. The father of this popular woman was a client ruler in the Roman Republic.