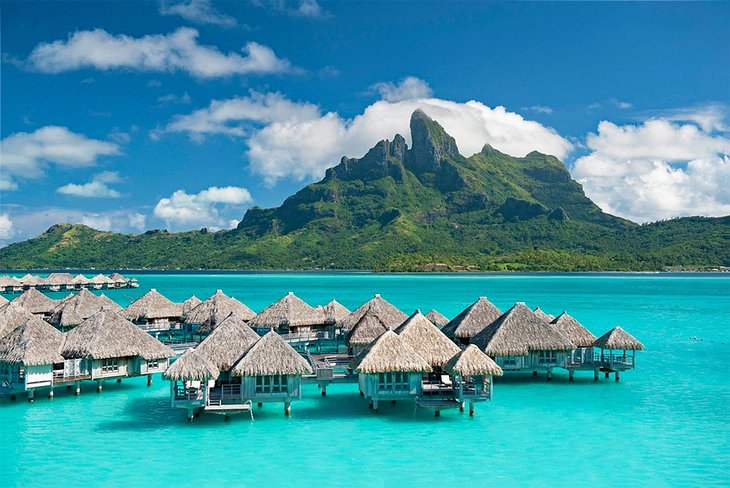 Bora Bora is an island group in the Leeward Islands that is part of the Society Islands of French Polynesia. Bora Bora has a total land area of 30.55 km2 and in the center of the island are the remnants of an extinct volcano. Do you know that flowers show the relationship status of people in Bora Bora? Continue reading to discover more interesting and surprising facts about this fascinating island city.

1. The original name of this city is Pora Pora which means, “created by the gods” in Tahitian.

2. The highest point of Bora Bora which is the tall and majestic Mount Otemanu is 727 meters high.

3. Because the city is surrounded by a ring of coral islets called Motus, Bora Bora is the most photographed isle in the South Pacific.

4. Matira Beach which is located in Bora Bora, with its soft white powdery sand, swaying palm trees, and crystal clear waters is one of the most beautiful beaches in the world.

5. Bora Bora is officially a semi-autonomous territory of France and they are working on their independence from the country.

6. Bora Bora was once a self-ruled kingdom that was protected from European colonization by its warriors until 1888.

8. Tourism is the main economic activity in Bora Bora and it is French Polynesia’s most popular island.

9. The official currency of Bora Bora is the French Pacific Franc and It is tied directly to the euro, at the rate of 119 CFP to one euro.

11. The beaches of Bora Bora are so safe that you are more likely to be injured by a falling coconut than a shark in Bora Bora.

12. With all its beauty, another thing that characterizes this island city is that there are no poisonous snakes or insects there.

13. Although the sharks in Bora Bora are not dangerous, there are more sharks than people in this city.

14. There are no mammals that are native to Bora Bora due to its volcanic past, but it is home to over 500 different species of marine wildlife.

15. Flowers show the relationship status of people in Bora Bora, a flower on the left ear of a woman shows that she is in a relationship while on the right ear means she is single.

16. The official flower of Bora Bora is the Tahitian gardenia and it was originally known as tiare mā’ohi.

17. Bora Bora is known for producing valuable and rare black pearls which can cost up to $45,000 when used to make jewelry.

20. The major settlement in Bora Bora is Vaitape, which is on the western side of the main island.

21. The coconuts on the beaches of Bora Bora have a very huge economic importance, as they are used for the production of copra.

22. The name of the last queen that the people of Bora Bora had was Teriimaevarua III.

23. The first European sighting of Bora Bora was made by Jakob Roggeveen in 1722.

24. The first church that was founded in Bora Bora was a protestant Church and was founded by The London Missionary Society in 1890.

25. One of the most famous tourist destinations in Bora Bora is the “Stingray Strait” which is an area of the lagoon where several species of stingrays are found in large schools.

26. Bora Bora was an independent kingdom until 1888 when queen Teriimaevarua III was abdicated.

27. A base, known as “Operation Bobcat” was set up by the United States in Bora Bora during World War 2.

28. Since the arrival of Christian missionaries in the 19th century, Christianity has been the dominant religion.

30. The best-preserved ceremonial site in Bora Bora is the Marae Fare Opu in Faʻanui Bay.

31. The most popular church in Bora Bora is the Saint-Pierre-Célestin Catholic Church which is located in the capital of the island.

32. The remains of 13 ceremonial platforms are among the numerous pre-Christian relics of the native Polynesians of Bora Bora.

33. Bora Bora’s economy is driven almost entirely by tourism and there are several five-star resorts and tourist attractions on the island.

34. The first overwater bungalows on stilts over the lagoon were built in Bora Bora in 1970.

35. More than 80 percent of the resorts in Bora Bora are overwater bungalows and this is now a standard feature.

36. There is no public transport in Bora Bora and this is why rental bicycles and cars are the recommended means of transport.

37. The easiest and most popular way of exploring Bora Bora is through the use of motorboats.

38. In addition to the existing islands of Bora Bora, another artificial one has been created and is known as Motu Marfo.

39. The most popular lagoon activities in Bora Bora are snorkeling and scuba diving.

40. The underwater world of the lagoon of Bora Bora is still intact and has not been exploited by humans.

41. During guided diving excursions, tourists are able to feed barracudas and sharks.

42. Bora Bora makes the list of the top ten romance and honeymoon destinations in the world.

44. The gross domestic product per capita of Bora Bora is about Seventeen thousand US dollars and its major industries are tourism and deep-sea commercial fishing.

45. The life expectancy of the people living in Bora Bora is quite high at 77.72 years.

46. In terms of size, Bora Bora is a tiny island, covering a territory of only 15 square miles.

47. Bora Bora has an extinct volcano that erupted over 3 to 4 million years ago.

48. The coral reef surrounding Bora Bora is considered one of the best coral reefs in the world.

49. Many of the temples that were built by the Pora Pora people in the past were destroyed by the English missionaries.

50. Throughout the American stay in Bora Bora during World War 2, there was no combat until it was closed in June 1946.

51. The majority of visitors to Bora Bora are American, Japanese, or European and they rarely get African visitors.

52. Travelers can enter Bora Bora for ninety days every six months without a visa depending on their nationality.

53. There are many young people living permanently in Bora Bora, as half of the population is under 20 years old.

54. Family and personal connections are very important in Bora Bora and it is common for several generations to live under the same roof.

55. There are no public cemeteries in Bora Bora and loved ones are buried in the family backyard.

56. The locals on Bora Bora are relatively poor because most of the investments in the island are foreign-owned resorts and businesses.

57. Tahitian , which is an official language of Bora Bora, is a relatively easy language to learn, with only 16 letters and 1,000 words.

58. The flag of Bora Bora is different from the two official flags of France and French Polynesia and consists of five horizontal stripes of alternating red and white color.

59. The main produce of Bora Bora are coconuts, copra, vanilla, and commercial fishing.

60. The biggest annual festivals in Bora Bora are the Heiva festival which takes place in July and the Hawaiki Nui Canoe Race.

61. The most expensive accommodation in Bora Bora is the Bora Bora one villa which costs about $55,000 per week.

Hope you enjoyed these Interesting facts About Bora Bora, leave a comment and share with friends and family. Do you know that the shortest flight in the world takes just 57 seconds to be completed?  Check out more 61 Surprising and Extraordinary World Facts.