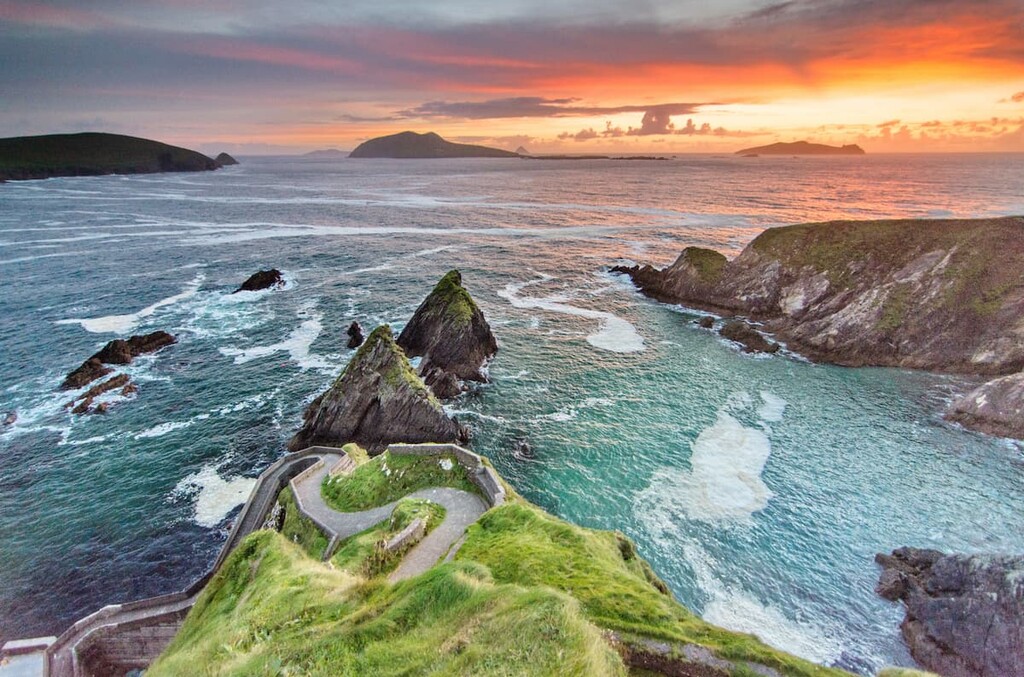 Interesting and Fun Facts about County Kerry in Ireland

Kerry is a county that is located in the peninsular southwest region of Ireland and is full of rugged terrains and mountains. Kerry has been dominating the economic, financial, sports, and tourism sector than some other counties in Ireland and is home to many archeological locations. Do you know that One of the oldest footprints in the world is found in County Kerry, Ireland? Read further to learn amazing facts you may not know about County Kerry.

1. Kerry has the world’s largest collection of All-Ireland winners medals.

2. For more than two thousand years, County Kerry has been known as “The Kingdom”.

3. The only festival in the world where a wild mountain goat is crowned king happens at County Kerry, at the Puck Fair.

4. The Butler Arms Hotel in Waterville has been owned by the same family for more than 130 years.

5. The famous movie star, Chaplin loved Kerry so much that a statue was erected in his honor.

6. The first recorded occurrence of a wild dolphin interacting positively with people in Ireland was that of Fungie, the Dingle Dolphin.

7. The tracks of Valentia Island are among the oldest signs of vertebrate life on land.

9. St. Brendan the Navigator, sixth-century monk was from County Kerry.

10. The famous actor Michael Fassbender moved to County Kerry when he was just two years old.

11. One of the oldest fairs in Ireland, the Puck Fair is held at Killorglin in County Kerry every August.

12. The annual Patrick O’Keeffe Festival in Castleisland is named after a local musician Padraig O’Keeffe.

13. One of the ways that tourists are drawn into County Kerry is through The Rose of Tralee International Festival.

14. One of the greatest Antarctic explorers, Tom Crean was from County Kerry.

15. Thatched House at Finuge Cross, near Listowel, is the oldest thatched house in Ireland and is over 300 years old.

16. One of the oldest footprints in the world is found in County Kerry, Ireland.

17. The”M” that James Bond has was inspired by a man from County Kerry called William Melville.

18. Skellig Michael was the island that was used for the newest Star Wars trilogy and this opened doors to tourism.

19. Christy Brown, who was able to write or type only with the toes of one foot, was from County Kerry.

21. The spot in Killarney at the top of Moll’s Gap is called Ladies View because it was where Queen Victoria’s ladies-in-waiting stopped to take in the view of the lakes below.

22. Daniel O’Connell, who is better known as ‘The Liberator’ was born in County Kerry.

23. Skellig Michael, one of the islands in County Kerry was made a UNESCO World Heritage Site in 1993.

25. Skellig Michael is the home of the second largest colony of gannets in the world with over 27,000 pairs.

26. Part of the Kenmare Lace that the women of Kerry produced in 1864 was given to Queen Victoria on her visits and another to Pope Leo XIII.

27. The Charlie Chaplin Comedy Film Festival was set up in 2011 to celebrate the actor.

28. The motto of the county of Kerry means Co-operation, Help, Friendship to show how friendly Kerry is.

32. County Kerry is the fifth-largest county among the thirty-two counties in Ireland.

33. In terms of population, County Kerry is the 15th-largest population among the 32 counties in Ireland.

34. County Kerry shares a border with County Limerick to the east and County Cork to the south-east.

36. One of Ireland’s most famous tourist destinations, the Catholic diocesan seat is located in County Kerry.

37. There are nine historic baronies in Kerry, although they don’t serve any administrative purposes.

38. Strawberry trees which are not normally found in Northern Europe are found in Kerry because of their climate.

39. County Kerry is one of the areas in Ireland with the highest rainfall because of its mountainous area.

41. In 1986, County Kerry experienced the remnants of Hurricane Charley which led to extensive rainfall, flooding and damage.

42. The Siamsa Tíre center in Tralee is known for its traditional Irish pastimes.

43. The part of Kerry that is known for its rich literary heritage is the Blasket Islands off the Dingle Peninsula.

44. Increasingly extreme weather conditions made the Basket Islands uninhabitable in 1953.

47. The Sam Maguire Cup has been won by Kerry’s football team 37 times.

48. The Atlantic coastline of County Kerry is almost about 1,000 kilometers long.

49. The main competition for association football in the county is called the Kerry District League.

50. The official team of Kerry’s cricket team plays their home games at Oyster Oval near Tralee.

51. The center of Ireland tourism is located in County Kerry and precisely at Killarney.

52. The Mesolithic period is the period that human settlement dates back to County Kerry.

53. Artistic taste of County Kerry is concentrated on open-air Atlantic rock art, which dates back to the Early Bronze Age period.

54. There is an abundance of archaeological sites in County Kerry and Rock arts scattered all over the county.

55. The commercial radio station of the county, Kerry radio was established in 1990.

56. The Kerryman and Kerry’s Eye are the two local newspapers of County Kerry.

57. In County Kerry, there is a developing greenway network across the county.

58. The official airport of County Kerry is located at Farranfore in the center of the county.

59. The Harbour of County Kerry is capable of handling ships of up to 17,000 tonnes.

60. The University Hospital Kerry is the second-largest acute hospital in the Health Service Executive South Region.

61. The Institute of Technology, Tralee, is the main third-level institution in the county.