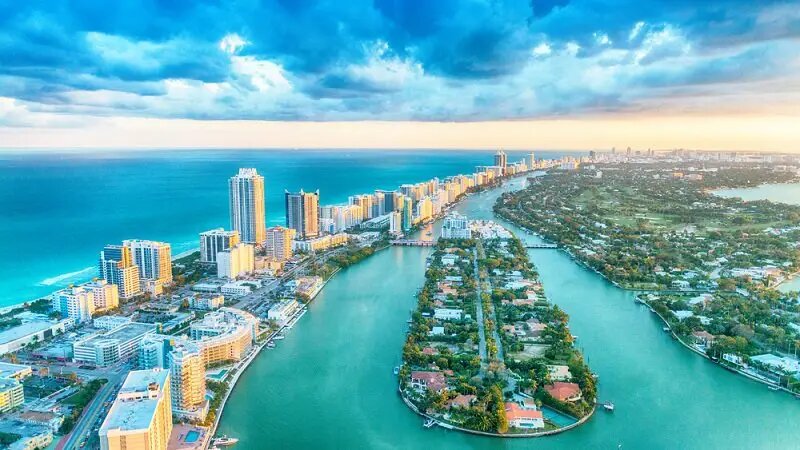 61 Interesting And Fun Facts About Miami

Light up your day with these collections of super interesting facts about the City of Miami. Whether you are a tourist looking to discover things about Miami’s culture, history, landscape, etc or you are just interested in having more knowledge about this tourist city,  I am convinced that these facts some of which may be surprising to you will expose the important and fascinating details about this Magic city. Fasten your seat belt because it is going to be a fun Miami exploration ride.

1. Before Miami developed into one of the world’s best cities, the city was a spot for pirates such as Blackbeard, Gasparilla, and Jean Lafitte.

2. Miami has a very tight relationship with Latin America and this is why more than Seventy percent of its population are Latino/Hispanic.

3. Despite the fact that the official language of Miami is English, the most popular language is Spanish as more than 60% of the population speak it.

4. You have to master a good number of languages if you want to work in or live in Miami as it is one of the hardest places to work or do business in the U.S. without knowing a foreign language.

5. Despite how big the Miami city and its metropolitan area might be, it received the Forbes award “America’s Cleanest City” in 2008.

6. After New York and Chicago, according to Architecture and Design Almanac, Miami boasts the third most impressive view in the United States.

7. According to the tourist data from the city, Miami’s most frequent visitors were international tourists from South America, including Brazil, Argentina, and Colombia.

8. Because of its beautiful scenery and cityscape, The Magic City welcomed a mind-blowing 23.3 million people in 2018 who ended up spending more than $18 billion.

9. Because of the fact that the whole state of Florida is in the hurricane belt, natural disasters are not far from Miami, but this does not stop people from visiting and living there.

10. One of the reasons Miami is desirable is because of its weather as this city is the warmest location in the United States during winter.

11. With close to 250 days of sunshine, it is no surprise that Miami is the city that invented sunscreen through Benjamin Green, a pharmacist from Miami Beach, in 1944.

12. Miami is the only city in the United States bounded by two national parks which are Everglades National Park and the Biscayne National Park.

13. In the United States, Miami is considered the true divers’ paradise because of its Emerald, crystal-clear waters, and of course sunken ships.

14. Miami is dubbed The Wreckreational Diving Capital of the World because there are over 50 different underwater wreck sites for divers to explore on the beach.

15. Miami’s name has tribal origins and was derived from the people who lived there before known as the Mayaimi. The Mayaimi lived on the territory of modern Miami in the 16th and 17th centuries.

17. Miami has the largest port on the East Coast of the United States and this is why it is known as The Gateway to the Americas and the Cruise Capital of the World.

18. A drug conflict known as the Miami Drug War which happened in the 1970s and 1980s made the city to be known as The Drug Capital of the World.

19. It is said that the chances of a white Christmas in Miami are slimmer than seeing Trump jogging in a bikini because Miami has seen snow once in its official meteorological history in 1977.

20. Because of its fantastic white-sand beaches, Miami Beach hosts one of the biggest skiing clubs in the United States.

21. There is a man known as Robert Kraft that has been running eight miles every day on Miami Beach since 1975 and even the Covid-19 lockdown did not stop him from doing this.

22. The Miami International Airport (MIA) contributes very well to the city’s economy as it provides 25 percent of all local jobs.

23. In the United States, Miami International Airport (MIA) ranks first in handling cargo and takes the second spot in terms of international passengers.

24. Forty percent of all Bahamians that live in the United States reside in Coconut Grove in Miami.

25. Hotels, restaurants, and recreational facilities also employ a lot of the workforce in Miami as they employ another 10% of Miami’s workforce.

26. The most authentic dish in Miami known as the Cuban sandwich is served by the world-famous Versailles.

27. You may not likely see a basement in Miami because if you start digging into the ground, you’ll find water everywhere as the land is just about 6 to 9 feet above sea level.

28. According to the poll organized by automobile club Auto Vantage, Miami has one of the rudest drivers in the United States.

29. Despite the fact that this is one of the world’s richest cities, they take part in their culture. It is well known for its ballet company and ballet and symphony orchestra use the Miami-Dade County Auditorium where visiting artists from the U.S. and abroad perform.

30. Miami River bisects this popular city into two and this is what influenced one of its nicknames, “The Big Water”.

31. Miami is the only large city in the United States that was founded by a woman. Julia Tuttle, a local businesswoman, is regarded as the founder of the city.

32. Miami Beach’s island is one of the few artificial beaches in the United States and was made from a deserted coconut grove plantation.

33. Miami Beach is home to the largest Art Deco architecture in the world and more than 800 Art Deco buildings are on the beach.

34. Telemundo and UniMás are headquartered in Miami and in 2011, about 85 percent of Telemundo’s original programming was filmed in the city.

36. Miami is one of the places you can stay at some of the world’s best hotels including the iconic Fontainebleau Miami Beach.

37. A lot of people visit Miami on a daily basis and this is why it is not a surprise that the number of different languages spoken on Miami Beach is over 60.

39. Miami is considered as cosmopolitan as Amsterdam and Brussels because there’s a high chance you’ll encounter someone who is the same ethnicity or speaks the same mother tongue as you do since more than 150 ethnicities visit the city every day.

40. There is a 1920s Venetian Pool that features an island, grottoes, a rock quarry, and two waterfalls in Coral Gables which is the largest freshwater pool in the United States.

42. Miami is becoming more vulnerable to natural disasters because locals have to frequently replenish its beaches with new sand since it is man-made.

43. There is a street in Miami known as Little Haiti that was formerly called Lemon City because of the unusually sweet lemon trees that grew there.

44. The largest Hispanic festival in the United States known as Ocho which is translated to “The Eighth Street” is hosted by Little Havana.

45. Little Haiti is as quirky as the Caribbean, as you can imagine as it’s home to over 30,000 exiles and artists.

46. Coral Gables in Miami hosts a World War II hospital which is now a 5-star, opulent hotel in the city.

47. The oldest continually inhabited district in Miami is the Coconut Grove whose neighborhood traces its roots back to 1873 when Bahamians established it.

48. The world’s most famous Cuban restaurant is not in Cuba but it’s in the Sunshine City known as Versailles.

49. plays host to the South Beach Wine & Food Festival which is a five-day festival where food and drinks are served for five days straight.

50. The most typical dessert in Miami and in the whole state of Florida is the sweet, creamy, and crunchy Key Lime Pie.

51. Miami plays host to Burger King’s headquarters and the first Burger King restaurant opened its doors in the city in 1954.

53. Miami was classified as a Beta + level global city by the GaWC (Globalization and World Cities Research Network) in 2020 because of the radical developments that can be found in the city.

54. According to a 2018 UBS study of 77 world cities, Miami is the second-richest city in the United States in terms of purchasing power and the third in the world.

55. In the United States, Brickell Avenue, which is located in Miami, has the largest concentration of international banks.

56. Despite the economic development of Miami, between 2015 and 2019, Miami lacked in terms of owner-occupied housing, computer, and internet usage.

58. Because of the fact that Miami is a major television production center, it is considered to be the most important city in the United States for Spanish language media.

59. Since the Florida land boom of the 1920s, Miami witnessed its largest real estate boom during the mid-2000s.

60. Miami is a significant music recording center in the United States and this is why the headquarters of Sony Music Latin is located there.

61. Miami is also characterized by high-rise buildings and currently has the seven tallest skyscrapers in the state of Florida.

Hope you enjoyed the ride, please tell us your view in the comment section below. What to know more about tourist cities? Check out 61 Interesting Facts about Casablanca