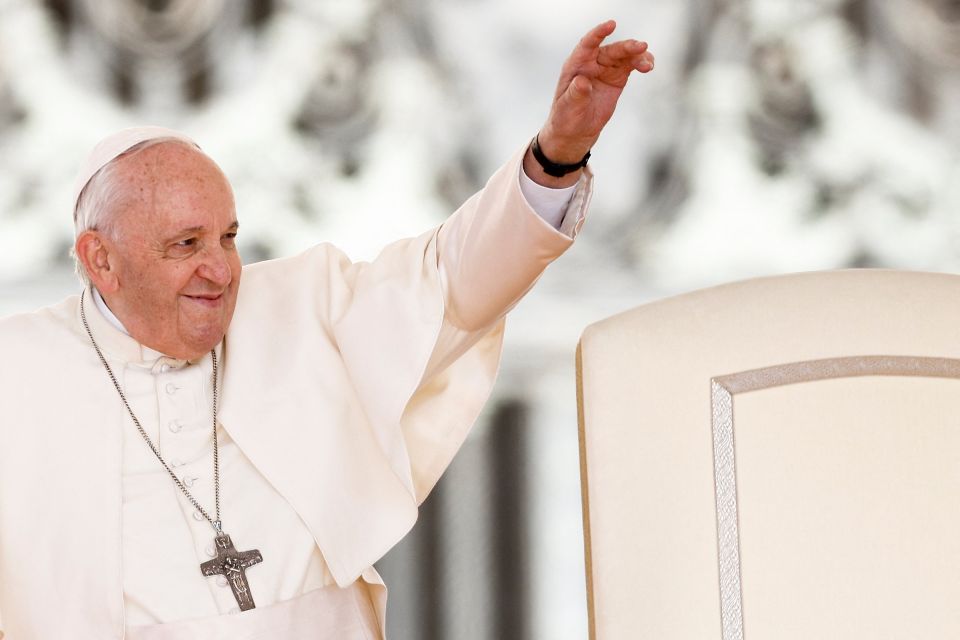 Pope Francis greets the crowd during his general audience in St. Peter's Square at the Vatican April 27. (CNS). Photo: ncronline.org

Pope Francis, whose real name is Jorge Mario Bergoglio, was born in December 1936. He was elected the head of the Catholic Church and sovereign of the Vatican City State in 2013. Pope Francis is the first pope to be a member of the Society of Jesus and the first from South America. Do you know that Pope Francis worked as a bouncer in a bar in his hometown? Continue reading to discover more interesting facts about Pope Francis.

1. Pope Francis was born in Bueno Aires, Argentina, and first became a priest in 1969 but did not become Pope until 2013.

2. Pope Francis is the only Pope in Catholic history that has had the name Francis, and he is also the first Jesuit to be elected as Pope.

3. Apart from being known as Pope Francis, his real name is Jorge Mario Bergoglio.

4. Pope Francis chose the name Francis in honor of St. Francis of Assisi, a Catholic friar who was born during the 12th century in Italy.

5. Before he became a priest, Pope Francis used to enjoy dancing the tango with his then-girlfriend.

6. Apart from studying theology, Pope Francis actually studied for a Master’s Degree in Chemistry and even taught in high schools.

7. Before working in the Lord’s vineyard, Pope Francis worked as a bouncer in a bar in his hometown.

8. Pope Francis is a big fan of cooking, and it has been rumored that one of his specialty dishes is paella.

9. When he was in his teenage years, one of Pope Francis’ lungs was removed.

10. When his predecessor, Pope Benedict XVI won the election in 2005, Pope Francis was a runner-up.

11. Pope Francis visited AIDS patients, going so far as to wash and kiss their feet in 2001.

12. Pope Francis isn’t one of those traditional Popes, as he tweets to over 7 million Twitter followers on a regular basis.

14. In 2013, Forbes ranked Pope Francis as the fourth most powerful person in the world.

15. Pope Francis is a big football fan as he still supports the San Lorenzo football team from his hometown in Argentina.

16. Pope Francis doesn’t read the bible only, he has read The Lord of the Rings and various other books by J. R. R. Tolkien.

17. Pope Francis is currently a citizen of three different countries; Argentina, Italy, and because of his status, the Vatican.

18. Pope Francis prefers to live in a small guest house in the Vatican, rather than the traditional apartments made for Popes.

19. Pope Francis was named Time’s ‘Person of the Year’ in 2013 because of the influence that he had already had in such a short time.

20. Pope Francis once sold a Harley-Davidson motorcycle that was gifted to him and gave the proceeds to the homeless.

21. Pope Francis was inspired to join the Society of Jesus (the Jesuits) in 1958 after recovering from an illness.

22. Pope Francis became the archbishop of Buenos Aires in 1998 and it was Pope John Paul II that made him a cardinal.

23. Pope Francis became the first pope to write an op-ed for The New York Times on the 26th of November, 2020.

25. In December 2016, Pope Francis again made Forbes’s list of “The World’s Most Powerful People” and he was placed as the fifth person.

26. In March 2013, a new song titled Come Puoi, was dedicated to Francis and released in Portuguese, and Italian languages.

27. Pope Francis abolished the €25,000 annual bonus that his predecessors paid to the cardinals serving on the Board of Supervisors for the Vatican bank.

28. Pope Francis is known for wearing the same iron pectoral cross that he had worn as archbishop of Buenos Aires, instead of the gold one worn by his predecessors.

29. On 14 September 2014, Pope Francis presided over his first joint public wedding ceremony in a Nuptial Mass for 20 couples in Rome.

31. Although Pope Francis is said to be non-European, his father and both of his mother’s parents are from northern Italy.

32. Pope Francis once described the pros and cons of social media during a conference on the World Day of Social Communications in 2019.

33. The cave under the Church of the Nativity caught fire the night after Pope Francis’ visit to Israel in 2014.

34. Pope Francis was once rumored that a possible resignation arose due to health issues but he denied such in September 2021.

35. Because Pope Francis requested that all Catholics be kind to animals, he was awarded the “Person of the Year” by People for the Ethical Treatment of Animals in 2015.

36. Pope Francis caused an uproar when said that the Church should be more open and welcoming to members of the LGBT community.

37. Pope Francis also helps in international affairs as he helped to restore full diplomatic relations between the United States and Cuba.

38. Pope Francis once said that he had a crush on a girl he met and briefly doubted continuing his religious career when he was a young seminarian.

39. The person that made Pope Francis a priest in 1969 was Archbishop Ramón José Castellano.

40. Pope Francis reportedly showed an immediate sign of a changing approach to formalities at the Vatican when he wore a white cassock, not the red, ermine-trimmed mozzetta.

41. Unlike other Popes, Pope Francis received his cardinals’ congratulations while standing instead of being seated on the papal throne.

42. The first function that Pope Francis carried out after becoming a Pope was bestowing the Urbi et Orbi blessing on thousands of pilgrims gathered in St. Peter’s Square.

43. Pope Francis also reformed the church by abolishing the money that was paid to Vatican employees upon the election of a new pope.

44. Pope Francis was once asked to allow married men in Great Britain to be ordained as priests by the British Catholic peers and members of Parliament.

45. Pope Francis washed and kissed the feet of ten male and two female juvenile offenders on the first Holy Thursday following his election. He was the first to do so.

46. On 20 November 2016, Pope Francis established the World Day of the Poor in his Apostolic Letter, Misericordia et Misera.

47. In his view on Covid-19, Pope Francis maintains getting a COVID vaccination is a moral obligation.

48. Pope Francis consecrated both Russia and Ukraine on March 25, 2022, after the War started there.

49. Pope Francis allowed bishops to institute women to the ministries of acolyte and lector in 2021.

50. Pope Francis published his first major letter as pope, the apostolic exhortation Evangelii Gaudium on the 24th of November 2013.

51. Pope Francis after his election was determined to correct Vatican finances and mandated cardinals to sort out Vatican finances following scandals during the papacies of Pope Benedict and Pope John Paul II.

52. The first papal tour of Ireland since John Paul II’s historic trip in 1979 was that of Pope Francis.

53. Pope Francis became the first pope to hold a papal Mass on the Arabian Peninsula in 2019 after being invited by Mohammed bin Zayed Al Nahyan.

54. During his Regina Caeli address, Pope Francis once made use of his diplomatic image to call for peace between Israel and Palestinians.

55. Pope Francis once sold off the shares of Buenos Aires archdiocese in multiple banks when he was an Archbishop there.

56. Pope Francis was the only church official to reconcile with Jerónimo Podestá, a suspended Bishop, in 2006.

57. Pope Francis was elected president of the Argentine Episcopal Conference In 2005.

58. Although mainstream media associates him as being the first non-European pope, Pope Francis is actually the 11th.

59. On the night of Pope Francis’ election, he took a bus back to his hotel with the cardinals, rather than be driven in the papal car.

60. Pope Francis is the first pope since Pope Pius X to live outside the papal apartments.

61. On the 12th of May 2013, Pope Francis surpassed the record of Pope John Paul II in canonizing the most saints in a pontificate.

Hope you enjoyed the ride, please tell us your view in the comment section below.  Check out 61 Interesting Facts about The Catholic Church