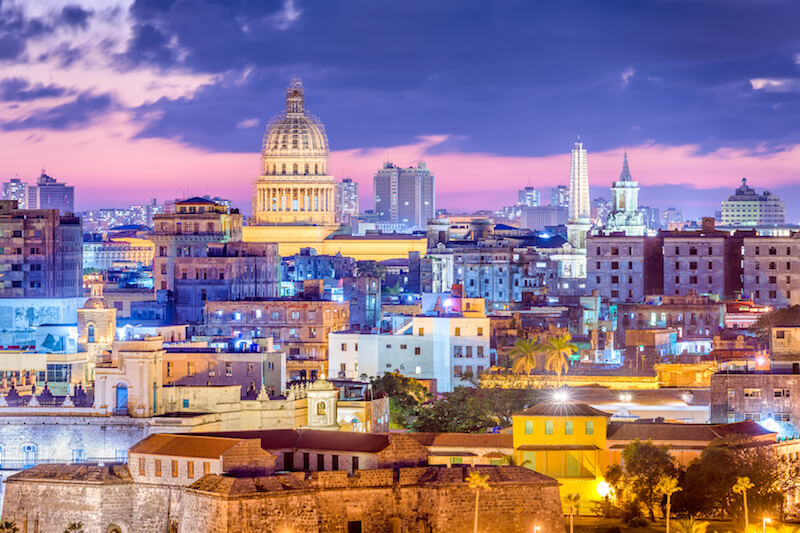 Havana is a city that is located in the Caribbean and it is the capital of Cuba. Havana also has the major port of Cuba, where about 50% of the import and export are carried out. The population of this city is just about 2.1 million and it has about 781.58 km2 of land area which makes it the largest city of Cuba and the fourth largest in the Caribbean region. Do you want to know the sinking of a US battleship in the Harbour of Havana caused a war? Keep reading to discover more fun facts about Havana.

1. The place which was once used as the presidential palace during Fulgencio Batista’s presidency is now the Museum of the Revolution.

2. The city of Cuba was established in 1519 and has about fifteen municipalities.

3. The immediate cause of the Spanish-American war was the sinking of a US battleship in the Harbour of Havana, Maine.

4. Just like what Cuba is known for, Havana is always filled with tourists, with over 1 million tourists every year.

5. Part of the city known as the Old Havana became a UNESCO World Heritage Site in 1982.

6. The major contributors to Havana’s economy are manufacturing, transportation, tourism, construction, and communication.

7. Havana was once one of the major trade centers that existed in the New World, because of its location.

8. The world-famous Habanos cigars are produced and manufactured in the city of Havana.

9. More than fifty percent of the exports and imports of Cuba pass through the city of Havana.

10. Stats show that the highest human development and the highest income of Cuba come from Havana.

11. The law for the free enterprise was implemented in the economy of Havana by Raul Castro in 2011.

12. The financial sector of Cuba, also lies in Havana, as the National Bank Of Cuba is located in this city.

13. Vedado, which was developed between 1930 to 1960, is now the financial and economic center of Havana.

14. The three castles in Havana’s coat of arms represent the Fuerza Castle, the Morro Castle, and the Punta Castle, which defended the city.

15. Havana has the largest fortified fortress in the Americas and it dates from the 16th to 18th century.

16. The French pirate who was known as Jacques de Sores looted and burned this Cuba city in 1555.

17. The person that gave the capital of Cuba, Havana, its name was Pánfilo de Narváez, a Spanish.

18. The first major economic activity that was carried out in Havana was trading at the port, and this attracted Pirates and buccaneers.

19. At all levels of education in Havana, the government takes full responsibility, and education is compulsory except for higher learning.

20. Located in the Vedado section of Havana the University of Havana was founded in 1728.

22. The Cuban National Ballet School is the most prestigious ballet school in the world and one of the largest with over 4500 students.

23. Havana was granted the title of a city by King Philip II of Spain in December 1592.

24. The is a festival in Havana that is known as the Havana Film Festival that helps to promote Latin American filmmakers.

25. Havana attracted more tourists than any other part of the Caribbean from 1915 to 1930.

26. The largest religious group that is in this capital city of Cuba is the Roman Catholics.

27. The patron saint of Havana is San Cristobal or Saint Christopher when translated, and there is a Cathedral dedicated to him.

28. The number of Jewish communities in Havana has reduced drastically, with only about 1500 Jews living there according to the New York Times.

29. More than 9% of the population of Havana live in Cuarteria, which is a large building that can host about 60 families.

30. Most of the city, including the highly populated areas of Havana, is in urban decay.

Hold! Do you know that the shortest flight in the world takes just 57 seconds to be complete?  Check out more 61 Surprising and Extraordinary World Facts.

31. The convent of San Felipe and the monastery of Santa Teresa in Havana was completed in the 17th century.

32. There was an epidemic that affected the majority of the population of Havana in 1649 and was introduced by Cartagena from Colombia.

33. In the middle of the eighteenth century, Havana was ranked as the third-largest city in the Americas.

35. In 1740, Havana became the only drydock in the New World and was the largest and most active shipyard in Spain.

36. British ships which consisted of more than 11,000 men and 50 ships captured Havana during the seven years war.

37. During the 19th century, Havana was known as the Paris of the Antilles because the city became flourishing and fashionable again.

38. The first railroad that was constructed in Havana was in 1837, which was about 51km and was used to transport sugar.

39. Slavery was still legal in Havana and the whole of Cuba attracted South American interest, until 1886.

40. The city walls of Havana that were constructed for fortification were broken down in 1863 in order to enlarge the city.

41. Havana is located in the southern part of the Florida Keys and the northern coast of Cuba.

42. The Plaza del Vapor was built by the architect of the Palacio de la Marquesa de Villalba Eugenio Rayneri Sorrentino in 1835.

43. The Castillo del Morro which is located at the Havana bay shows the life and wealth of the colonial period of Cuba in Havana.

44. Neoclassicism was introduced into Havana immediately after the railroad was constructed in the 1840s.

46. The Habana Hilton was once the largest and tallest hotel in Latin America, with over 630 guestrooms and a capacity to park 500 cars.

47. The Museo Nacional de Bellas Artes de La Habana has one of the largest collections of Latin American paintings and sculptures.

50. Since most of the businesses in Cuba are nationalized, the railway is also included and is run by the FFCC (Ferrocarriles de Cuba – Railways of Cuba).

51. More than eleven million people made use of the Havana railway in 2004.

52. The busiest route of the Havana railway is between Havana and Santiago de Cuba and about 836 kilometers apart.

53. The first air-conditioned coaches that were made use of in Havana railway was introduced in 2000 by Union de Ferrocarriles de Cuba.

54. A Moscow type of metro was planned to be constructed in the 1980s when the Soviet Union was still controlling the city.

55. The 1992 IAAF World Cup in Athletics was hosted by the capital city of Cuba, Havana.

56. Although it began as a horse car system, Havana was operating a tram system until 1952.

57. The largest stadium that Havana has is the Estadio Latinoamericano.

58. Havana was the city that hosted the eleventh Pan American Games in 1991.

61. In Havana, it rains the heaviest from June to October and the lightest from December to April.

Hope you enjoyed these Interesting Havana Facts, leave a comment and share them with friends and family.  Do you know that the number of dogs in Paris is higher than the number of children? Check out more details about this and checkout 61 Fascinating Facts about France and Paris