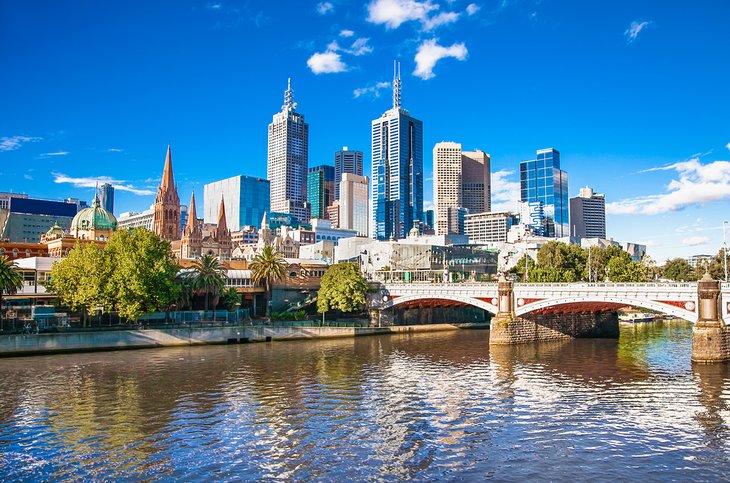 Melbourne is where the Modern Federation Square Development is located and it is the coastal capital of Victoria, a state in Australia. The city is known for the different art displays it has such as the Melbourne Arts Precinct, the National Gallery of Victoria which is filled with Australian and indigenous art, and Arts Centre Melbourne which is a performing arts complex. Do you know that the Melbourne Zoo has more than 320 species of animals? Keep reading to discover more interesting facts about beautiful city that experience 4 different of seasons in a year.

1. Batmania was the original name of Melbourne after one of the founders of the city.

2. In Melbourne, it is a common occurrence to experience 4 different of seasons in a year.

3. The major streets in Melbourne are built to allow horse carriages to make u-turns at 99ft wide.

4. Citizens of Melbourne go about with reusable coffee cups and it is the number one city with most cafes per capita.

5. The coffees in the city of Melbourne have different names given to them.

7. The estimated cost of the construction of Melbourne Star is about $100 million.

9. The name of the contractor of this structure is Hansen Yuncken and the architect was Sanoyas.

10. The Melbourne Star is about 120 meters tall and is simply a Ferris wheel.

11. Melbourne Football Club is one of the oldest professional football clubs whose nickname is the demons.

13. The official colors of this club are red and navy blue.

14. The current president and CEO of the club are Kate Roffey and Gary Pert.

15. The Melbourne Storm was founded in 1997 and is a rugby league club that is based in Melbourne.

16. The Melbourne Storm entered into the National Rugby League in 1998.

17. The official primary colors of this rugby club are purple and navy while its secondary colors are white and gold.

18. The current CEO of the Melbourne Storm is Justin Rodski

19. The Melbourne Sealife Aquarium was opened to the public in the year 2000.

20. It has about ten thousand plus animals and more than five hundred species.

21. It is a southern ocean and Antarctic aquarium that is located beside the Yarra River in Melbourne.

22. Merlin entertainments are the owner of the Melbourne Sealife Aquarium.

23. The Melbourne Cup is an annual event that is the most famous thoroughbred race in Australia.

24. It is dubbed as the race that stops the nation and is held every first Tuesday of November every year.

25. This event is currently sponsored by Lexus and it started about 161 years ago.

26. The Melbourne Cup has the world’s richest “two-mile” handicap (a handicap is a race where the horse carries different weights) in horse racing.

27. The Melbourne Zoo is located in Parksville, within the royal park in Australia.

28. The Melbourne Zoo has more than 320 species of animals from both Australia and around the world.

29. Bicycles are one of the things that are not allowed at the Melbourne Zoo.

WAIT! Do you know that the number of dogs in Paris is higher than the number of children? Explore more 61 Fascinating Facts about France and Paris

31. The Melbourne cricket ground is located in Yarra Park and is known locally as the G.

33. The Melbourne cricket ground is the largest stadium in the Southern Hemisphere and the 2nd largest cricket stadium by capacity.

34. The Melbourne Shrine of remembrance was built for the purpose of a war memorial.

35. The Melbourne Shrine of remembrance was opened to the public on the 11th of November 1954.

36. The shrine of remembrance was designed by World War 1 veterans, Philips Hudson and James Wardrop.

37. The shrine of remembrance went through a long period of development and was once proposed to be the Victoria memorial.

38. Chinatown, Melbourne is centered on the eastern end of Little Bourke Street.

39. Chinatown in Melbourne was established in the 1850s during the Victorian gold rush.

40. Chinatown in Melbourne is the oldest China settlement in the Southern Hemisphere.

41. It is one of the major places that established the Chinese culture of Chinese immigrants in Australia.

42. The slogan of Luna Park, Melbourne is “just for fun”.

43. Luna Park is a historic park in Melbourne that is located in Port Phillips Bay in Australia.

45. The total number of attractions in this park is about 20 and the roller coasters are about 2.

46. Located in Victoria, Australia, St Patrick’s Cathedral is the cathedral church of the Roman Catholic Archdiocese of Melbourne.

48. The person that designed this Cathedral was William Wardell and it was built in a Gothic style.

49. The royal botanical gardens are located across two places, Cranbourne and Melbourne.

50. The royal botanical garden was opened to the public in 1816 and it covers about 38 hectares of land.

51. The royal botanical garden is operated by the Board of the Royal Botanic Gardens.

52. This botanical garden records about 2 million visitors every year and it contains both Australian native and non-Australian gardens.

54. It is located in spring street, East Melbourne, and has a neoclassical style of architecture.

55. The construction of the Parliament house started in 1855 and was completed in 1929.

56. This port has the record as the largest containerized and cargo port in the whole of Australia.

59. St Paul’s Cathedral is the cathedral church of the Diocese of Melbourne in Australia.

61. St Paul’s Cathedral was designed by Williams Butterfield and has a Gothic revival architectural style.

Do you know there is a place in Canada that mysteriously has less gravity than the rest of the planet?  Uncover more Fascinating Facts About Canada