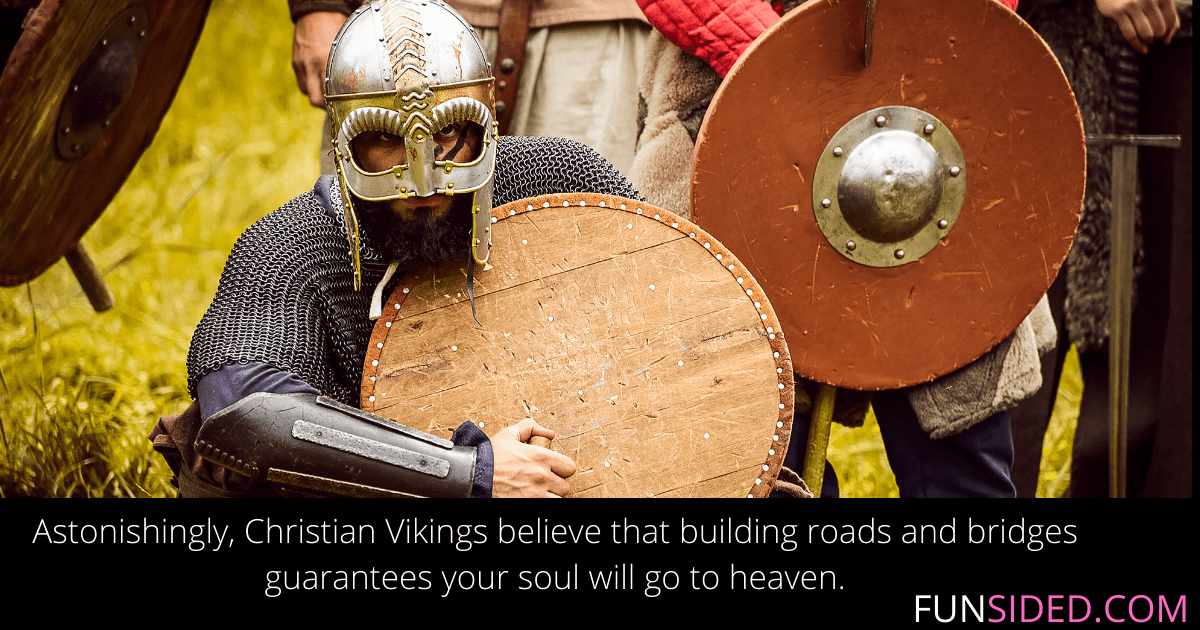 Vikings were known to plunder ships and terrorizing coastal areas in Europe but in the article below we will be exploring some weird and unbelievable facts about the Norsemen:

2. Vikings were also known for their good hygiene and are well-groomed.

4. As shocking as it may sound, the word Viking was a phrase coined from the 19th-century as they were usually known as Norsemen and Danes.

5. Vikings usually celebrate a dead prominent member in a stylish and unique way by putting the deceased on a boat with their clothes, animals, and jewelry, setting it on fire, and pushing it out to sea.

6. Vikings don’t tolerate any form of weakness in their camp and are known for abandoning their children by throwing them into the sea or leaving them alone in the wilderness.

7. Interestingly, Viking women had some basic rights such as requesting a divorce and inheriting the properties of their husbands.

8. Viking men are known to have a preference for their hair being blonde.

9. Some popular words such as Snort, Lump, hell, anger, weak, skull, slaughter, and Scrawny all originated from Vikings.

10. Vikings are excellent ship makers as it aids their military and invasion success rate.

11. While most Vikings are known to plunder or loot ships, some of them move to other countries to trade, farm, or craft.

13. The only form of sweetener known to Vikings is Honey and they use it to make strong alcoholic drinks called Mead.

14. Vikings are known for leaving their marks wherever they go as the majority of cities, towns, or villages ending in “-by”, -Thorpe, and “-ay” are believed to have been settlements for Vikings.

15. A Viking’s most prized asset is their sword as only a few of them could afford it because it was very expensive.

16. Thralls are knowns as Vikings’ slaves and they are majorly captured during their raids and are either taken back to Scandinavia or traded for silver. They are also used as labor for large-scale construction projects.

17. In the battle of Stamford Bridge, famous Viking Harald Hardrada was killed by King Godwinson in his quest to take over the English throne. His death led to the end of the Viking age.

18. Swimming as well as weapons training and combat training was very popular amongst Vikings.

19. The word “Berserk” was common amongst Vikings as they believe warriors that enter battle in form of a trance are known as “Berserkers”.

20. Contrary to many beliefs, Icelandic-Norwegian explorer Leif Erikson reportedly discovered the new world about 500 years ago before Christopher Columbus.

21. Skiing was a popular activity amongst Vikings as they see it as a form of leisure.

22. Shockingly, there was no unity amongst Vikings as they had different groups and do fight against each other rather than work together as a collective.

23. Vikings often played a game similar to that of Hockey and it is usually called “Knattleik”. Although, no form of rules is attached to the game it is played with sticks and a Ball.

25. There were four major classes of the Norse men which includes Kings, Jarls, Karls, and Thralls. Kings were the rulers, Jarls were noblemen, Karls were farmers while the Thralls were slaves.

26. Bear cubs are often caught and raised by Viking families while Polar bears are reserved for the Jarls.

27. Interestingly, in Sweden, it is believed that there is a remote village that still speaks the ancient Norse language.

28. According to the legends, there was an ancient Viking king that took Christmas very seriously and forced his members to drink ale all through the holidays. Fines were surprisingly put in place for those who didn’t follow his instructions.

29. When Vikings come together to settle disputes and make laws, it is called a “Thing”.

30. Astonishingly, one of the Viking Kings once ruled England for five weeks.

31. Dane laws are associated with regions in England that were forced to follow the instructions that Vikings implemented after the invasion.

32. Spears are commonly used by Vikings when fighting rather than Swords.

33. One of the Greatest and powerful Viking King popularly known as Cnut ruled over England and Norway and did create what was known as the North Sea Empire. He was known for his fearless nature and brutal methods.

34. Noble Vikings were more stylish and dandy in their mode of dressing as they often show off their wealth with silk clothes and fancy pieces of jewelry.

35. Vikings were known across the globe by different names as the Irish often called them Dubgail and Finngail (dark and fair foreigners), the Germans called them Ascomanni (ashmen), the Gaels knew them as Lochlannach (lake people), while the Arabs, Byzantines, and Slavs named them the Rus’ and the Swedish called them Sworn Men.

36. The type of religion practiced by the Vikings was called Norse Paganism.

37. Vikings built ships known as Knarrs which were able to withstand the open oceans and were used in navigating Iceland, Greenland, and North America.

38. Vikings were credited to have founded a number of European cities such as Dublin, Wexford, Waterford, Cork, and Limerick were all renowned Viking settlements.

39. Majority of Vikings’ stories or history were told or written by their enemies as they didn’t leave too many clues behind. They only left some fragmented writings in the form of runestones.

40. Vikings’ diets varied a lot from the upper class to the lower class. While the Upper Class eat seafood and meats the lower class lived off their farms and ate more vegetables.

41. Vikings were often considered as Christians’ nightmares as they dealt with them in a brutal manner. Many monks and priests believe they were sent from God to punish them for their sins.

42. A Viking favorite board game is called “Hnefatafl”. It is very similar to chess using figurines representing two rival armies.

43. Vikings had respect for law and order as men were obliged to attend meetings where all legal issues are resolved by the community leaders.

44. Huscarls were elite bodyguards tasked with the job of defending Scandinavian Kings. It was believed their axes were so sharp that it can pierce helmets and shields into two equal halves.

45. Viking women often feed their injured warriors onion soup to know the extent of their injuries.

46. Majority of Vikings’ boots were made of goat skins.

47. Erik the Red was so brutal in nature that his fellow Vikings had to exile him from Norway and Iceland.

48. Vikings believed in two groups of gods namely Hesir and the Vanir.

49. Interestingly, Vikings are lovers of sagas, riddles, songs, and stories.

50. The average life expectancy of a Viking is about forty years.

51. Surprisingly, a 12-year-old Viking is already considered an adult.

52. Vikings’ houses in England were often made of wooden sticks.

53. An average Viking woman dies at the age of 35 due to difficulties encountered during childbirth.

54. Vikings’ longships could travel up to a staggering 200km daily.

55. The first Viking raid occurred in Lindisfarne in 793.

56. Whale and seal skins are used in making strong ship ropes by the Norse people.

57. Vikings had three major festivals: Jolabot or Mkdsvetrarblot in Mid January and Sigrblot in April while Vetrarblot is usually held in mid-October.

58. Astonishingly, Christian Vikings believe that building roads and bridges guarantees your soul will go to heaven.

59. Wrestling was a popular sport amongst Vikings and it was sometimes used in settling disputes.

60. Interestingly, a fleet of 350 Vikings Ships attacked England via River Thames in the year 851 AD.