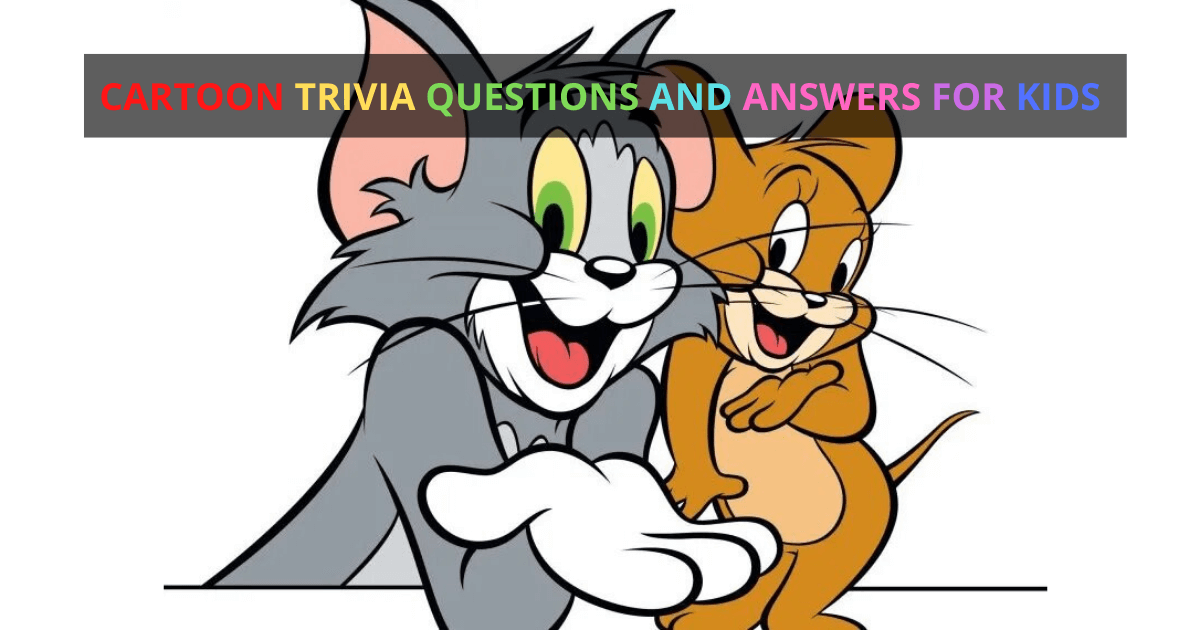 Where are the cartoon lovers at? If you are a real cartoon lover and fond of cartoon animation movies, then this is your right spot! Here, we have a collection of vast cartoon trivia quizzes that will cover some of the most iconic cartoon characters and shows of all time.

This fun cartoon trivia series is aimed at bringing back your childhood nostalgia for cartoons and it will surely make you want to feel young again! Put your trivia skills to the test with our exciting categories of classic cartoon trivia, cartoon character trivia, and Disney cartoon trivia, and be sure to catch your fun as well. Let’s go!

1. Who was Toodles in “Tom and Jerry?”
Answer: Tom’s girlfriend.

2. What kind of animal is Rafiki in “The Lion King?”
Answer: A Mandrill.

3. In “The Lion King,” Mufasa told Simba that one day he will rule everything that he touches.
Answer: Light.

4. In the movie, “Luca,” what do Luca’s people call the humans at the beginning of the movie?
Answer: Land Monsters.

5. In “Luca,” what does Alberto teach Luca to say to quiet his fears?
Answer: “Silenzio Bruno!”.

6. According to Alberto what is the greatest thing humans ever made?
Answer: The Vespa.

8. What breed of dog does Spike belongs to?
Answer: Bulldog.

9. In “Luca,” the Portorosso Cup is a triathlon consisting of three parts. What are they?
Answer: Swimming, cycling, and eating pasta.

10. Who is the reigning champion of the Portorosso Cup in the movie?
Answer: Ercole Visconti.

11. What song was played at the opening of “The Lion King” movie?
Answer: The Circle of Life.

12. In “The Lion King,” what is the song Scar sings when he is talking about killing Mufasa?
Answer: “Be Prepared”.

13. What kind of animal is Pumbaa in “The Lion King?”
Answer: Warthog

14. In “Ratatouille,” Chef AugusteGusteau wrote Remy’s favorite cookbook which went by what title?
Answer: Anyone Can Cook.

15. How does Remy control Linguini and give him directions on how to cook?
Answer: By pulling Linguini’s hair.

18. Who is Massimo Marcovaldo in “Luca?”
Answer: Gulia’s father.

19. What color are Remy’s shoes in “Ratatouille?”
Answer: Red.

20. In “Ratatouille,” who is the only female chef at Gusteau’s?
Answer: Colette.

21. What kind of rodent was Remy in “Ratatouille”?
Answer: Rat.

24. In “The Lion King,” where did Timon and Pumbaameet Simba?
Answer: In a desert.

26. Where did the rat colony live in “Ratatouille?”
Answer: In the attic.

27. In “Rio 2,” what is the name of the little girl that found Blu and adopted him?
Answer: Linda.

28. During what Brazilian festival was the macaws in “Rio 2” kidnapped by the smugglers?
Answer: The Rio Carnival.

30. What is the name of Remy’s father in“Ratatouille?”
Answer: Django

31. In “Ratatouille,” where did Linguine hide Remy so that Remy could be the cook and not be noticed?
Answer: Under Linguine’s chef’s hat.

33. Who is Lorenzo Paguro in the movie, “Luca?”
Answer: Luca’s father.

34. How does Luca’s grandmother sleep?
Answer: With her eyes open.

35. In “The Lion King,” Mufasa was stabbed to death. True or False.
Answer: False. He was trampled by a stampede.

39. In “Tom and Jerry,” George is Tom’s cousin. Who is George mostly scared of?
Answer: Jerry, the mouse.

40. In “The Lion King,” what is the name of the place Simba was forbidden to go to?
Answer: The Elephant Graveyard.

41. In “Ratatouille,” what job is Remy given in the rat colony?
Answer: Food checker.

42. “Walking is just like swimming but without fins or a tail.” When did Alberto say this in the movie, “Luca?”
Answer: When teaching Luca how to walk.

43. In “Ratatouille,” who called the health inspector to report a rat infestation at Gusteau’s?Answer: Skinner.

44. “I laugh in the face of danger.” Which two people made this statement in “The Lion King?”
Answer: Simba and Nala.

45. “Hakuna Matata” is a familiar phrase from “The Lion King” movie. What does it mean?
Answer: No worries.

47. In “Ratatouille,” what did people throw at Remy after he fell out of Linguini’s chef hat?
Answer: Bottles.

48. When Scar first appeared in “The Lion King,” what animal was he trying to eat before Zazu interrupted?
Answer: A mouse.

49. What is the name of the lion and lionesses’ cave in “The Lion King?”
Answer: Pride Rock.

51. In “Ratatouille,” what name does Linguini give Remy?
Answer: Little Chef.

53. What object does Giulia show Luca that gets him interested in school?
Answer: Telescope.

54. In “The Lion King,” what did Simba practice as a young cub?
Answer: His roar.

55. During the fight between Simba and Scar in “The Lion King” movie, what started the fire?
Answer: Lightning.

56. What is the name of the famous food critic in “Ratatouille” whose bad review kills Gusteau?
Answer: Anton Ego.

57. In “Ratatouille,” did Alfredo Linguini know that he was AugusteGusteau’s son?
Answer: No.

58. Ratatouille is an Italian dish. True or False?
Answer: False. It is French.

59. Who is the little blue-colored bird who serves as the royal advisor in “The Lion King?”
Answer: Zazu.

60. In “Luca,” were there sea monsters living in Portorosso before Luca and Alberto showed up?
Answer: Yes

61. In “The Lion King,” what was the last sentence Mufasa’s spirit says to Simba?
Answer: “Remember who you are. Remember.”

Did you enjoy playing these cartoon trivia quizzes? Leave a comment below and share if you like the content. Check out 101 General Knowledge Trivia Questions and Answers – Part 1 here or Try solving 6 Tricky Detective Riddles for Adult Deep