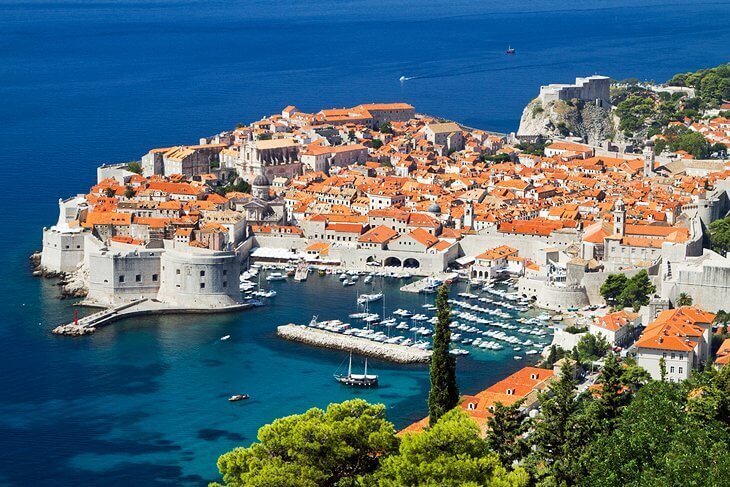 Dubrovnik is a city that is located in what is now known as Croatia and was historically called Ragusa. The city is one of the most prominent tourist destinations in the Mediterranean Sea and according to the 2011 census, had a population of about 42,615 people. In recognition of its outstanding medieval architecture and fortified old town, the city of Dubrovnik was added to the UNESCO list of World Heritage Sites in 1979. Did you know that Dubrovnik was among the filming locations of the famous movie “Game of Thrones”? Read further to learn more interesting and fascinating facts about this great ancient city.

1. Before Dubrovnik became just a city, it was once a maritime Republic that existed from 1358 to 1808 before it was conquered by the French empire.

2. Dubrovnik is a very civilized place and it became the first in Europe to abolish the human slave trade on 27 January 1416.

3. Dubrovnik is considered a living, breathing museum because of how ancient its history, stone, and buildings are.

4. The person that is considered to be the greatest Croatian playwright of all time is from Dubrovnik and is named Marin Drzic.

5. The popular walls of Dubrovnik have been protecting the citizens of Dubrovnik since the city’s founding prior to the 7th century.

6. Dubrovnik has been gracing the screens from time to time and the popular Game of Thrones filmed some parts of the movie in the city and this has attracted a lot of tourists.

7. Unlike other cities, the city of Dubrovnik is characterized by cats and they can be seen almost everywhere in large groups in the streets.

8. Dubrovnik has the third oldest pharmacy in Europe and the oldest still in use on the continent today and it is known as the Old Pharmacy.

9. Dubrovnik was one of the first states in the world to recognize the United States of America’s independence back in 1783.

10. Dubrovnik once saved Richard the Lionheart, who was an English King returning from the Third Crusade in 1192.

11. The City Walls of Dubrovnik which are up to six meters thick, have never been breached by a hostile army.

12. The naval fleet of the Republic of Dubrovnik in the 16th century was one of the strongest in the Mediterranean with over 40,000 sailors.

13. The Dubrovnik river Ombla which has about thirty meters long watercourse, is one of the shortest rivers in the world.

14. Because of how popular the seaport of Dubrovnik was in the middle age, it was considered one of the first European tourist destinations for cruise ships.

15. Dubrovnik had a weird way of marking midday before World War 1 started, they fired a Canon when it was midday.

16. When there was a short supply of stone while the building of the Minčeta Tower was going on, it was decreed that every visitor to the city must bring a stone with them.

17. The history of Dubrovnik is dated back to the 7th century when the town known as Ragusa was founded by refugees from Epidaurus.

18. Dubrovnik was almost completely destroyed when a devastating earthquake hit the city in 1667 destroying even their Cathedral.

19. Dubrovnik was part of the Axis puppet state Independent State of Croatia when the country was divided in World War 2.

20. During the Croatian War of Independence, Dubrovnik was besieged for seven months by the Yugoslav People’s Army.

21. Because of the architectural design and how symbolic Dubrovnik’s walls are, it had about 1.3 million visitors in 2018.

22. Dubrovnik became the Mediterranean’s top tourist destination, as well as a popular filming location after restoration works were carried out on the city between the 1990s and 2000s.

23. According to excavations in 2007, there is evidence for the presence of a settlement in the pre-Christian Dubrovnik.

24. Dubrovnik became a truly oligarchic republic and was a commercial outpost in the 12th and 13th centuries.

25. Dubrovnik was under the sovereignty of Venice from the 11th century to the 12th century.

26. Throughout Dubrovnik’s rule as a free state, from 1382 to 1804 the city paid tributaries to the Sultan of the Ottoman Empire.

27. The first quarantined hospital in Dubrovnik was established in 1377 and an orphanage was opened in 1432.

28. Constructed by the Neapolitan architect and engineer Onofrio della Cava, the first water cistern in Dubrovnik was built in 1438.

29. The first medical serthay was introduced in Dubrovnik in 1301, and the forest almshouse was in 1347.

30. The sovereignty of Dubrovnik was balanced between the interests of Venice and the Ottoman Empire for centuries.

31. The language that was used originally on the document of the Republic of Dubrovnik was Latin before Italian in the 15th century.

32. After the war that led to Croatia’s independence, much damage was caused in Dubrovnik and UNESCO made sure that all the World Heritage Sites were reconstructed in the original style.

33. In 1996, there was a Croatia USAF CT-43 crash, near Dubrovnik Airport and this killed everyone on the United States Air Force jet.

34. Dubrovnik was known not to conquer neighboring cities but was known for trading and sailing under a white flag with the Latin word Libertas.

35. At a time when there were only 16 other countries that had Cardinal protectors, Dubrovnik had one.

36. The catastrophic earthquake of 1667 in Dubrovnik killed over 5,000 citizens and leveled most of the public buildings.

37. One of the major highlights of how diplomatic Dubrovnik is was their involvement in the American Revolution.

38. The annual Dubrovnik Summer Festival has been awarded a Gold International Trophy for Quality in 2007 by the Editorial Office.

39. The Franciscan monastery’s library in Dubrovnik which dates back to the renaissance period possesses 30,000 volumes, 216 incunabula, and 1,500 valuable handwritten documents.

40. An impressive Treasury with relics of Saint Blaise is housed at Dubrovnik’s Baroque Cathedral which was built in the 18th century.

41. One of the symbols of the free city-state of Ragusa was the 31-meter-high Dubrovnik Bell that was built in 1444.

42. It was the Venetian architect Marino Gropelli that built the Saint Blaise Church and the Baroque portal.

43. The walls of Dubrovnik were used as a filming location for the fictional city of King’s Landing in the HBO television series.

45. Unlike other important cities in Croatia, Dubrovnik is one of the cities that is not accessible by rail.

46. The third busiest airport in the whole of Croatia is the Dubrovnik Airport and it has bus services that connect people to the airport.

47. Dubrovnik was once connected to Mostar and Sarajevo by a narrow-gauge railway until 1975.

48. Dubrovnik is the city that will host the 2025 World Men’s Handball Championship.

49. Dubrovnik has an Institute of History that is known as the Croatian Academy of Sciences and Arts.

50. Dubrovnik has an annual festival that is known as the Dubrovnik Summer Festival, which is a 45-day-long cultural event.

51. The importance of Saint Blaise to the citizens of Dubrovnik is similar to that of Saint Mark the evangelist to the people of Venice.

52. On the reverse of the Croatian 50 kuna banknote which was issued in 1993 and 2002, there is a depiction of the Old City Of Dubrovnik.

53. The oldest arboretum in the world which dates back to 1492, known as the Arboretum Trsteno is located in Dubrovnik.

54. The famous George Bernard Shaw once said: “If you want to see heaven on earth, come to Dubrovnik” when he visited the city in 1929.

55. Because of the overflow of tourists in Dubrovnik, the city had to take steps to reduce the excessive number of tourists, especially in the Old Town in 2018.

56. Dubrovnik’s main public beach is Banje and is the home to the famous Eastwest Beach Club.

57. There is an indication that the Glagolitic script was also likely once used in Dubrovnik as there have been discoveries of medieval Glagolitic tablets near the city.

58. The official language of Dubrovnik was Latin until 1472 because of the increasing migration of the Slavic population from inland Dalmatia.

59. Dubrovnik became part of the newly established Banovina of Croatia in 1939.

60. The Italian language that was spoken in the republic of Dubrovnik was heavily influenced by the Venetian language and the Tuscan dialect.

61. The Austrian government granted Ghetaldi-Gondola the title of “Baron” after he was elected Mayor of Dubrovnik, serving for 13 years.

Hope you enjoyed these Interesting facts About Dubrovnik, leave a comment and share with friends and family. Do you know that the shortest flight in the world takes just 57 seconds to be completed?  Check out more 61 Surprising and Extraordinary World Facts.