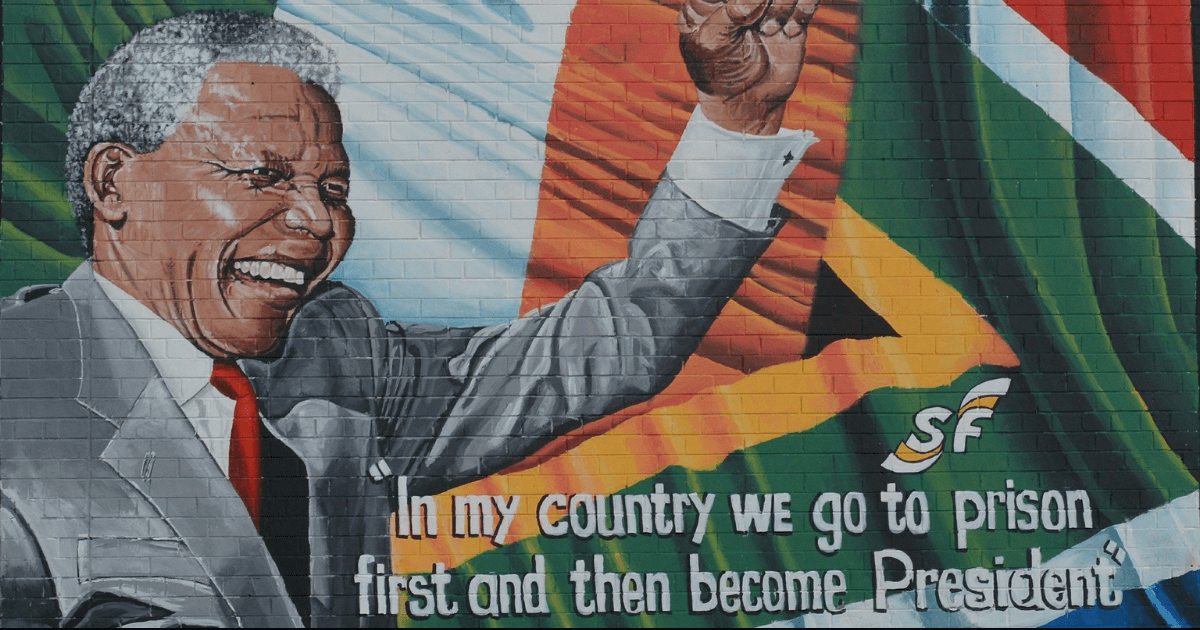 The history of South Africa will never be complete without the Great Nelson Mandela given his fight and struggles against the anti-apartheid government. He is often seen as a symbol of freedom and also regarded as the most famous political prisoner in the world. Below are interesting and mind-blowing facts that you may not have heard anyway else.

1. Nelson Mandela was the first elected Black President of South Africa between 1994-1999.

4. Sounds witty but Nelson Mandela had to dress like a Chef or a field worker on various occasions in other to avoid being arrested by the Police due to his political activities.

5. Mandela spent over 27 years in different Prisons but he spent more than half of it at Robben Island.

6. Only a few can still remain focused in Prison as Nelson Mandela incredibly earned his Bachelor of Law degree from the University of South Africa while still imprisoned.

7. Despite being in prison, Nelson Mandela was still in touch with top anti-apartheid members such as Desmond Tutu and Oliver Tambo.

9. According to reports from the BBC, Mandela never failed to exercise in Prison every morning throughout his 27 years stay in jail.

10. In 1993, Mandela was honored with a Nobel Peace Prize for peacefully ending the Apartheid regime in South Africa and laying the groundwork for a new Democratic era.

11. Rolihlahla was quite unique as he was the first in his family to receive a formal education.

12. Mandela was a man of many talents as he mastered his acting and ballroom dancing skills while in the University.

13. He was infamously expelled at the University of Witwatersrand for participating in a student protest.

14. Mandela once worked as a security guard at a mining company in Johannesburg, South Africa.

15. His love and passion for politics kick-started from his days as a Law clerk at the law firm Witkin.

16. Nelson alongside a friend in 1952 pioneered the first South African black law partnership.

17. The apartheid going on in his country didn’t deter him from going to garner more knowledge as he was the only black student in his law school class at the University of Witwatersrand.

18. He was heavily involved in his school politics as he was one of the ringleaders that fought against inequalities and inappropriate hikes in school fees.

20. One of the key excerpts from his famous book titled “Long Way to Freedom” about boxing was “Boxing is egalitarian. In the ring, rank, age, color and wealth are irrelevant.”

21. Mandela never considered himself a rich person both in college and even while in law school.

22. In 1955, he was once indicted for treason having suggested a forceful take over from the current government.

23. In an attempt to get enough support against the anti-apartheid movement, Mandela got some military training in Morocco and Ethiopia.

24. Mandela was often referred to as “Black Pimpernel”- because he usually hides away from the authorities.

25. It is believed that Mandela drew strength and inspiration from his ancestors as they also fought against inequalities in South Africa.

26. Interestingly, the CIA played a major part in the arrest of Nelson Mandela in South Africa with fears of him inspiring communism across the world.

27. Mandela was considered as a class D prisoner which means he can only receive a letter and a visitor every six months.

28. Unfortunately, Mandela’s mother and son died a year apart while he was still in prison. Surprisingly, he wasn’t given the opportunity to pay his last respects to the deceased.

29. Though it didn’t come to fruition, Nelson advocated for the voting age to be increased from 14 to 16 during the 1994 General elections in South Africa.

30. Mandela wasn’t a power-drunk as he only served one term as the President of South Africa.

31. Mandela’s prison was very small and without a bed and plumbing works which implies he slept majorly on the floor and was also forced to do limestone quarry jobs during the day.

32. Mandela lost his teary glands while he worked at the limestone quarry in prison and couldn’t cry again for the rest of his life.

33. Despite dining with a lot of royalties both home and abroad, Nelson Mandela’s favorite meal still remains an African meal called Tripe.

34. Strangely, Mandela was on the United States terrorist watch until 2008 due to his fight against apartheid in his country.

35. Mandela played the role of a school teacher in the famous “Malcolm X” movie in 1992.

36. He was named after a nuclear particle called the “Mandela Particle” by the Physics Institute at Leeds University.

39. His famous lines: “I am the master of my fate. I am the captain of my soul.”, was drawn from reading William Ernest Henley’s “Invictus” to fellow prisoners.

40. Mandela reportedly fled to Johannesburg having found out his people have prepared an arranged marriage for him.

41. Rolihlahla received his Bachelor of Arts honors in 1943 at Fort Hare University.

42. Nelson Mandela was extra special as the United Nations declared the 18th of July as “Nelson Mandela International Day” to honor him.

43. Interestingly, over 100 streets across the globe have their streets named after Nelson Mandela.

44. Given the high rate of AIDS in South Africa, Nelson Mandela was always known to always educating his fellow countrymen about the dangers of the deadly disease called AIDS.

45. The former South African President also had a cordial relationship with the famous Libyan dictator Gaddafi.

46. Quite interesting to know that both Nelson Mandela and Fidel Castro(Former President of Cuba) once co-authored a book titled “How Far We Slaves Have Come”.

47. He was often referred to as Madiba by many South Africans as a sign of respect.

48. One of the many remarkable achievements under Nelson Mandela’s regime was South Africa hosting the 1995 Rugby World Cup of which they ended up winning.

49. Mandela was quite intelligent and brilliant while he was in school as not only did he excelled in his academics but also did well in other extracurricular activities.

50. He has also had great respect and admiration for the Great Mahatma Gandhi given his exceptional leadership skills.

51. Despite not being a citizen of India, he was conferred the highest civilian award of the Republic of India which is known as the “Bharat Ratna”.

52. Nelson Mandela’s biggest moment was at the “Rivonia trial” when he said he was ready to die to promote an ideal Democratic society without prejudice or segregation.

53. Not many can boast of having a state funeral after their death but Mandela can have died at the ripe age of 95 years old in 2013. Over 90 plus dignitaries and royalties all over the world came to pay their last respect to Madiba at his funeral.

54. His legacy continues through the Nelson Mandela Foundation to date.

55. Unknown to many, Nelson Mandela was born into royalty given his father’s lineage being a royal advisor to the King.

56. In his early 50’s, he became the leader of the African National Congress whose main aim is to end racial discrimination and segregation.

57. The name “Nelson” was given to Mandela by his teacher due to their British colonial roots.

58. He wielded a lot of influence as he usually use it to raise funds for his party and charities.

59. His net worth was surprising to many as he had a net worth of over 4.14 million dollars despite spending 27 years of his life in prison.

60. Mandela also made sure he left a trust fund for his 30 children and grandchildren.

61. The Invictus Movie which portrayed Mandela’s life generated a staggering revenue of 122 million dollars of which Matt Damon and Morgan Freeman earned an academy award nomination each for the roles in the movie.