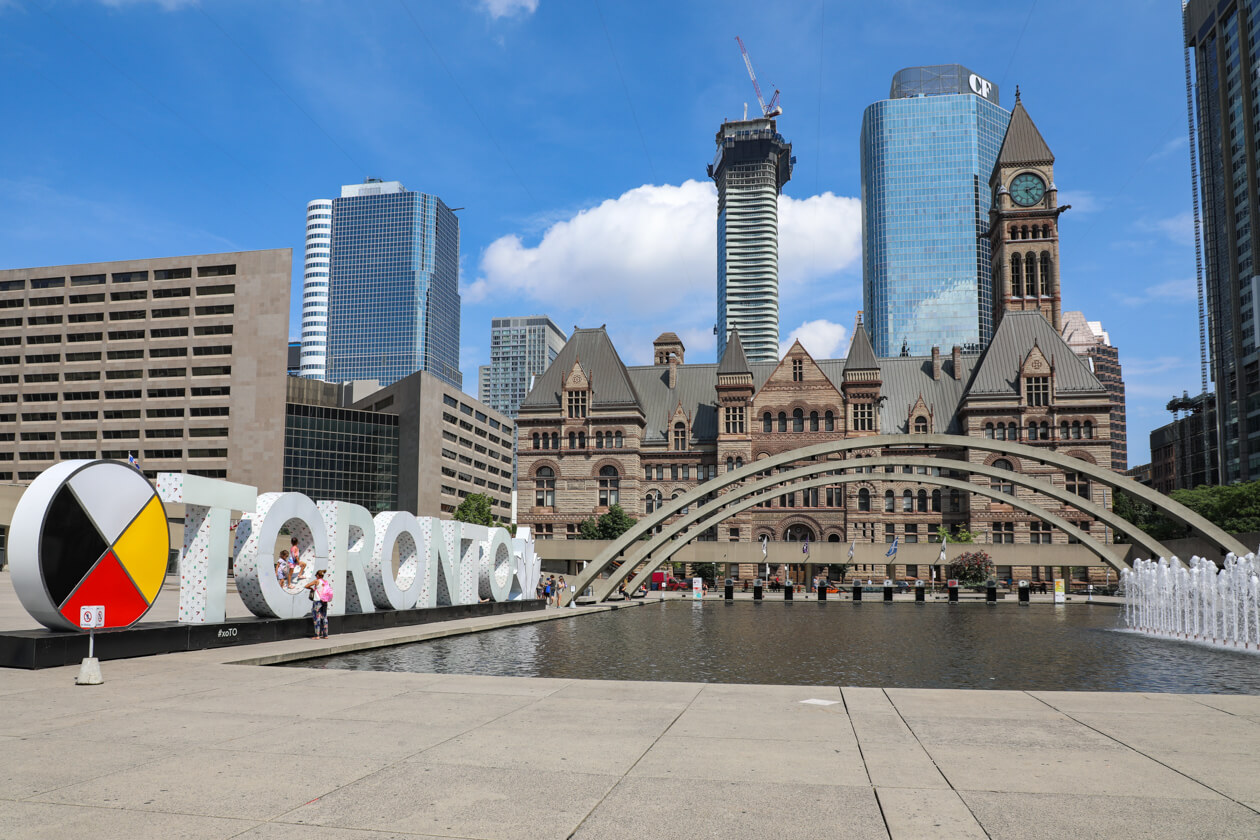 Toronto’s unique identity is rooted in diversity and a rich array of cultural assets worth developing and sustaining. Do you know that Toronto has the world’s largest underground shopping complex?
These fun facts about Toronto was designed with collections of facts and history to bring you the best of all there is to know about the Canadian city of beauty, arts, economics, science, and literally anything you could possibly think of!

2. The word “Toronto” comes from the Mohawk phrase “tkaronto” which means “where trees grow in water”.

3. Toronto is the largest city in Canada and the 4th largest in North America.

4. Toronto has a massive population of over 3 million people, and the Greater Toronto Area boasts of almost 6.5 million people in it!

5. Toronto is one of the most diverse and highly multi-cultural cities in the world, with 50% of its population non-Canadians, and over 200+ ethnic groups, who speak more than 180 dialects.

7. Residents of Toronto are called Torontonians.

8. Toronto has many nicknames, but the popular ones are T.O. and the ‘The Six’ (which refers to the six boroughs that amalgamated to form Metro Toronto).

9. There are over 10 million trees in Toronto, of which four million are publicly owned.

10. According to experts in The Economist’s Business Intelligence Unit, the city of Toronto ranks in the top 10 of the world’s most livable cities.

11. Toronto ranks as the twelfth most economically powerful city in the world, based on economic output, innovation, global economic power score, and its’ financial center score.

12. Toronto is home to North America’s only castle, Casa Loma, and it is considered the continent’s only authentic castle.

13. Toronto welcomes over 40 million visitors annually, with an overall visitor spending of approximately $7.2 billion during their visits.

14. The city of Toronto is home to Canada’s Hockey Hall of Fame, which has over 3000 displays that demonstrate the proud heritage and history of Canada’s national game.

15. Toronto’s Pearson Airport is Canada’s busiest airport. In 2019, the airport handled nearly 50 million passengers to go along with almost 500,000 flights.

16. Toronto’s CN Tower, with a height of 1815.3ft, was the world’s tallest free-standing structure for 34 after it was finished in 1974. It is now the third tallest tower in the world.

18. The city is 76.5 meters above sea level, with the highest point being the intersection at Steeles and Keele at 209 meters.**

19. The Toronto Zoo is the largest zoo in Canada and the third-largest in the world, housing 16,000 animals of 491 different species.

20. Toronto’s Younge Street, once incorrectly held the Guinness World Record for the world’s longest street (a highway was included that isn’t part of the street).

21. There are over 23,700 artists in Toronto, which is almost twice as many artists as any other Canadian city.

22. The Rogers Centre in Toronto is the first stadium in the world to have a fully retractable roof.

23. At Christmas time, Nathan Phillips Square in Toronto, holds a 60-foot Christmas tree that takes 2 weeks to decorate it with 12,000 LED lights and 700 ornaments.

24. There are around 160 completed skyscrapers in Toronto and 112 more are being constructed.

25. 56.7% of Torontonians are Christians, making Christianity the largest faith group in the city. Most of the Christian population in the city are Catholics.

26. The city of Toronto once had a crack-smoking mayor, former Mayor Rob Ford, whose career ended in a media frenzy when a video surfaced of him smoking crack cocaine.

28. Toronto has the world’s largest underground shopping complex, the PATH. It connects more than 70 buildings with 30 km of walkways and 371,600 m2 of retail space.

29. Toronto is the safest metropolitan area in North America. EIU has ranked 4th in the world, in terms of safety among other categories including, public transit and cleanliness.

30. Toronto was the first jurisdiction in North America to legalize Gay marriage, in 2003.

31. Little Italy, Little Portugal, and Chinatown in Toronto, all have dual-language street signs written in both English and a language other than French.

32. There is a house at St. Patrick Street, Toronto, that’s been sawed in half. You could walk by it 20 times and not notice, but once you do, it looks like an optical illusion.

33. In Toronto, there are multi-public toilets and washrooms beneath the streets, although they are no longer in use today.

34. The Toronto Islands comprises of the largest urban car-free community in North America.

35. The pacemaker, is a life-saving device created by Winnipeg engineer John Hopps, who developed the first cardiac pacemaker in 1950 at the Banting Institute in Toronto.

36. The Toronto Stock Exchange was created by 24 men in October 1861, with only 18 stocks listed at the time. Today, TSX is the seventh-largest exchange in the world.

38. One of Toronto’s main airport is named after a World War II pilot, William Avery Bishop, who was killed in an airplane crash near the city in 1940.

39. Toronto hosts one of the largest LGBT festivals in the world, ‘Pride Week’, which usually takes place in late June.

40. English is the predominant language spoken by Torontonians with approximately 95 percent of residents having proficiency in the language.

41. On August 14–17, 2003, Toronto was hit by a massive blackout that affected millions of Torontonians, stranding hundreds of people in tall buildings, knocking out traffic lights, and suspending subway and streetcar service across the city for those 3 days.

42. Toronto is one of the cities in North America that will host some games in the group stage of the 2026 FIFA World Cup.

43. Much of downtown Toronto was destroyed in the Great Fire of 1904.

44. When Hurricane Hazel struck Toronto in 1954, 81 people were killed, nearly 1,900 families were left homeless, and it caused more than CA$25 million in damage.

45. During the cholera outbreaks of 1832 and 1834, hundreds of Torontonians who perished from the disease were buried in a corner of the cemetery on Parliament Street.

46. In 2016, two capybaras (a mammal that resembles a giant long-legged guinea pig) made international headlines when they escaped from Toronto’s High Park Zoo.

47. There is a plaque at Maple Leaf Park at Hanlan’s Point in Toronto, that marks the hit performance of 19-year-old rookie, Babe Ruth, in the year 1914.

48. In the 1960s and 70s, many old buildings in Toronto were demolished to make way for new ones, sometimes called the “Manhattanization” of Toronto.

49. In 1841, Toronto had the first gas-lit street lamps in the country, which Charles Dickens noted when he visited.

50. Toronto was a candidate for the Olympics twice but has never hosted the event. It hosted the 2015 Parapan American Games, which was twice as large as the 2010 Olympics.

51. Toronto has been dubbed “Hollywood North” because so many movies are filmed there. Vancouver, which makes slightly more than Toronto, has the same nickname.

52. The 5 largest banks in Canada, nicknamed the “Big Five” (Royal Bank of Canada, Toronto-Dominion, Bank of Nova Scotia, Bank of Montreal, and CIBC) are headquartered in Toronto.

53. The University of Toronto was the site of the world’s first lung and nerve transplant and is ranked number 1 in Canada and 25th in the world.

55. Toronto is famous for its legal street arts and some of it is featured in its art show in Graffiti Alley.

56. Toronto also has the “Canada Walk of Fame”, which is similar to the “Hollywood Walk of Fame” in Los Angeles.

57. The Gardiner Museum in Toronto is Canada’s only museum dedicated entirely to ceramic arts. The city also has a museum for shoes, the Bata Shoe Museum.

59. It got so cold in the winter of 1912 in Toronto, that by mid-February Lake Ontario had completely frozen solid, and tree branches started exploding.

60. There was the Great Stork Derby in the city, a contest dreamed up by Charles Vance Millar, a Toronto lawyer that went on between 1926 and 1936, where women in Toronto competed to produce the most babies.

61. Toronto’s very first map was created by 13-year-old Alpheus Todd. He produced the map by walking through the streets and converting his paces into a scale.