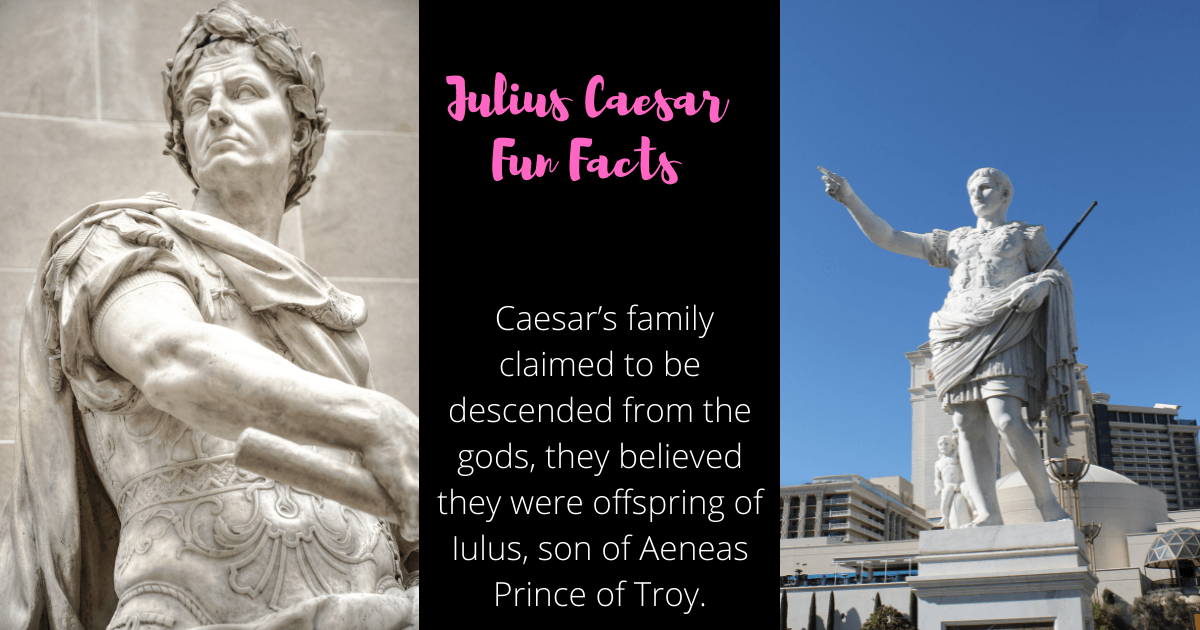 Gaius Julius Caesar was a Roman general and statesman who led the Roman soldiers to the Gallic Wars and defeated his political rival Pompey in the war. Do you know that Caesar’s family claimed to be descended from the gods? Continue reading this interesting and simplified story to get a fascinating and rich insight into the life, achievements, and death story of Julius Caesar.

Julius Caesar Facts About His Life

1. Julius Caesar’s two sisters both had the same name, Julia.

2. The Siege of Alesia in 52 BC was Caesar’s final victory before he died.

3. Debt might be one of the most important drivers of Caesar’s career because his conquests in Gaul were partly financially motivated.

4. Arguably his longest-lasting reform was when he adopted the Egyptian calendar.

5. His relationship with his lover, Cleopatra is considered one of the most famous love affairs in history.

6. Caesar’s successful election to the consulship is considered as one of the dirtiest elections Rome has ever had.

7. Caesar’s father was a powerful man who was governor of the province of Asia.

9. Caesar’s military career first started at the Siege of Mytilene in 81 BC.

10. When his father died suddenly in 85 BC, the 16-year-old Caesar was forced to go into hiding because of the new ruler Sulla who hated their family.

11. Caesar’s family claimed to be descended from the gods, they believed they were offspring of Iulus, son of Aeneas Prince of Troy.

12. In 49 BC, Caesar started a civil war by crossing the Rubicon River into northern Italy.

13. In 69 BC, Julius Caesar was appointed as a military tribune and then a traveling auditor of the Roman Empire.

14. Julius Caesar’s rule was among the pioneer process of turning ancient Rome from the republic it was into an empire

15. In 55 BC as he crossed and made his first expedition to Britannia, he came into Germany by crossing the Rhine.

16. Ever since he became a soldier, he was brave and was decorated with the Civic Crown after the siege of Mytilene.

17. It was after his enemy Sulla, the one that banished him out of Rome died, that Caesar felt safe enough to return home.

18. Caesar’s historical influence was greatly popularized by his writings particularly in his Commentarii de Bello Gallico.

19. Caesar expanded Rome’s territories, especially the rich lands of Gaul, which were a huge and valuable asset for the Empire.

20. Caesar was given divine status by the state and he became the first to be granted such status.

21. The ancient cities of Rome, Carthage, and Corinth were rebuilt because of the orders of Julius Caesar.

22. Julius Caesar lost some of his battles and was sometimes kicked around a bit, but he didn’t lose a single war throughout his life.

23. In 59 BC, Julius Caesar was consul, the highest political office than in the republic of Rome.

24. Julius Caesar’s most famous reform was the introduction of the Egyptian calendar also known as the Julian Calendar.

25. He invaded Britain twice during the Gallic Wars and installed a king there who was loyal to Rome

26. It was in the Great Roman Civil War, fought from (49–45 BC) that Caesar finally defeated his greatest enemy, Pompey.

27. Julius Caesar was the Pontifex Maximus, who is also known as the chief priest of Rome in 65 B.C.

28. Julius Caesar rose through the ranks of the society quickly to become Consul of Rome in 59 BC.

29. He expanded the Roman Republic all the way up into present-day Belgium.

30. Julius Caesar was the leading prose author and orator during his time because of his skill in it.

31. He was the one that initiated the integration of Roman territories which were outside Italy.

32. Julius Caesar is considered one of the greatest military commanders in the world and not only Rome.

33. Julius Caesar took several popular measures to eliminate the dominance of the rich and he was loved by the poor.

34. He took steps to mitigate the financial crisis in Rome by creating certain rules to protect the poor.

35. Julius Caesar is considered to be the most powerful man of his time in the Roman Republic.

36. In 65 BC, he was also the person responsible for maintaining the city and entertainment.

37. Many historians consider his conquest of Gaul as the greatest accomplishment he had as a soldier.

Julius Caesar Facts About His Death

38. The base of Curia of Pompey was the location where Caesar was killed.

39. According to historians, the killing of Caesar occurred primarily due to concerns that he will be the king of Rome.

40. The 22nd February, 44 BC was when the plan to assassinate Julius Caesar began with a meeting held by Cassius Longinus and Marcus Brutus.

41. Despite the killing of Caesar, the conspirators were not able to restore the government of the Republic.

42. Caesar named his grandnephew Gaius Octavius his only heir before he died, leaving him with lots of riches.

43. Calpurnia initially begged Caesar not to go to the senate meeting that day but he compromised after listening to bad advice.

44. Around 60 senators planned the conspiracy, headed by Marcus Brutus and Cassius Longinus.

45. Brutus planned that for the killing of Caesar to be considered legitimate, it had to include a large number of Rome’s prominent men.

46. On the 15th of March, 44 BC, Julius Caesar, the Roman dictator, was stabbed to death by a group of senators.

47. It was in the meeting of the Senate at the Curia of Pompey that the senators stabbed Caesar 23 times.

48. Because Anthony rejected their old conspiracy, the conspirators decided against recruiting Anthony to their side to avoid betrayal.

49. The conspirators chose the 15th of March as the day of the assassination because it was the last senate meeting at that time.

50. The aftereffects of the killing of Caesar escalated to the Liberators’ civil war and finally to the Principate phase of Rome.

51. The senators claimed that the reason why they killed Caesar was because of fears of barbaric use of power as Roman dictator.

Do you know that 300 bodies are frozen in liquid nitrogen in America with the hope of the possibility of science bringing them back to life? Check out 31 Unusual and mind-blowing Facts About Death.

52. Caesar’s last wife was named Calpurnia, and she was the daughter of another powerful Senator known as Piso.

53. Cleopatra, the popular Caesar’s lover, was the one that gave birth to Caesarion.

54. According to historians, the daughter of Caesar’s lover Servilia was Caesar’s biological daughter.

55. Pompeia, the one Caesar married, was ironically the granddaughter of Sulla, the same Sulla who was against the life of Caesar.

56. Eunoë, queen of Mauretania and wife of Bogudes, was also said to be the lover of Caesar.

57. Calpurnia, Caesar’s wife had dreamt when she was holding Caesar’s dead body in her arms and had begged Caesar not to go to the senate meeting the day when he died.

58. Caesar’s first marriage was to Cornelia, also known as Cinnilla, from 84 BC until she died around 69 or 68 BC.

59. Caesarion, who was the child of Cleopatra VII, was killed at age 17 by Octavianus, who was the adopted son of Caesar.

60. Caesar’s second marriage was to Pompeia, from 67 BC until he divorced her around 61 BC because of the Bona Dea scandal.

61. His third marriage was to Calpurnia, and they were married from 59 BC until his death.