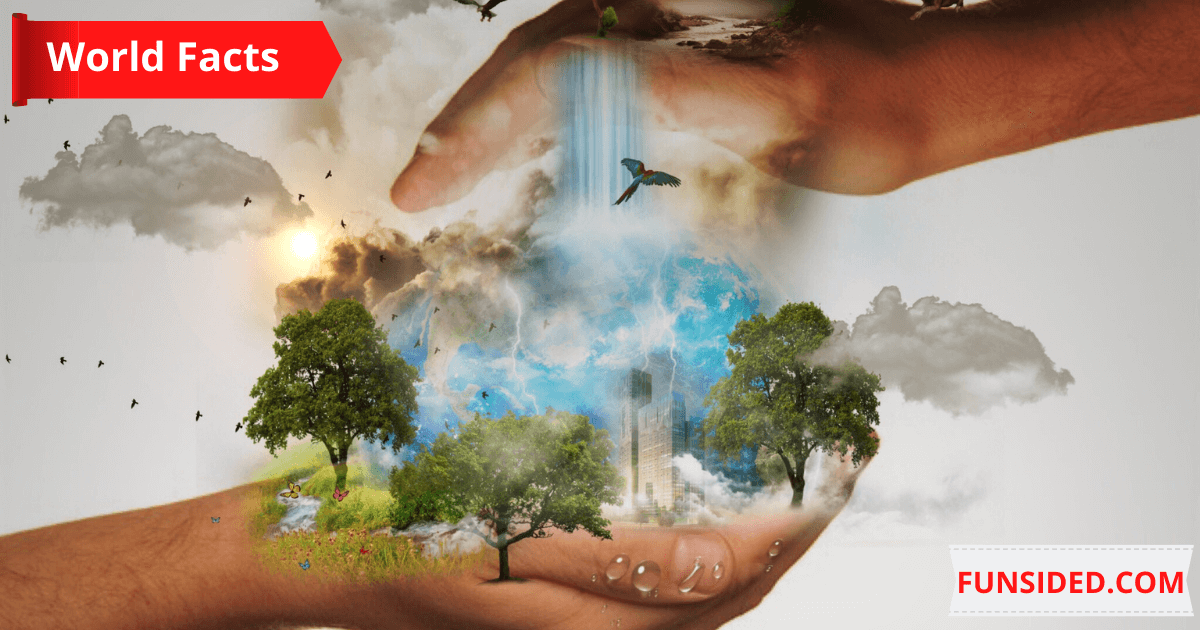 Do you know that the shortest flight in the world takes just 57 seconds to be completed? The world has an estimated population of over 7.5 billion varying from different continents of the world. However, it would interest you to know that there are so many things we don’t know about the planet we live and in the article below, we will be sharing some interesting, extraordinary, and mind-boggling world facts.

2. The fastest wind speed ever recorded on earth was 253 miles per hour. It occurred in 1996, off the coast of Barrow Island, Australia.

3. Still looking for the best place in the world to gaze at rainbows? Go to Hawaii

5. An increase in Ultra-Violet radiation due to deterioration of the ozone layer is believed to be causing flowers to change colors.

6. Weird but true, the only place in the world where you can’t purchase coca-cola is North Korea and Cuba due to the embargo placed on them by the US.

7. The Dragon’s breath Chili Pepper is the hottest in the world and it can surprisingly kill an individual.

8. Statistics suggest that the most visited country in the world is France according to the United Nations World Tourism Organization.

9. According to various research, it is believed that Indonesia is the home to the shortest people in the world. An average adult’s height in Indonesia is around 5 feet, 1.8 inches.

10.  About 69% of the world’s fresh water is held by Glaciers and ice sheets.

11. With over 150 million men and boys sharing the name Muhammad, it is regarded as the most popular name in the world.

12. The Olympics occur every four years but a record-breaking 92 countries participated at the PyeongChang 2018 Winter Olympics.

13. While some countries’ existence dates back to a thousand years or centuries, South Sudan in North Africa is the youngest country in the world having first gained independence in 2011.

14. Soccer remains the most-watched sport in the world and it unites different people across the globe despite their religion or tribe. An estimated half of the world’s population watched both the 2010 & 2014 FIFA World Cup in South Africa and Brazil respectively.

16. While cars and trains are the most used form of transportation in the world, Copenhagen ranks first as the most bike-friendly city in the world.

17. It would interest you to know that the world’s adult literacy rate is currently at 86%.

18. Given the remarkable rise in the use of social media over the last decade, Facebook currently has an estimated 2billion users, a figure more than the combined population of US, China and Brazil.

19. Despite having a total of 195 countries in the world, only two countries bear names that begin with the word “The” which are “The Bahamas and The Gambia”.

20. Whenever you want to take a dip in the ocean, you might want to have a rethink with research suggesting that an estimated 200,000 different viruses are domiciled in the oceans.

21. New Zealand is the home of pets in the world with over 68% of the households in the country possessing a pet.

22. With over 37 million people living in Tokyo, it is the largest city in the world in terms of population size.

25. Surprisingly, the famous Sahara desert was once a tropical rain Forest about 6,000 years ago.

26. One of the most fascinating faces of living in Hawaii is that you can enjoy both sunny beaches and Snowy mountains on the same island.

29. The deepest freshwater lake in the world is Lake Baikal and it has a mind-boggling depth of 5,315 feet and it’s located in Siberia.

30. An estimated one year and three half are what it takes to walk all the way along to the Great Wall of China.

31. With over 50,000 species of plants and trees in Brazil, the South American nation holds the record for the most Biodiversity of any country in the world.

32. The most populous nation in the world is China with an estimated figure of 1.4 billion.

33. Funny but true, ancient Egyptian police officers often use dogs and trained baboons to help them on their jobs.

34. Looks unbelievable, but the youngest mom in the world was Lina Medina who was just 5 years old when she gave birth to her son.

35. Iceland is gradually growing by 5cm per year.

36. Due to different time zones in Russia, a good morning text message is equivalent to a good night message in another.

37. It is believed that Mexico City is sinking by an estimated 3.2 feet annually.

38. Provided humans are still very much alive in the next 15 million years, Los Angeles and California will be neighbors.

39. The Sargasso Sea is the only sea in the world that doesn’t have a coastline and it’s found in the Atlantic Ocean.

41. The home of caves is believed to be in Kentucky.

42. Due to its gigantic landmass, Alaska is believed to be the home to the largest cities in the US.

43. The deepest place in the world is the Pacific Ocean with a jaw-dropping depth of over 35,814 feet.

45. Due to the high number of skyscrapers in New York, it would interest you to know that a total of 42 buildings have their own zip codes.

46. With over 1000 miles from any land, Point Nemo is the most remote place in the world.

47. Over 20% of the oxygen we often use in the world is generated by the Amazon.

48. Hard to explain but it takes a whopping 90 days for a drop of water to travel the Mississippi River.

50. Due to its high concentration of salts than the oceans and seas on earth, the Dead Sea creates an avenue for you to float rather than sinking.

51. The shortest town name in the world consists of just one word. A good example is a village in France called “Y”.

52. Surprisingly, the country with the longest name is the UK and the full name is  “the United Kingdom of Great Britain and Northern Ireland”, which consists of 56 characters.

53. Despite having a lot of languages in the world, a certain country called Papua New Guinea has 840 languages.

55. The hottest temperature ever recorded occurred in 1913 in California Death Valley at a degree of 134°F.

56. Lions are believed to be extinct in 26 countries in Africa.

58. There is enough amount of Gold in the world to cover itself in Glory.

59. Germany ranks first in terms of the highest rock museums.

60. Their love for crickets says it all as India can boast of the world’s highest cricket ground. Founded in 1893, the Chail Cricket Ground is approximately 8,019 feet above the sea in Himachal Pradesh.

61. The shortest flight in the world takes just 57 seconds to be completed between Westray and Papa Westray in Scotland provided the weather is favorable.

Do you find these world facts interesting? Leave a comment below and share if you like the content. Do you know that octopuses have three hearts and their blood is blue in color? Click here to check out more Surprising  Ocean facts.