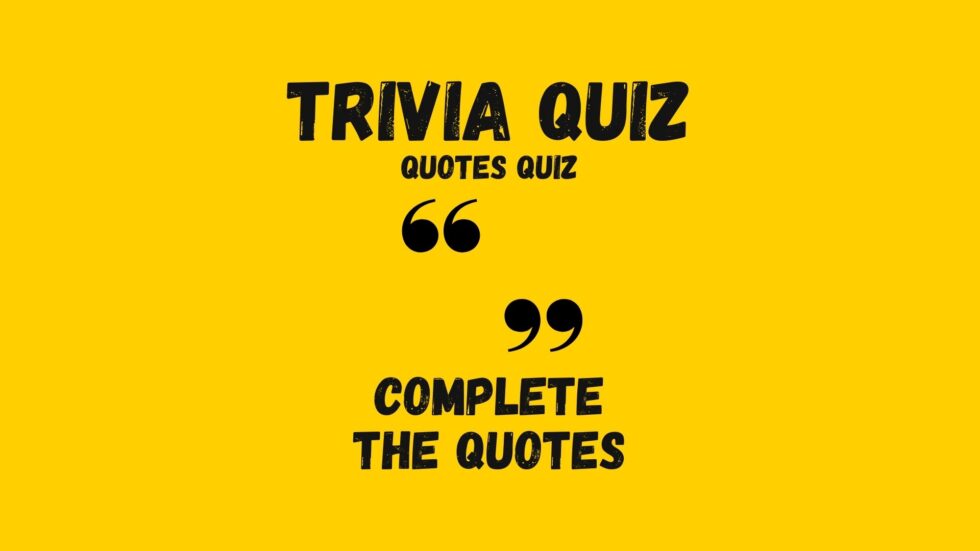 “All’s well that ends well”. This is a well-known quote by the famous British playwright, William Shakespeare. How many more of these famous quotes are you familiar with? Do you know how these quotes came about? Do you know the brains behind these quotes?

These Quotes Trivia Questions is a compilation of famous quotes which include quotes from celebrities, politicians, historical figures, philosophers, and scientists alike! Some of these quotes might be a piece of cake for you, while some of them may be a really hard nut to crack. But most times, the clue is in the question! Why don’t you go ahead and try this fun quiz and see what you’ve got?!

1. Who said this: “The greatest glory in living lies not in never failing, but in rising every time we fall”?
Answer: Nelson Mandela.

2. Which Chinese philosopher is credited for saying, “The journey of a thousand miles begins with a step”?
Answer: Lao Tzu.

3. Who said this: “That which does not kill us makes us stronger”?
Answer: Friedrich Nietzsche.

4. What is John Lennon’s most famous quote about life?
Answer: “Life is what happens to you when you’re busy making other plans”.

5. Who said, “When the going gets tough, the tough get going”?
Answer: Joe Kennedy.

6. Complete this famous quote by Mahatma Gandhi: “Be the change you wish to see…”
Answer: “…in the world.”

7. “I think, therefore I am”, is a famous quote from which French philosopher?
Answer: Rene Descartes.

8. What famous quote from Stephen King is adapted from his book: “Shawshank Redemption: A Story from Different Seasons”?
Answer: “Get busy living or get busy dying”.

10. Which English poet said this: “Tis better to have loved and lost than to have never loved at all”?
Answer: Alfred Lord Tennyson.

11. Which famous fashion designer said this well-known quote? “A girl should be two things: classy and fabulous.”
Answer: Coco Chanel.

12. Which famous quote originated in “Advice to a Young Tradesman”, an essay by Benjamin Franklin?
Answer: “Time is money”.

14. “If you’re going through hell, keep going”. Who said this?
Answer: Winston Churchill.

16. “I came, I saw, I conquered”, is a famous quote by which Shakespearean character?
Answer: Julius Caesar.

17. Who said, “An eye for an eye only ends up making the whole world blind”?
Answer: Mahatma Gandhi.

18. “Twenty years from now you will be more disappointed by the things that you didn’t do than by the ones you did do”. Who said this?
Answer: Mark Twain.

19. “Give a girl the right shoes and she can conquer the world”. Which famous American actress from the 1950s said this?
Answer: Marilyn Monroe.

21. “Those who dare to fail miserably can achieve greatly”. From which former US President does this admonition originate?
Answer: John F. Kennedy.

22. Who said this, “When life gives you lemons, make lemonade”?
Answer: Elbert Hubbard.

23. “Never let the fear of striking out keep you from playing the game”. This famous quote is by which acclaimed baseball plyer?
Answer: Babe Ruth.

25. “Life is ten percent what happens to you and ninety percent how you respond to it”. Who said this?
Answer: Charles Swindoll.

26. Complete this quote by RalphWaldo Emerson: “A great man is always willing to be …?
Answer: Little.

27. “Every man is guilty of all the good he did not do”. Which French writer said this?
Answer: Voltaire.

28. Who is the former Lord Chancellor of England that said the famous quote, “Knowledge is power”?
Answer: Sir Francis Bacon.

29. “In three words I can sum up everything I’ve learned about life: It goes on”. Which American poet said this?
Answer: Robert Frost.

30. “If you judge people, you have no time to love them”. Which famous Catholic nun and missionary said this?
Answer: Mother Teresa.

31. “The future belongs to those who prepare for it today”. Who said this famous quote?
Answer: Malcolm X.

32. Complete this quote by Franklin Roosevelt: “When you reach the end of your rope…”?
Answer: “…tie a knot in it and hang on”.

33. “No one can make you feel inferior without your consent”. This very famous inspirational quote is from who?
Answer: Eleanor Roosevelt.

34. “In the long run, the sharpest weapon of all is a kind and gentle spirit”. Who said this?
Answer: Anne Frank.

35. Which American author said the popular quote, “Sing like no one’s listening, love as you’ve never been hurt, dance like nobody’s watching, and live like its heaven on earth”.
Answer: Mark Twain.

36. Which US President said, “Do what you can, with what you have, where you are”.
Answer: Teddy Roosevelt.

37. “People are just as happy as they make up their minds to be”. This quote is by which famous politician and philosopher?
Answer: Abraham Lincoln.

38. “Remember that the happiest people are not those getting more, but those giving more”. Who said this?
Answer: H. Jackson Brown, Jr.

39. Complete this quote by Benjamin Disraeli: “Hope for the best, but…”?
Answer: “…prepare for the worst.”

40. “Insanity is doing the same thing over and over again and expecting different results”. Which German scientist said this?
Answer: Albert Einstein.

41. “Simplicity is the ultimate sophistication.” This quote is by a very renowned Italian painter. Who is he?
Answer: Leonardo da Vinci.

42. “Everything you’ve ever wanted is on the other side of fear”. Who said this?
Answer: George Adair.

43. Which famous English poet and playwright said, “Love all, trust a few, do wrong to none.”
Answer: William Shakespeare.

44. Which cartoonist said, “Yesterday is history, tomorrow is a mystery, today is a gift of God, which is why we call it the present”?
Answer: Bil Keane.

45. Which American preacher said, “Our greatest fear should not be of failure but of succeeding at things in life that don’t really matter”?
Answer: Francis Chan.

47. “Be yourself; everyone else is already taken”. This famous quote is by an Irish poet. Who is he?
Answer: Oscar Wilde.

49. Complete this quote by Ralph Waldo Emerson: “Do not go where the path may lead; go instead where…”?
Answer: “…there is no path and leave a trail”.

50. “Nothing is impossible, the word itself says, ‘I’m possible!’” Which famous actress made this quote about self-confidence?
Answer: Audrey Hepburn.

51. Who is the boxing champion that said, “Don’t count the days, make the days count”?
Answer: Muhammad Ali.

52. In which book series by J.K. Rowling will you find the quote, “It is our choices, that show what we truly are, far more than our abilities”?
Answer: Harry Potter.

55. Complete this quote by Malcom X: “If you don’t stand for something…”?
Answer: “…you will fall for anything”.

56. “In order to write about life first you must live it”. Who said this?
Answer: Ernest Hemingway.

57. “Turn your wounds into wisdom”. This quote is attributed to which US talk show host?
Answer: Oprah Winfrey

59. “The pen is mightier than the sword.” Which British politician said this?
Answer: Edward Bulwer-Lytton.

60. Which ancient Greek philosopher said, “Necessity is the mother of invention”?
Answer: Plato.

61. “All’s fair in love and war.” This quote is by which British writer?
Answer: John Lyly.

62. “Slow and steady wins the race.” From where does this proverb originate?
Answer: Aesop fables.

63. “Spread love everywhere you go. Let no one ever come to you without leaving happier.” Who said this?
Answer: Mother Teresa.

65. Which American country singer said, “The way I see it, if you want the rainbow, you gotta put up with the rain”?
Answer: Dolly Parton.

66. “Our lives begin to end the day we become silent about things that matter.” Who said this?
Answer: Martin Luther King Jr.

69. Who said, “Walking with a friend in the dark is better than walking alone in the light”?
Answer: Hellen Keller.

70. “In politics, stupidity is not a handicap.” Who is the famous French Emperor that said this?
Answer: Napoleon Bonaparte.

71. Which former British Prime Minister said, “A lie gets halfway around the world before the truth has a chance to get its pants on”?
Answer: Winston Churchill.

Hope you enjoyed this fun quotes trivia quiz of the day, please leave a comment and share it with your family and friends. Which bird was once used to deliver Olympics results in Ancient Greece? Check out the answer and more 87 Fun Random Trivia Questions and Answers.