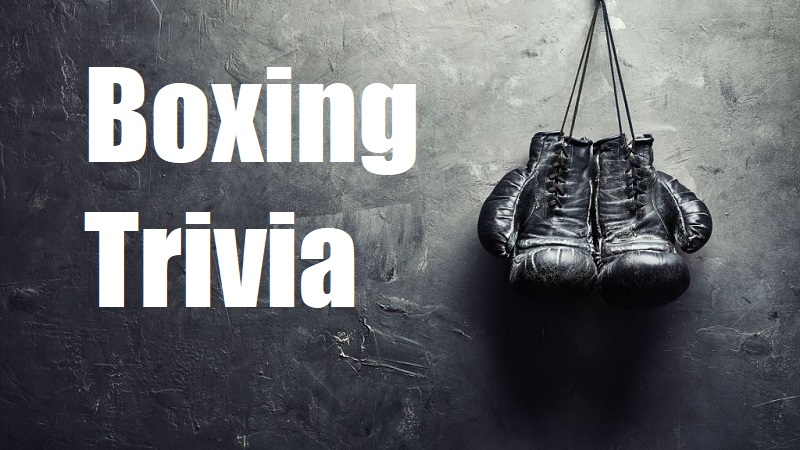 Do you remember the famous Rumble Jungle fight? And the legends of Mayweather and Muhammad Ali? If you’re a boxing fan and you’re into the fist-fighting game, then this is the right place for you to gather now!

This trivia game is packed with some of the most interesting trivia about the world’s most popular combat sport, from its early beginnings all the way down to the famous legends of the game, epic fights, championship title winners, and even the nicknames that some of your favorite fighters have been popularized with. Even if you haven’t watched a boxing fight before, you might be able to get one of the questions right. So scroll down and start already!

1. The earliest documented history of boxing goes as far back as?
Answer: 3000 BC in Egypt.

2. The first Code of Rules in the history of boxing was written in what year?
Answer: 1743.

3. What was the official name of boxing and what does it mean?
Answer: Pugilism, meaning, “practice and skills of fighting with fists.”

4. Where is the birthplace of boxing?
Answer: Ancient Greece

6. Which Greek god was believed to be the creator and guardian of boxing?
Answer: Apollo.

7. In what year was women’s boxing first featured in the Olympic Games?
Answer: 2012

8. Which boxer is considered the most feared boxer of all time?
Answer: Sonny Liston.

9. He is a British-born fighter and a Nigerian, a two-time former unified world heavyweight champion, and the second British boxer, after James DeGale, to win both a gold medal at the Olympics and a world title by a major professional sanctioning body, as well as the first British heavyweight to do so. Can you say his full name?
Answer: Anthony Oluwafemi Olaseni Joshua.

10. What is the measurement of a professional boxing ring?
Answer: It is usually 20 feet x 20 feet and 4 feet high.

11. When was the National Boxing Association (NBA) established?
Answer: 1927

12. What word is used to describe the type of punch in boxing that is comprised of an upward blow from the direction of your toes?
Answer: Uppercut

13. Which boxing champion is considered the father of modern boxing?
Answer: Jack Broughton, the reigning champion from 1734 to 1758

14. Who is considered by many as the best boxer in the history of the sport with a boxing record of 50-0 win-loss status, and the nickname ‘Pretty Boy’ due to his incredible defensive techniques, which resulted in him receiving far fewer scratches, cuts, and bruises on the face?
Answer: Floyd Mayweather.

16. In what year did boxing become more prominent in the USA?
Answer: The early 20th century.

17. What do we call the trainer or coach who assists the fighter during a boxing fight?
Answer: A cornerman.

18. Which famous boxer has the most wins in boxing history, with 339 triumphs?
Answer: Len Wickwar.

19. The very first rules of boxing were also set by who?
Answer: Jack Broughton.

20. Who is the boxer with the fastest hands?
Answer: Floyd Mayweather

21. A boxing champion who defeats an existing champion is known as?
Answer: A lineal Champion.

22. A TKO is called when a fighter is knocked down how many times?
Answer: 3 times

23. How long is the countdown for a fighter to get back up after being knocked down in a boxing contest?
Answer: A count of 10.

24. What is the name of the heaviest weight class in boxing?
Answer: Featherweight.

26. Where and when did the first recorded boxing match take place?
Answer: In Britain, on 6 January 1681.

27. To stop a fight, what can a corner man throw into the boxing ring?
Answer: A towel.

28. What does the term “TKO” stand for in boxing?
Answer: Technical knockout.

29. Who was the first winner in the Olympic boxing of Ancient Greece?
Answer: Onomastus

30. How many minutes are there in a boxing round?
Answer: 3 minutes

31. What is the most expensive fight that has ever taken place in the history of boxing?
Answer: It was between Floyd Mayweather and Manny Pacquiao on May 3, 2015.

32. The shortest boxing match which lasted for only 4 seconds was between which fighters?
Answer: Michael Collins and Pat Brownson.

33. What is the name of the American fighter who is the World’s Youngest Boxing Champion ever?
Answer: Wilfred Benitez.

34. What makes bare-knuckle boxing less dangerous than boxing with gloves?
Answer: Gloves were introduced to increase the number of knockouts by adding weight to the punch.

35. How old was George Foreman when he became the oldest heavyweight champion?
Answer: 45

36. In the WBC and WBA, which weight class comes before heavyweight?
Answer: Cruiserweight.

37. Which part of the body is not a target in boxing?
Answer: Below the belt.

38. What do boxers use the mouth guard for?
Answer: To protect the fighters’ teeth during fight sessions.

39. Which rules were drafted in 1865 and are still the code of generally accepted rules in boxing?
Answer: The Marquess of Queensberry Rules.

40. In 1986, who became the youngest fighter to win the heavyweight championship?
Answer: Mike Tyson.

41. During a match known as “The Bite Fight”, which part of Evander Holyfield’s body did Mike Tyson bite?
Answer: His ear.

42. What do we call the result in which judges are not unanimous on the fight’s winner?
Answer: A split decision.

43. What happened with the British boxer Robin Deakin who won the first professional fight in 2006?
Answer: He lost the next 50 fights.

44. At what age did George Foreman become the oldest heavyweight champion?
Answer: 45.

46. In 2005, which British boxer was named Ring Magazine’s ‘Fighter of the Year’ – the first British boxer to be awarded the title since its 1928 inception?
Answer: Ricky Hatton.

47. What animal-inspired name is given to a punch delivered on the back of the boxer’s neck?
Answer: Rabbit Punch.

48. What is the name of the well-known American boxing manager and trainer who handled the careers of Mike Tyson, Floyd Patterson, and others?
Answer: Constantine “Cus” D’Amato.

49. Which boxing bout was known as the greatest sporting event of the 20th century?
Answer: “The Rumble in the Jungle” between Muhammad Ali vs George Foreman.

51. Which American professional boxer’s successful title defense against Jack Dempsey remains one of the most famous bouts in boxing history and is known as ‘The Long Count Fight’?
Answer: Gene Tunney.

52. Which legendary boxer got his nickname when his trainer once said “Go out there goddammit and make smoke come from those gloves?”
Answer: “Smokin’ Joe” Frazier.

53. What are the names of “The Four Kings”, a group of boxers who all fought each other throughout the 1980s?
Answer: Roberto Durán, Thomas Hearns, Marvin Hagler, and “Sugar” Ray Leonard.

54. Nicknamed the ‘Brown Bomber’, which legendary boxer had the longest single reign as champion in boxing history?
Answer: Joe Louis.

55. Nicknamed the “Easton Assassin”, who is the only boxer still alive in 2022 to have defeated Muhammad Ali?
Answer: Larry Holmes.

56. Which boxing technique was popularized by Muhammad Ali in his October 1974 Rumble in the Jungle match?
Answer: The Rope-a-dope.

57. What is the name of the British dentist who invented the reusable mouth guard?
Answer: Jack Marles.

58. According to the Guinness World Records, the shortest boxing match lasted for only 4 seconds. Where and when did it take place? And who were the fighters?
Answer: November 4, 1947, in the USA between Michael Collins and Pat Brownson.

59. How long did the longest boxing match last? How many fighting rounds were in it?
Answer: It lasted for 7 hours with 110 rounds in total. The match was eventually drawn as a tie.

60. A hybrid sport, which is a combination of chess and boxing, where players rotate between chess and boxing rounds until a winner is declared by checkmate, knockout, or technical stoppage. What form of sport is this?
Answer: Chess-boxing.

62. Women’s amateur boxing follows the same regulations as men’s boxing. What is the biggest difference between them?
Answer: The women’s rounds are shorter, and they wear breast protectors.

63. What was Muhammad Ali’s “no-sex” rule about?
Answer: He would go for almost two months without sleeping with his wife before a fight. He believed that saving energy and testosterone made him invincible in the ring

64. What is the name of the 22-year-old who died in a fight with Sugar Ray Robinson in 1947, and was the first boxer to die in a world championship fight since the 1800s?
Answer: Jimmy Doyle.

66. What is the most common risk health factor among professional boxers?
Answer: Brain concussions.

68. What was the fourth most popular sport in the US, behind football, basketball, and baseball?
Answer: Boxing.

69. With a crowd of over 73,000 people in attendance, which boxing fight attracted the largest boxing crowd in US history? Where did it take place?
Answer: The fight between Canelo vs Saunders at the AT&T Stadium in Texas on May 8, 2021.

70. Who is the richest boxer in the world and how much is he worth?
Answer: Floyd Mayweather, with a net worth of $450 million.

71. Who is the UK boxer that holds the record for the boxer with the most KOs?
Answer: Billy Bird.

Did you enjoy these fun boxing trivia questions? Please leave a comment below and share if you like the content. Do you know that Wife Carrying is a sport?  Check out 30 weird sports around the world and 86 Fun Sports Trivia Questions and Answers