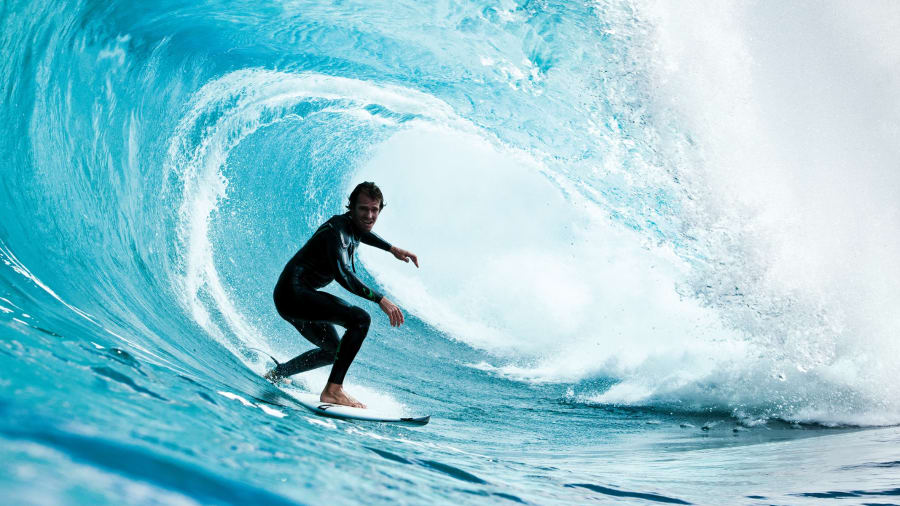 Many surfers claim to have a spiritual connection with the ocean, describing surfing, the surfing experience, both in and out of the water, as a type of spiritual experience or religion.

What about you? What does surfing mean to you? Are you a lover of the water sport or just an observer by the side, who thinks more about the dangers of the sport rather than its beauty of it? This interesting surfing trivia is specially created for you to discover and test your knowledge of the rules and history of the fun game.

1. Where is the most popular surfing spot in the world?
Answer: Hawaii

2. What is the name of the Hawaiian surfer who introduced surfing to the rest of the world?
Answer: Duke Kahanamoku

3. In ancient times, what did the Hawaiians surf with?
Answer: Crude boards that were cut and shaped from trees.

4. Although Hawaiians provided the soul of surfing, which state of the world is credited with providing the technological advances that enabled the sport spread into the world?
Answer: California

5. What does “he’enalu” mean in Hawaii?
Answer: It refers to surfing and interprets as “wave sliding.”

6. Asides from being a recreational activity and sport, what does surfing mean to Hawaiians?
Answer: For Hawaiians, surfing was a central part of their religion and culture.

7. According to the Guinness World Records, the largest wave surfed was achieved by a Brazilian named, Rodrigo Koxa , in the waves of Nazaré, Portugal, in 2017. How high were the waves?
Answer: 80 feet high.

9. In 2016 surfing was added as an Olympic sport to begin at the 2020 Summer Olympics in Japan. Unfortunately, this event did not hold. Why?
Answer: As a result of the Coronavirus pandemic.

10. Which two countries of the world offer the best surfing conditions?
Answer: USA and Australia.

11. What are the two main versions of surfing?
Answer: Short-boarding and Long-boarding

12. The kind of waves suitable for surfing are primarily found where?
Answer: In the ocean

13. Where did the first major surf competition take place and in what year?
Answer: Corona del Mar, California. 1928

14. What do surfers call it when they get completely covered up by the breaking curl of the wave?
Answer: Tubed

15. What are the three types of breaks there are in surfing?
Answer: Beach breaks, Reef breaks, and Point breaks.

16. In what year did professional surfing contests start?
Answer: 1975

17. Known as the richest surfer there is today, and the first professional surfer to earn a million dollars. What is the name of this man?
Answer: Kelly Slater

18. What is the Beaufort Scale used to measure?
Answer: It measures the wind speed

19. Known as one of the best and most famous surf spots in the world, where is the famous ‘Pipeline’ situated?
Answer: Hawaii

20. Falling off a surfboard or colliding with others is commonly referred to as?
Answer: A wipeout.

21. What does the bodyboarding move ARS stand for?
Answer: Air Roll Spin

23. What is another way to ride a bodyboard other than lying down?
Answer: Drop Knee

24. What kind of shark is most likely to attack surfers in Hawaii?
Answer: Tiger Sharks

25. What is the surfing term for a wave that is too small to ride?
Answer: Ankle Slappers

26. What is the most important factor in influencing the shape of a wave?
Answer: Wind speed

27. What is the world record for most people riding the same surfboard?
Answer: In March 2005, 47 surfers rode a board measuring 39 feet in Australia.

28. Which city in the United States is known as ‘Surf City’?
Answer: California

29. What does IBSA stand for?
Answer: International Boardsailing Association

30. Rolling Stones is not only a rock and roll band it’s also a surf break in which part of the world?
Answer: New Zealand

31. What are the most common causes of drowning while surfing?
Answer: Hold-downs, getting trapped on the reef, being separated from your board and not being able to swim in, and unconsciousness through a collision.

32. What do you call a surfer that rides with his right foot forward?
Answer: Goofy

33. What is the name of the international bodyboard manufacturer in Australia, that names their bodyboards after a sea creature?
Answer: Manta.

34. What is the popular term for the sides of a bodyboard called?
Answer: Rails

35. How many world championship titles have the surfing champion Kelly Slater won to his credit?
Answer: 11

36. How many surfers are said to have lost their lives at Hawaii’s Pipeline?
Answer: 14

37. According to the Guinness World Records, the longest wave ride on a tidal bore was 10.6 miles. What is the name of the Australian surfer who hit this milestone?
Answer: James Cotton. He surfed on the Bono river bore on the Kampar River in Indonesia in 2016.

38. The largest collection of surfboards was made by a Hawaiin named Donald Dettloff. How many were they?
Answer: 647

39. Which canine animal can surf?
Answer: A dog.

40. What is the record-breaking fact about the Australian Kelpie rescue dog called Abbie Girl?
Answer: In 2011, she surfed the longest wave at the Surf City Surf Dog event in San Diego, California.

41. They were four professional wave surfers who died between 2011 and 2017. What are their names?
Answer: Sion Milosky, Kirk Passmore, Alec Cook, and Zander Venezia.

42. There is an ailment common among surfers where the bone near the ear canal grows after repeated exposure to cold water, making the ear canal narrower, and thus makes it harder for water to drain from the ear. What is this condition called?
Answer: Surfer’s ear

43. As a surfer, how can you protect your ear from getting a ‘surfer’s ear?
Answer: By the use of ear protection such as ear plugs.

44. What is the estimated number of deaths per year related to surfing?
Answer: The number is never more than around 10 surfing-related deaths per year.

45. What is the oldest foundation associated with surfing?
Answer: International Surfing Association (ISA)

46. What is the average percentage of men and women who surf?
Answer: Women accounted for 19%, while 81% were men.

49. Considered a pioneer for women surfers, she was one of the first people inducted into the International Surfing Hall of Fame and the only surfer to win the title of the Los Angeles Times “Person of the Year”. Who was she?
Answer: Joyce Hoffman.

51. In the surfing world, “men in grey suits” refers to what?
Answer: Sharks

52. Which countries have the largest number of shark attacks each year?
Answer: The United States, followed by Australia and South Africa.

53. Asides from being the youngest ASP World Tour surfing Champion at the age of 20, Kelly Slater is also the oldest to win the title. How old was he when he won as the oldest man to receive the title?
Answer: 39 years old

54. Fifty-year-old surfer Kurtis Loftus holds the record for the “Longest Surfing Marathon.” How long did he surf?
Answer: He surfed 29 hours and 1 minute at Jacksonville Beach, Florida, on October 26–27, 2011.

55. What is the word used to refer to an inexperienced surfer or someone who needs more practice in surfing?
Answer: A barney

56. In one of the more gruesome surfing injuries, he barely escaped with his life in 1997 when the nose of his board cut 6 inches into his stomach and snapped off. The cut was so deep that his intestines spilled out. He needed 40 stitches and spent 3 months out of the water. What is the name of this former world champion?
Answer: Martin Potter

57. In 1992, what did the first recorded use of the word “surfing” describe?
Answer: It was used as a way to describe exploring the Internet.

58. By what standards are dogs judged at the Annual City Surf Dog contest?
Answer: Dogs are judged based on their confidence in riding a wave and how long they stay up.

59. Name the two movies that helped catapult surfing into popularity.
Answer: Gidget (1959) and The Endless Summer (1966)

60. What is the name of the university in the UK that offers a Surf Science and Technology degree?
Answer: Plymouth University.

64. Which other types of surfing do wave surfers resort to when the waves are flat?
Answer: Sidewalk surfing, which is now called skateboarding

65. What is the most dangerous and hazardous thing to a surfer while surfing the waves?
Answer: Under the wrong conditions, anything that a surfer’s body can come in contact with is a potential hazard, including sand bars, rocks, small ice, reefs, surfboards, and other surfers.

67. An area with an obstruction or an object that causes a wave to break is known as?
Answer: A surf break

68. Who is a surfer’s skill tested?
Answer: Surfers’ skills are tested by their ability to control their board in difficult conditions, ride challenging waves, and execute maneuvers such as strong turns and cutbacks.

69. What is the ultimate wave maneuvering technique in surfing?
Answer: The tube ride

70. What is a “flat spell”?
Answer: A flat spell occurs when there are no waves available for surfing.

71. What surfing-related sports do not require waves?
Answer: Paddle boarding and Sea kayaking

Did you enjoy these fun surfing trivia questions? Please leave a comment below and share if you like the content. Do you know that Wife Carrying is a sport?  Check out 30 weird sports around the world and 86 Fun Sports Trivia Questions and Answers