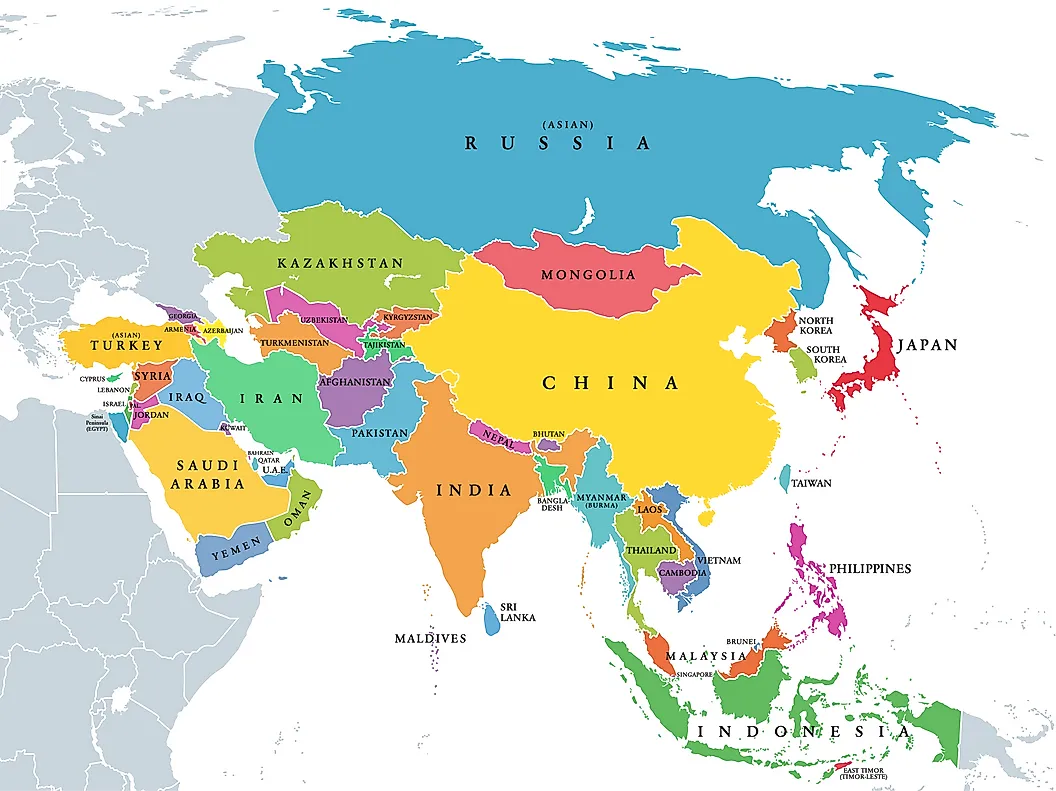 71 ASIA TRIVIA QUESTIONS AND ANSWERS
As the largest, biggest, and most populous continent on the planet, Asia is likely to hold more of everything, right? Did you know that the number of Japanese at the age of 90 in 2019 reached 2.31 million? Plus, there were over 71,000 centenarians!

Here, you’d find the worst air pollution in the world and of course the weirdest traditions and cultures too, like The Snake Wine, a type of liquor prepared by putting an entire snake inside a jar of rice wine. Look at that!

Regardless, we love Asia and all the beauty and goodness it offers. And if you want to know more, then try our fact-packed Interesting Asia Trivia Questions and Answers and see how much you know.

1. According to the United Nations, how many countries make up the continent?
Answer: 48.

2. Spoken by a massive 51% of Asia’s entire population, what is the most widely spoken language in Asia, as well as in the world?
Answer: Mandarin Chinese.

3. Which Asian country is the most populated country in the Asian continent and in the world?
Answer: China.

4. In which Asian country is Mount Everest, the highest mountain in the world, located?
Answer: Nepal.

5. Which set of Asian people are escaping death longer than any other group of people on the planet, with an average of 84 years in life expectancy?
Answer: The Japanese.

7. What is the largest religious monument in the world that is found in Cambodia?
Answer: The Angkor Wat Temple.

8. Although Asia is home to many of the tallest buildings in the world, which one of them surpasses the others in height and is the number one tallest in the world?
Answer: Burj Khalifa, Dubai.

9. Which 3 Asian countries have the highest average IQ on the planet?
Answer: Singapore, South Korea, and Japan.

10. Which city in Asia has the most population?
Answer: Tokyo.

11. Which country is the only carbon-negative country in the world with a pioneering government that does not place economic growth as the most important goal, Instead, they consider ‘Gross National Happiness (GNH) as their guiding principle?
Answer: Bhutan.

12. Thetownthat holds the Guinness World Record of the longest place name in the world consists of a whopping 168 letters. In which country is this city found?
Answer: Bangkok.

13. Which Asian country is the only country in the world that does not have a rectangular-shaped flag?
Answer: Nepal.

14. What two shapes sit on top of each other to form the Nepalese flag?
Answer: Triangles.

15. What are the two most widely practiced religions on the Asian continent?
Answer: Hinduism and Islam.

16. Just as the Christians go to Jerusalem for pilgrimage, which places in Saudi Arabia do Muslims believe to be the birthplace of the Prophet Mohammed and is the holiest place on Earth for Muslims?
Answer: Mecca (or Makkah).

17. Which country in Asia is the only country in the world that has a building featured on its flag?
Answer: Cambodia.

19. Two of the Seven Wonders of the World are located in Asia. What are they?
Answer: The Taj Mahal of India and the Great Wall of China.

20. Which country’s official name in Hindi is Bharat?
Answer: India.

22. Which present-day Asian country used to be known as Persia?
Answer: Iran.

23. Which sheikhdom is the capital of the United Arab Emirates?
Answer: Abu Dhabi.

24. What is the name of the world’s tiniest mammal which is found exclusively in Thailand and measures 1 cm in length?
Answer: The Kitti’s hog-nosed bat or The Bumblebee Bat.

25. Rafflesia Arnold, found in Indonesia, is the largest flower in the world. Its most distinctive feature is its smell of it. What does it smell like?
Answer: Rotten flesh (A corpse).

26. In which country can you find the harbor city of Mumbai?
Answer: India.

27. What world title does Vietnam’s Son Doong claim for itself?
Answer: The world’s largest cave.

29. Which country in Asia does the famous dog breed, ‘Afghan hound,’ come from?
Answer: Afghanistan.

30. What happened in the Lebanese capital city in 2020, that earned the city the one with the biggest non-nuclear explosions ever?
Answer: The Beirut Blast.

31. In which Asian country will you find Taipei 101, the building that used to be the tallest in the world until the completion of Burj Khalifa?
Answer: Taiwan.

32. What digit is considered unlucky in Mandarin Chinese, because it rhymes with the Chinese word for death?
Answer: 4.

33. What food is so important on the Asian continent that 90% of it that the world makes is consumed in Asia?
Answer: Rice.

34. Which Asian country makes their chopsticks with metal?
Answer: Korea.

35. Which country in Asia is the most heavily bombed country on earth?
Answer: Laos.

36. Which earthquake on the Asian continent caused the worst tsunami in living history (also known as the Boxing Day Tsunami)?
Answer: The 2004 Indian Ocean Earthquake.

37. How many transcontinental countries are there in Asia(i.e. countries that lie partly in Europe and partly in Asia)?
Answer: 5.

38. Except for medical prescriptions, which Asian country has a strict ban on chewing gum?
Answer: Singapore.

39. Located between Israel and Jordan in Southwest Asia, this place lies 427 meters below sea level and is the lowest point on the surface of the Earth. What is it?
Answer: The Dead Sea.

40. Which Asian country produces the most mangoes in the world with over 20 million tonnes of mangoes produced every year?
Answer: India.

41. The Leshan Giant Buddha is the biggest Buddha statue in the world. Where is it located?
Answer: China.

42. Which lake in Russia is the oldest and deepest lake in the world, with a maximum depth of 1,642 meters, and is also the largest freshwater lake in the world by volume?
Answer: Lake Baikal.

43. Which Filipino city is the world’s most densely populated city?
Answer: Manila.

45. Which Hindu social system is divided into Brahmins, Kshatriyas, Vaishyas, and Shudras?
Answer: The Caste System.

46. Which Asian country was formerly known as ‘Siam?’
Answer: Thailand.

47. Which city meaning “Muddy Confluence” is the capital of Malaysia?
Answer: Kuala Lumpur.

48. Which European King was the Philippines named after?
Answer: King Philip II of Spain.

49. What is the name of the cold desert that is the largest desert on the Asian continent?
Answer: Gobi Desert.

50. Which Asian country is the only Southeast Asian country that has never experienced European colonization, and thus earned them a name that means “land of the free”?
Answer: Thailand.

51. Which Japanese hotel is the first and the only hotel in the world that is entirely made up of robot staff?
Answer: The Henn-Na Hotel.

52. Where can you find The Danyang-Kunshan Grand Bridge, the longest bridge in the world, spanning 102.4 miles (165 kilometers)?
Answer: Beijing-Shanghai High-Speed Railway, China.

54. How many of the world’s tallest mountains are found in the Himalayas?
Answer: 14.

56. Which 2 Asian countries are part of the top three largest economies in the world? Answer: China and Japan.

57. The ‘twin village’, a mysterious village of about 220 official sets of twins, is found in which part of Asia?
Answer: Kerala, South India.

58. Which Indian state observes the bizarre tradition where newborns are thrown from the top of a 50-feet-high tower to symbolize health, wealth, and good fortunes?
Answer: Maharashtra.

59. Which Asian country is on ranked second in the world for countries with the lowest mobile phone density?
Answer: North Korea.

60. In which Asian country will you find the world’s largest archipelago made up of over 17,000 islands?
Answer: Indonesia.

61. What is the highest and largest plateau in the world that is found in Asia and is known as the ‘Roof of the World’?
Answer: The Tibetan Plateau.

62. Which two continents does Asia share its borders with?
Answer: Africa and Europe.

65. Which monument in India was built as a tribute to love?
Answer: The Taj Mahal.

66. The first known Siamese twins were born in which Asian country?
Answer: Thailand.

67. Which Syrian city is said to be the oldest continually inhabited cityin the world?Answer: Damascus.

68. What is the enzyme deficiency that is responsible for the Asian Flush Syndrome, which most East Asians suffer from?
Answer: ADH (Alcohol Dehydrogenase)/ALDH (Aldehyde Dehydrogenase).

70. Which country did Vietnam fight against in the war for their independence in 1946?
Answer: France.

71. South Korea has a separate Valentine’s Day for single people and it is known as the “Black Day”. What day is it celebrated?
Answer: April 14th.

Hope you enjoyed these fun Asia Trivia Questions, please leave a comment and share with your family and friends. Which bird was once used to deliver Olympics results in Ancient Greece? Check out the answer and more 87 Fun Random Trivia Questions and Answers. Also, Check out 120 Fun Countries Trivia Quizzes and Answers.