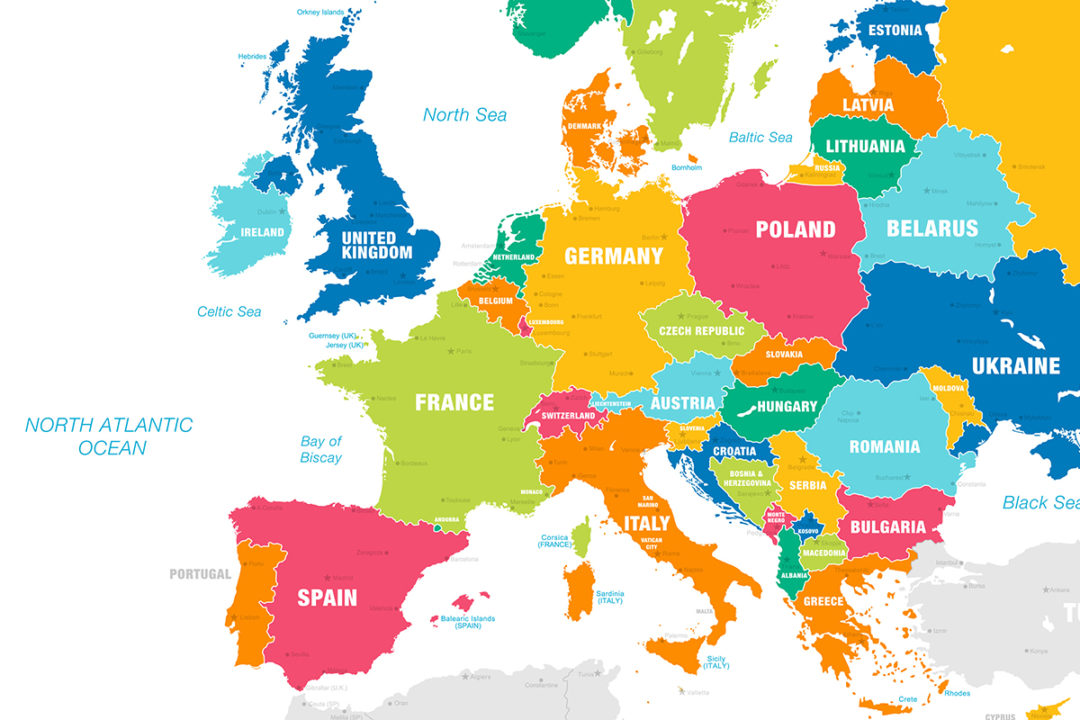 Europe is a continent with a long, fascinating, and extremely important history. Although it is the second-smallest continent by area, it still boasts the third-largest population with around 748 million people!

It is home to some of the oldest civilizations in the world and is home to more UNESCO World Heritage Sites than any other continent.  Did you also know that it is prohibited by law in France to name a pig “Napoleon”? Quite hilarious, but true.

You just really have to trust that there is so much more to find out and know about this continent. That is why these 71 Europe Trivia Questions and Answers have brought to you the most mind-boggling facts about various aspects of geography, lifestyle, and culture on the European continent.

1. Which Greek goddess is the European continent named after?
Answer: Europa.

2. How many countries in Europe are transcontinental, being both European and Asian countries?
Answer: 5.

4. What is the name of the smallest independent state in Europe?
Answer: Vatican City.

5. How many countries in Europe are part of the European Union?
Answer: 27.

6. What is the collective currency of countries within the European Union?
Answer: The Euro.

7. The ceremonial treasures and gemstones which are the most powerful symbols of the British Monarchy are known as what?
Answer: The Crown Jewels.

9. Who did the Brexit Referendum vote out of the European Union?
Answer: United Kingdom.

10. Which European country is the number one tourist destination in the world?
Answer: France.

11. Which sea separates Europe and Africa?
Answer: The Mediterranean Sea.

12. What is the largest spoken native language in Europe?
Answer: Russian.

13. The religion practiced in some parts of Europe, where people still believe in the ancient Greek gods like Zeus, Poseidon or Aphrodite is known as?
Answer: Hellenism.

14. Which country is officially known as the Hellenic Republic?
Answer: Greece.

15. What are the 3 largest countries in Europe?
Answer: Russia, Ukraine, and France.

16. Which plague killed more than half of the European population in the 1300s?
Answer: Black Death.

17. Of the hundreds of rivers in Europe, which one is the longest?
Answer: The Volga River

18. Which country, located at the crossroads of Western Asia and Eastern Europe, has the same name as an American State?
Answer: Georgia.

19. Which European country has the most castles in the world?
Answer: Germany.

20. What body part is depicted on The Isle of Man’s national flag?
Answer: Leg.

21. What are the four countries in the United Kingdom?
Answer: England, Wales, Northern Ireland, and Scotland.

22. Which ancient Roman architecture was once used as an arena for bloody gladiator battles, epic hunts pitting humans against wild animals, and gruesome executions during the Roman Empire?
Answer: The Colosseum.

23. Which city is the most important financial center of the European continent?
Answer: Frankfurt.

24. By which acronym is The European Organization for Nuclear Research better known?
Answer: CERN.

25. In Scotland, there is knighted penguin who serves as the mascot and colonel-in-chief of the Norwegian King’s Guard. What is the name of the penguin?
Answer: Brigadier Sir Nils Olav III.

26. In what modern-day country did the Roman Empire originate?
Answer: Italy.

27. The five prizes are known as “Nobel Prizes” and have their origin in which country in Europe?
Answer: Sweden.

28. Of the “Big Four” fashion capitals of the world, Europe is home to two of them. Which two European cities make the list?
Answer: Paris and Milan.

29. Which British royal is the longest reigning living monarch in the world and how long have they ruled?
Answer: Queen Elizabeth II of England; 70 years.

30. Which country in the UK has a national flag with the image of a dragon on it?
Answer: Wales

31. There are only two places in the world that are completely mosquito free. One is Antarctica and the other is a country in Europe. Which country is that?
Answer: Iceland.

32. Which European city has more bridges and canals than London, Amsterdam, and Venice put together?
Answer: Hamburg.

33. America’s Statue of Liberty was constructed and designed by which European country?
Answer: France.

34. Which country’s coastline is the longest in Europe and the second-longest in the world after Canada?
Answer: Norway.

35. What ocean separates the continents of Europe and North America?
Answer: The Atlantic Ocean.

36. What physical features and geological formations give Iceland the nickname “land of fire and ice”?
Answer: Volcanoes and glaciers.

37. What is the nickname for the great bell of London?
Answer: Big Ben.

38. LakhtaTower, the tallest building in Europe is found in which Russian city?
Answer: St. Petersburg.

39. What part of Europe will you find the little town of Hum, the smallest town in the world, with a population is only 30 people?
Answer: Croatia.

40. What is the most populous capital city in the Nordic countries?
Answer: Copenhagen.

42. Who is the famous French poet and writer who wrote “The Hunchback of Notre Dame” and is honored with a street named after him in nearly every city in France?
Answer: Victor Hugo.

43. Which marveling prehistoric British monument is claimed to be one of the oldest monuments in the world and to date, still poses the mystery as to why it was built, how it was built and what it was used for?
Answer: Stonehenge.

44. What are the highest and most extensive mountain range systems in Europe?
Answer: The Alps.

45. What is the highest mountain in the Alps, and of course in Europe?
Answer: Mont Blanc.

46. Which architectural masterpiece of Spain has been under construction for the past 138 years (since 1882), and still hasn’t been completed?
Answer: La Sagrada Familia.

47. What does UEFA stand for?
Answer: Union of European Football Associations.

48. In which Greek city can you find the ancient citadel of Acropolis?
Answer: Athens.

49. In which European city is the EU headquarters based?
Answer: Brussels, Belgium.

50. Which day of the week do the Swiss consider a rest day, in which noisy activities and chores and anything that will interfere with relaxation are prohibited?
Answer: Sunday.

51. The European town with the longest letters in its name in Wales. How many letter words does the town name carry?
Answer: 58.

52. Warsaw is the capital city of which country?
Answer: Poland.

53. Which country has more bicycles in it than there are people?
Answer: Netherlands.

54. What is the most populous city in Europe?
Answer: Istanbul.

56. Which place in Europe sells out more chocolate than anywhere else in the world?
Answer: Brussels Airport.

57. While dozens of countries in Europe have chopped and changed their names over the years, this country has stuck with the same name since it adopted it in 681 AD. What is the oldest European country by name?
Answer: Bulgaria.

58. Which city of Spain is the first and only city in the world to have received the Royal Gold Medal for architecture?
Answer: Barcelona.

59. What is the name of the machine designed for carrying out executions by beheading and was commonly used in France during the French Revolution?
Answer: Guillotine.

60. Which European country is credited as the happiest country in the world?
Answer: Finland.

61. Which church in Rome is the largest church in the world?
Answer: St. Peter’s Basilica.

62. Which war was responsible for destroying four European empires; the German, Russian, Ottoman, and Austro-Hungarian empires?
Answer: World War I.

63. Which company is the biggest in Europe in terms of revenue?
Answer: Volkswagen.

64. Which country in Europe is the oldest surviving republic in the world?
Answer: The Republic of San Marino.

65. What name is used to refer to France because of the shape of its territory?
Answer: “The Hexagon”

66. On what day does Finland celebrate its National Day for Failure?
Answer:13 October.

67. When drinking beer in Hungary, what should you NEVER do?
Answer: Clink glasses.

69. Is Scandinavia and the Nordics the same?
Answer: No.

70. Which Swiss military unit requires that its recruits must be unmarried Swiss, Catholic males between 18 and 30 years of age who have completed basic training with the Swiss Armed Forces?
Answer: The Swiss Papal Guard.

71. What was the religious event that was in effect when the Great Earthquake of Lisbon occurred on November 1, 1755?
Answer: All Saints Day.

Hope you enjoyed these fun Europe Trivia Questions, please leave a comment and share with your family and friends. Which bird was once used to deliver Olympics results in Ancient Greece? Check out the answer and more 87 Fun Random Trivia Questions and Answers. Also, Check out 120 Fun Countries Trivia Quizzes and Answers.