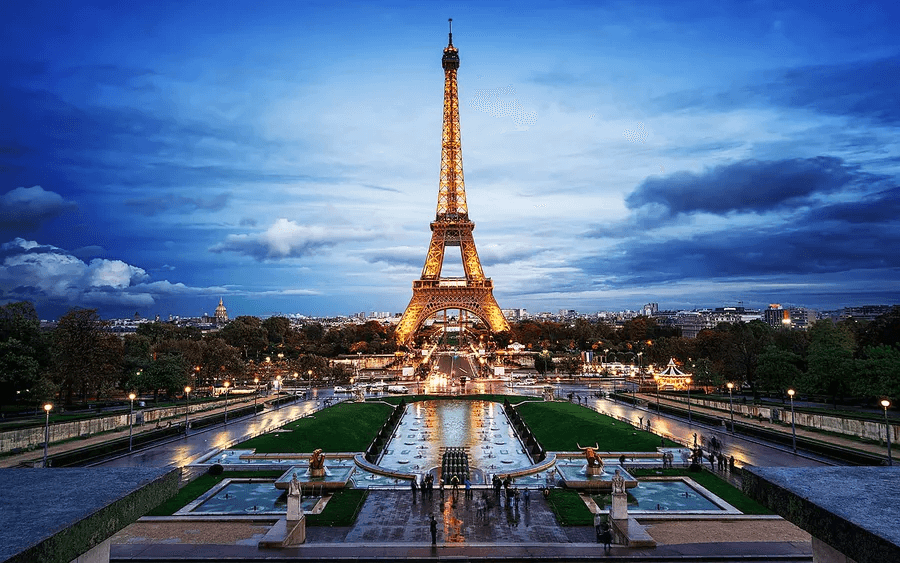 There are so many interesting landmarks littered in almost every nook and cranny of our planet; not to mention the fascinating historical stories that go with them!

I’m sure you would not be able to easily imagine that the Great Wall of China was not built with a regular mixture of sand and cement. The ‘prisoner’ builders used processed rice flour as an adhesive to put the bricks together! Some people might also confuse the Acropolis and the Parthenon as the same thing. Are they really?

You’ll surely find out about that and more in this well-researched, fact-filled article about some of the popular landmarks of the world. If you’re a big fan of discovering new places in the world, then these fun facts will surely excite you!

1. The bell inside London’s clock tower is called ‘Big Ben’ and not the tower itself.

2. One significant difference between The Sphinx in Egypt and the one in Greece is the face. In Egypt, it has the head of a man and in Greek mythology, it carries the head of a woman.

3. The Eiffel tower has its own official paint color called Eiffel Tower Brown.

4. There is a duplicate of the Taj Mahal temple in Bangladesh. It was created so the poor people of Bangladesh could see the Taj Mahal without the cost of visiting India.

5. The Great Pyramids of Egypt are not found in a lone desert, contrary to what most online pictures may make you assume. In reality, they are located just a few minutes away from the city of Giza.

6. The Colosseum in Rome was built to host violent, blood-thirsty gladiatorial shows (i.e. the fight-to-death games) as a way of entertaining spectators.

8. The Neuschwanstein Castle in Germany was the inspiration for the castles in Disney’s Sleeping Beauty and Cinderella cartoons.

9. The Leaning Tower of Piza did not start leaning overnight! It began to lean in on one side in 1178 and it was only in 2008 that engineers stated that the Tower had stopped moving.

10. Asides from being an architectural marvel, the Hagia Sophia in Istanbul used to be a church, and then it became a mosque and now, it is a museum!

11. When the Blue Mosque was built, Mecca was the only other time in the world with six minarets just like it has, thus paving way for criticisms against the Sultan.

12. Dedicated to the French revolution, the Arc de Triomphe has the names of all French victories and generals inscribed on its inner and out surfaces.

13. KatiePerry used the courtyard of the Royal Palace of the Buda Castle in Hungary, to film one of her music videos; ‘FIREWORK.’

14. Mr. Gustave Eiffel, whom the Eiffel Tower of Paris was named, was the engineer behind the construction of the tower, but he did not design the building.

15. The Great Pyramid of Giza, Egypt is the only last remnant of the Seven Wonders of the Ancient World.

16. The Great Barrier Reef in Australia is not only one of the most colorful places on Earth but also the planet’s largest coral reef system.

17. The Angkor Wat Temple is featured on the national flag of Cambodia, thus making Cambodia the only country in the world with the image of a building on its national flag.

18. The pillars holding the Taj Mahal were constructed to fall outwards in case of a collapse, so as to prevent it from falling on the Emperor’s tomb.

19. Petra, Jordan is called the “Rose City’ because of the pink color of the stone the landmark was carved from.

20. Machu Picchu is built 60% of underground. It was carefully built to withstand an earthquake.

21. The Great Wall of China was built by 6 different Chinese dynasties, and it is the longest man-made structure in the world.

22. The Great Wall is also called ‘The longest graveyard in the world,’ as it is estimated that around 400,000 builders died while building the wall.

23. Mount Everest was originally named ‘Sagarmatha’ by the Nepalese, meaning, “goddess of the sky.” It was renamed in honor of the British surveyor, George Everest.

24. The fastest ascent of Mount Everest from the Everest South Base camp happened in only 10 hours, 56 minutes; by LhakpaGelu Sherpa of Nepal.

25. Although it is built on water, the dramatic torii gate of the Itsukushima Shinto Shrine, Japan, and the temple itself don’t float on water, contrary to what it looks like.

27. Sadly, many of the ancient artifacts from the Acropolis are not in Greece today. One of them, the Elgin Marbles, is housed in the British Museum.

28. The Colosseum of Rome was actually built with stolen money and it took only 8 years to erect the structure.

29. Also, the real name of the Colosseum is the Flavian Amphitheatre. It was named after Emperor Vespasianus Flavius who built it.

30. The mysterious opening in the center of the Pantheon of Rome is known as the ‘oculus’. It means ‘eye’ in Latin.

31. The most fascinating thing about Chichen Itza in Mexico is that to date, no one knows why the inhabitants of the city suddenly ceased to exist or where they went to.

32. The Pyramid of Kukulkan in Chichen Itza has 365 steps; 91 on every 4 sides and one at the top which equals the number of days in a year.

33. It took around 3000 sculptors and 90 years to carve out the Leshan Giant Buddha. Today, it is the largest stone-carved Buddha in the world.

34. To date, scientists have not yet figured out how the Stonehenge monument of England came to be, who built it, and what purpose it was actually used for.

35. The Forbidden City in Beijing, China is the world’s largest imperial palace.

36. In order to maintain the neatness of the palace, the craftsmen of the Forbidden City used a couple of tactics to build the roofs in the palace so that birds cannot land on them.

37. George Washington, Theodore Roosevelt, Abraham Lincoln, and Thomas Jefferson are the four US presidents whose faces are carved in on Mount Rushmore.

38. The Empire State building is less than half the height of BurjKhalifa. It doesn’t come close in height at all.

39. Barcelona’s Sagrada Familia has been under construction for 138 years and it is still not finished!

40. The word defenestration (i.e. the act of throwing someone out of the window) was created because of an incident that occurred at the Prague Castle, in 1618.

41. Windsor Castle in England is the largest and the oldest inhabited castle in the world.

42. There are pillars inside the SagradaFamiliabuilding which are constructed to resemble giant trees. The sight is so pleasurable!

43. The600 feet tallSigiriyaRock Fortress in Sri Lanka served as both a palace and a fortress for the treacherous King Kashyapa against his brother.

44. The state of Liberty has a crown with seven points, each of which represents the seven continents and the seven seas.

45. The torch of the Statue of Liberty had also previously served as a lighthouse that ships coming into the New York harbor used as navigational aid.

46. In 1927, when airlines started flying over Peru and the Nazca region, passengers reported strange lines, figures, and shapes on the ground. They were the Nazca Lines!

47. Some Bible scholars claim the Wadi Rum of Jordan is referred to as Aram or Iram in the book of Genesis. Some others affirm it is the land of Uz we find in the book of Job.

48. The HOLLYWOOD sign in Los Angeles did not initially symbolize the movie culture. It was originally put up as a way to improve real estate sales in the Hollywood district.

49. Also, 4 letters on the HOLLYWOOD sign were removed. It used to spell, “HOLLYWOODLAND”.

50. Although the Sahara Desert covers a large 31% of Africa’s landmass, it is not the largest desert in the world. That fact is only a misconception!

51. The Valley of the Kings in Egypt has been a royal burial complex for almost 500 years and it holds the tombs of some Ancient Egyptian royalties, like Tutankhamun,

52. The Fish River Canyon is the second largest canyon in the world after the Grand Canyon in the USA.

53. The Twelve Apostles of Australia is not a monument of the disciples of Jesus. It is the collective name for a group of rocks.

54. Despite the name, the Twelve Apostles were never 12 rock stacks. They were originally 9 rocks but only 7 of them are standing today.

55. The Dark Hedges of Ireland was featured in the world acclaimed movie series, Game of Thrones.

56. The Marina Bay Sands of Singapore is home to the world’s longest rooftop pool; the longest elevated infinity rooftop pool there is!

57. Le PalaisIdéalis not your regular royalty castle. It was built by a common postman as a fulfillment of his dreams of wanting to create a fantastic palace

58. Ferdinand Cheval was 43 when he started building Le PalaisIdéaland it took him 33 years of collecting stones to be able to build the palace ALONE, all by himself!

59. The Borobudur Temple compounds in Indonesia are home to the largest Buddhist structure in the world

60. Tikal, Guatemala, is the second largest ancient Mayan city and in fact, it was the Mayan capital.

61. At the base of the Christ the Redeemer Statue in Rio de Janeiro, there’s a church where people can get married.

62. The enormous stone statues of Chile’s Easter Island are called ‘moai,’ and there are about 1000 of them scattered on the island.

63. Japan’s Mount Fuji is actually made up of 3 separate volcanoes, and it is one of the sacred symbols of Japan.

64. Another fun fact about Mount Fuji is that it is the most climbed mountain in the world.

65. The Mausoleum of Halicarnassus (the tomb of Mousolus, a very powerful Persian satrap) is the origin of the word ‘mausoleum,’ used to refer to a building that houses a tomb.

66. The Christ the Redeemer statue of Rio de Janeiro is the world’s largest art deco statue of Jesus.

67. It takes about 4 days to climb Machu Picchu and complete the awesome Inca Trail trek.

68. Victoria Falls in Zambia is neither the widest nor highest waterfall in the world, but it forms the largest curtain of falling water on Earth.

69. Jeju Islands is the most popular honeymoon destination for newly wedded in South Korea. It is also dubbed ‘The Hawaii of Korea”.

70. The Salar de Uyuni in Bolivia is the largest salt desert in the world and it is estimated to contain 10 billion tons of salt.

71. If you’re looking for a place known as the world’s largest natural mirror, it is Salar de Uyuni!