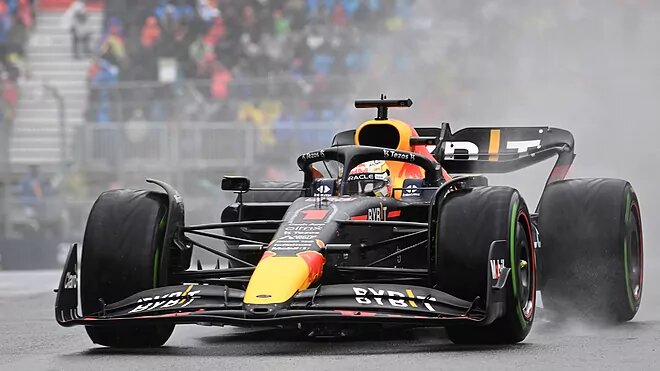 Filled with high velocity and adrenalin, expensive cars, strategies, pit stops, mind games, overtakes, car stunts, and what have you, the revving sounds of F1 car engines will have your heart racing in anticipation! I’ll tell you one fun fact for free: – F1 drivers pee in their suits while on track, as there’s no time to head to the toilet during a race! Gross, huh? But it is true!

For some, F1 car racing is reckless and just too dangerous to be any fun. But for lovers of this motorsport, we know how intriguing it is to watch and experience this sports tournament. These  Formula 1 Trivia Questions and Answers are the right quiz test for you to take to see how much encyclopedic knowledge you have about F1. Enjoy!

1. Who is the only driver to have won the Triple Crown of Motorsport?
Answer: Graham Hill.

2. Nicknamed El Maestro (“The Master” or “The Teacher”), which legendary racing driver won the World Championship of Drivers five times, a record that stood for 46 years until it was beaten by Michael Schumacher?
Answer: Juan Manuel Fangio.

3. During the opening lap of the 2020 Bahrain Grand Prix race, which racing driver’s car crashed into the metal race barriers at full speed and split into two?
Answer: Romain Grosjean.

4. Which annual award honoring the achievements of an individual or team in Formula One racing was named after an Italian driver who died in a major accident at the 1967 Monaco Grand Prix?
Answer: The Lorenzo Bandini Trophy.

5. Who is the only African driver to win the Formula One World Championship?
Answer: Jody Scheckter.

6. Which Italian racing driver was the first woman to ever race in Formula One?
Answer: Maria Teresa de Filippis.

7. Before the start of which Grand Prix are manhole covers welded down along the track because the downforce created by an F1 car has enough suction to pull them up?
Answer: The Monaco Grand Prix.

8. What does ‘DRS’ stand for when it comes to overtaking?
Answer: Drag Reduction System.

9. Who was the first official Formula One World Champion?
Answer: Giuseppe Farina.

11. Due to their aerodynamics, F1 cars can technically drive upside down. True or False?
Answer: True.

14. How many races are there in the standard F1 Grand Prix Calendar?
Answer: 23.

15. Having finished as championship runner-up four times and in third place the other three times, who is this legendary driver often described as “The greatest driver to never win the world championship” in F1 racing?
Answer: Sir Stirling Moss.

18. In which country was ‘Grand Prix’ first used to describe a race?
Answer: France.

21. How much bodyweight do F1 drivers lose in a single race?
Answer: About 2kg.

22. How hot does the temperature in a cockpit get during an F1 race?
Answer: 50 degrees Celsius.

24. Today Formula One, along with the Olympic Games and the FIFA World Cup, is one of the most publicized events. What was its global audience in 2020?
Answer: 433 million.

25. In 1997 Canada issued a stamp to honor which racing driver who died in a crash caused by a collision with a car during qualifying for the 1982 Belgian Grand Prix?
Answer: Joseph Gilles Henri Villeneuve.

26. As of the 2021 F1 season, which two drivers are tied in the first spot with the most titles won?
Answer: Lewis Hamilton and Michael Schumacher.

27. Who was the last driver to lose his life during an F1 Championship race? He died at the 2014 Japanese Grand Prix.
Answer: Jules Bianchi.

28. Present since the very start of the sport, which team has taken the number one spot on almost all Constructor records in F1?
Answer: The Ferrari team.

30. Nicknamed ‘The Bear’ which 1967 Formula One World Drivers’ Champion during the early part of his career preferred to race barefoot as he believed that it gave him a better feel of the throttle?
Answer: Denny Hulme.

31. Earning £22 million in salary, who is the highest-paid F1 driver?
Answer: Lewis Hamilton.

32. What is the longest circuit of all F1 race tracks to have hosted a Grand Prix?
Answer: Pescara Circuit, Italy.

33. What name is given to a person responsible for directing the driver where his pit box is, when to put his car in first gear and when to leave the pit box when the driver comes into the pits during the race?
Answer: The lollipop man.

34. Inspired by American bomber pilots in WWII, which racing driver has made it a tradition to name his cars mostly after girls?
Answer: Sebastian Vettel.

35. How long did the fastest pit stop last? And which team achieved the feat?
Answer: 1.82 seconds. Achieved by Redbull.

36. What is the collective name tag for McLaren, Williams, Renault (formerly Benetton), and Ferrari teams in F1?
Answer: The “Big Four”.

37. The longest pit stop in F1 history involved the Mercedes team dislodging the right wheel from Valterri Bottas’ car. How long did it take?
Answer: 43 hours and 15 minutes.

38. Being an exclusive boy’s club, Formula One tends to be male-dominated. How many women have ever qualified to race in a Grand Prix?
Answer: 2.

39. To save weight and space, Formula 1 cars have no leverage or reverse button. True or False?
Answer: True.

40. F1 drivers must withstand how much gravitational force of their body weight at the time of braking at the end of the straight lines, and in the high-speed corners?
Answer: 4-5 times their body weight.

41. Which racing driver was killed during practice for the Italian Grand Prix in 1970 and became the only driver to be posthumously awarded the Formula One World Drivers’ Championship?
Answer: Jochen Rindt.

42. With up to 150 people working on composite parts of the car at any one time, how long does it actually take to build an F1 car?
Answer: 7 days.

43. Who is the oldest winner of a Formula 1 race, who won the 1951 French Grand Prix after completing his 53rd birthday?
Answer: Italian Luigi Fagioli.

45. What is the popular group name for these F1 drivers – Guiseppe ‘Nino’ Farina, Luigi Fagioli and Juan Manuel Fangio?
Answer: The ‘Three Fs’.

46. In the pit lane it is permissible to use powered devices to lift the cars. All jacks for example can be automatic. True or False?
Answer: False.

47. Once a race has finished an F1 car’s tires will still be hot enough to cook an egg. What is its heat temperature at that time?
Answer: Around 120° centigrade.

48. If a driver leaves the car during the race they have to be weighed before getting back in. Why is that?
Answer: F1 cars have a minimum allowable weight.

49. What license must F1 drivers who wish to participate in the competition have?
Answer: A FIA Super License.

50. After winning the Pole Trophy in the 2019 season, who became the youngest driver ever and the first non-Mercedes driver to win it since the trophy’s inception in 2014?
Answer: Charles Leclerc.

51. After Ayrton Senna’s fatal crash in 1994 staff found an Austrian flag in the Brazilian driver’s car. He had intended to fly it after the race as a mark of respect for which driver had died following a crash during qualifying?
Answer: Roland Ratzenberger.

53. Which country has the most F1 Championship-winning drivers with 10 drivers?
Answer: UK.

54. How many countries have hosted a Grand Prix since the first Formula One Championship in 1950?
Answer: 69.

55. Which Formula 1 Championship experienced the most driver fatalities with four drivers losing their lives in track accidents?
Answer: The 1958 F1 Championship.

56. In 1953, how many cars lined up for the German Grand Prix making it the busiest Formula One race ever?
Answer: 34.

57. For easy identification, every car and driver in Formula 1 is always assigned a number. Which number has only been assigned twice in the history of F1 racing, in the 1963 Mexico Grand Prix and the 1976 British Grand Prix?
Answer: 13.

59. F1 racing engineers have found out that it’s impossible to start the engine of an F1 car when it is cold. So, what is the regular practice done on the cars before they are used for a race?
Answer: The cars are pre-heated before use.

60. What part of an F1 car can heat up to 1,000 CC˚C, which is comparable to the temperature of molten lava?
Answer: The brake discs.

62. Why is it important for F1 drivers to stay hydrated during the race?
Answer: Due to the intense heat from the F1 car and the cockpit.

64. F1 cars are not allowed to be refueled during the match as it will pose a danger to the pit crews, so F1 cars are already loaded with enough fuel before the race. When did this rule start?
Answer: 2010.

65. Which three prestigious motor races make up ‘The Triple Crown of Motorsport’?
Answer: The Indianapolis 500, the 24 Hours of Le Mans, and the Monaco Grand Prix.

66. The Bahrain International Circuit has only one named corner (the hairpin Turn 1.) Which legendary racing driver was the turn named after?
Answer: Michael Schumacher.

67. Which is the shortest Formula One circuit at 3,340 kilometers?
Answer: Circuit de Monaco, the Monaco Grand Prix.

68. Who is the only driver in F1 history to have been champion for both Ferrari and McLaren?
Answer: Niki Lauda.

69. Which American racing driver is the first to have won races in Sports Cars, Formula One, NASCAR, and Indy cars?
Answer: Dan Gurney.

70. What is the name of the high-end hospitality package offered to VIPs at Grand Prix races in various countries of the world?
Answer: The F1 Paddock Club

71. Who was the first reigning champion to have retired from F1 in 1993?
Answer: Alain Prost.

Did you enjoy these fun Formula 1 trivia questions? Please leave a comment below and share if you like the content. Do you know that Wife Carrying is a sport?  Check out 30 weird sports around the world and 86 Fun Sports Trivia Questions and Answers