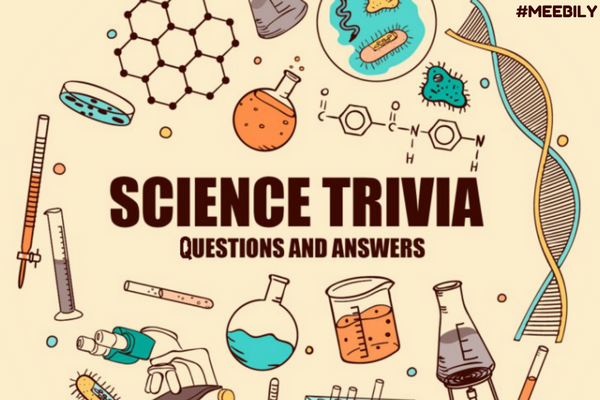 Science is the one sure way we can learn more about how the world and our environment work and also make new discoveries. Every branch of science is full of knowledge and interest; Biology, Chemistry, Physics, Astrology, and a lot of other branches.

Are you looking for a way to make learning the subject of science an engaging and entertaining one for your kids? Or do you need some science quiz questions that will spark their young curiosities? These science trivia questions and answers are perfect for testing what kids know and expanding their knowledge so they get to appreciate more about the world around us. After all, it’s always good to start them young; you never know who the next big scientist will be! So get ready for some Science-ing.

1. The large spiral galaxy that contains the Earth’s Solar System is known as?
Answer: Milky Way.

2. What is Earth’s only natural satellite?
Answer: Moon.

3. What part of the plant conducts photosynthesis?
Answer: Leaf.

4. What are the three states of matter?
Answer: Solid, Liquid, and Gas.

5. Which pigment gives the leaves their green color?
Answer: Chlorophyll.

7. What is energy in motion?
Answer: Kinetic energy.

8. Which biologist proposed the theory of evolution through natural selection?
Answer: Charles Darwin.

9. Which system of the body controls the senses?
Answer: Nervous system.

11. Which is the rarest blood type in humans?
Answer: AB negative.

12. What is the standard unit for measuring energy?
Answer: Joule.

13. What is the name of the planet that spins the fastest and completes one whole rotation in just 10 hours?
Answer: Jupiter

14. Animals that eat both plants and animals are called?
Answer: Omnivores.

15. What is DNA?
Answer: Deoxyribonucleic Acid.

16. A single piece of coiled DNA is called?
Answer: Chromosome.

17. A planet found outside of our solar system is called?
Answer: Extrasolar planet or Exoplanet.

18. Which is the closest planet to the sun?
Answer: Mercury.

20. Which cell organelle is also called the “powerhouse of the cell?”
Answer: Mitochondrion.

21. What part of the skeletal system protects the brain?
Answer: The Skull.

22. “For every action, there is an equal and opposite reaction.” It is which of Newton’s laws of motion?
Answer: Third Law.

23. What is the Geiger counter used to measure?
Answer: Radiation.

24. The medicine that is given to fight bacteria but not viruses is known as?
Answer: Antibiotic.

25. The process in which a substance transforms directly from the solid phase to the gaseous phase, without undergoing the liquid phase is known as?
Answer: Sublimation.

26. What is the layer which protects our earth from harmful rays?
Answer: Ozone.

27. What type of animals suckle their young ones?
Answer: Mammals.

28. What is the essential gas that humans need to breathe?
Answer: Oxygen.

29. What will be the resulting state if you boil water?
Answer: Steam.

32. What is the most important element that makes up a nuclear bomb?
Answer: Uranium.

33. ‘K’ is the symbol of which chemical element?
Answer: Potassium.

35. All planets orbit around which object?
Answer: The Sun.

36. What is the chemical formula of water?
Answer: H2O.

38. Which pigment determines the color of the human skin?
Answer: Melanin.

39. What is the hot liquid rock surface under the Earth?
Answer: Magma.

40. What is it called when lava and gas are released from a volcano?
Answer: A volcanic eruption.

41. A human skeleton is divided into parts. What are they?
Answer: The Axial and Appendicular skeleton.

42. What is the mineral necessary for strengthening the human bones?
Answer: Calcium.

44. What is the world’s tallest grass?
Answer: Bamboo.

45. What is the process by which molecules of a solvent tend to pass through a semi-permeable membrane from a less concentrated solution into a more concentrated one?
Answer: Osmosis.

47. What is the quality of an object that allows it to float on water?
Answer: Buoyancy.

48. What is the force of attraction between any two objects in the universe?
Answer: Gravitational force.

50. A person who is specially trained to travel into outer space is known as?
Answer: An Astronaut.

51. Optics is the scientific study of the eye. True or False?
Answer: False. It is the study of light.

52. What is the effect of the sudden slipping of the Earth’s tectonic plates?
Answer: An earthquake.

53. ATP is the molecular unit of energy that gives our body fuel on a cellular level. What does ATP stand for?
Answer: Adenosine Triphosphate.

54. Chloroplasts can be found in animal cells. True or false?
Answer: False.

55. What is it called when you make light change direction by passing it through a lens?
Answer: Refraction.

56. What material is the human hair and nails made up of?
Answer: Keratin.

57. Where can you find the smallest bone in the human body?
Answer: The Ear.

58. Which is the hottest planet in our solar system?
Answer: Venus.

59. Diabetes develops as the result of a problem with which specific organ in the body?
Answer: The Pancreas.

60. What name is given to the different layers of gas that surround the earth?
Answer: Atmosphere.

61. What sugar-rich liquid do bees collect and use to create honey?
Answer: Nectar.

62. What are the three layers of the earth?
Answer: The Crust, the Mantle, and the Core.

64. The scientific study of plants is known as?
Answer: Botany.

65. Animals without backbones are known as?
Answer: Invertebrates.

66. Which place is no longer a planet?
Answer: Pluto.

67. What is the name of the liquid component of the human blood?
Answer: Plasma.

68. What animal species can live on both water and land?
Answer: Amphibians.

69. What is the outmost layer of the earth’s atmosphere?
Answer: Exosphere.

71. Where does sound travel faster; water or air?
Answer: Water.